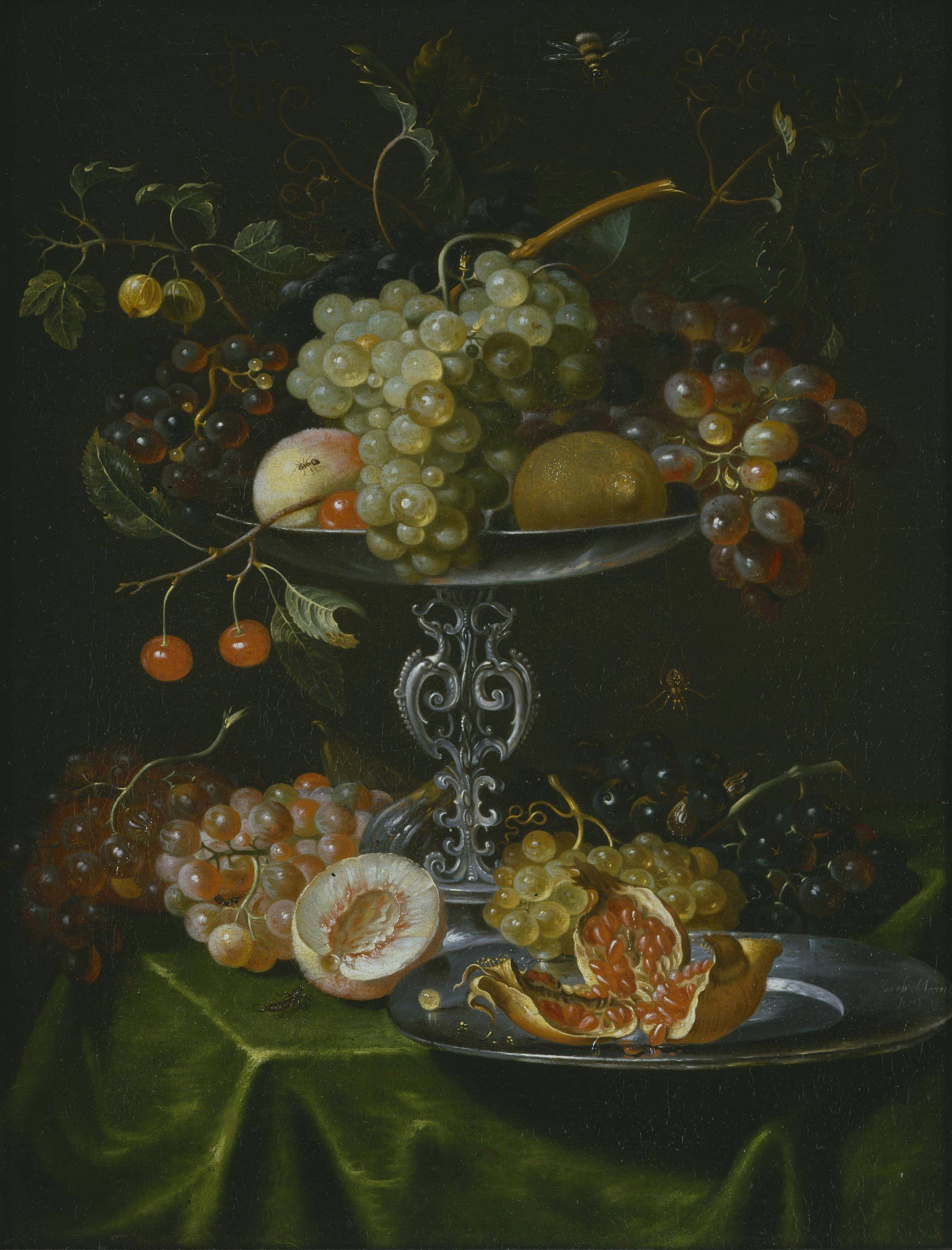 Keep me updated about Jacob Marrel:

A Still Life with Grapes, Pomegranates and Peaches in a Silver Dish

Standing on a table, covered with a green cloth, is an elaborate silver tazza, over-flowing with fruit, including bunches of black and green grapes, a peach, a lemon and branches of gooseberries and cherries.  On the table, are more grapes, a fig and half a white peach.  Teetering on the edge of the table, is a pewter plate, on which appears a pomegranate, split open to reveal a profusion of glistening red fruitlets.  An earwig stretches its antennae towards the sweet flesh of the peach, a spider descends on a silken thread from the rim of the tazza and a bumble bee hovers above the dish.

Jacob Marrel was a painter, draughtsman and engraver, as well as an art dealer.  Although he was born in Germany and spent the greater part of his life in Frankfurt, he may, nevertheless, be regarded as belonging to the Dutch School.  Marrel lived for extended periods of time in Utrecht and his still-life paintings were influenced primarily by artists who were active there.  Having trained in Frankfurt with the still-life painter Georg Flegel (1566-1638), Marrel moved to Utrecht in 1632.  The young artist was doubtless drawn to the city because of its pre-eminence as a centre of flower painting and his early flowers pieces are strongly indebted to the work of Roelandt Savery (1578-1639) and Ambrosius Bosschaert the Younger (1609-1645).  Towards the end of his Utrecht period, Marrel fell under the spell of the celebrated still-life painter Jan Davidsz. de Heem (1606-1683/4), who was by then working in Antwerp.  After returning to Frankfurt in 1651, Marrel continued to make regular visits to Utrecht, perhaps in connection with his art dealing activities.

Marrel is probably best known for his paintings of sumptuous vases of flowers, standing on a ledge or in a niche, but from mid-century onwards, he also painted a small number of modestly-sized fruit pieces and larger luxury still lifes containing fruit, flowers, precious glass and metal objects and the occasional live bird.  These were chiefly inspired by Jan Davidsz. de Heem and, to a lesser extent, Marrel’s former pupil, Abraham Mignon (1640-1679).  The present painting is a late work, painted when the artist was residing once again in Frankfurt.  Although the last digit of the date is illegible, it seems likely that the painting is dateable to the mid-1670s, on the basis of a close comparison between the silver dish of fruit seen here and one which appears as the centrepiece to an elaborate pronk still life of 1675, depicting fruit, game birds and a lobster in the Staatliche Museen, Kassel and another version of the Kassel painting, dated 1676 (i).  The present painting’s rather graphic quality and bright red/green palette, which recall the work of Abraham Mignon, are characteristic of Marrel’s late style.

In this modestly conceived composition, Marrel employs a simple, but elegant design.  Great attention has been lavished on the meticulous description of the surface textures of different kinds of fruit and fine metal-ware: for example, the velvety skin of the peach and its succulent white flesh, the dusty bloom on the grapes and the shiny, jewel-like seeds of the pomegranate, clinging to their pithy casing.  Yet, amid such perfection, an insect-ravaged leaf and a few over-ripe grapes sound a gentle word of warning which hints at the inevitable decay of all living things.

Jacob Marrel was born in 1613/14, the son of a Huguenot couple who settled in the Protestant sanctuary of Frankenthal in Germany.  In 1624, his family moved to Frankfurt where, in 1627, he became a pupil of the still- life painter, George Flegel.  By 1632, he had settled in Utrecht, where two years later he produced his earliest known paintings in oils.  He was back in Frankfurt in 1637, but probably only for a short time.  In 1641 he married Catharina Eliot in Utrecht and, in 1646, he was mentioned as an art dealer.  After the death of his first wife in 1649, Marrel returned to Frankfurt where, in 1651, he married Johanna Sibylla Heimius, the widow of the famous engraver Matthäus Merian.  Jacob’s step-daughter, Maria Sibylla Merian and Abraham Migon became his pupils.  It seems that from this time on, he lived principally in Frankfurt, where he died in 1681, but he must also have made regular visits to Utrecht, probably in his capacity as an art dealer.

Keep me updated about Jacob Marrel: