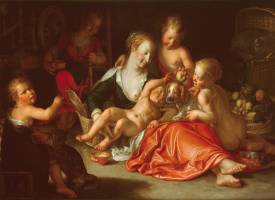 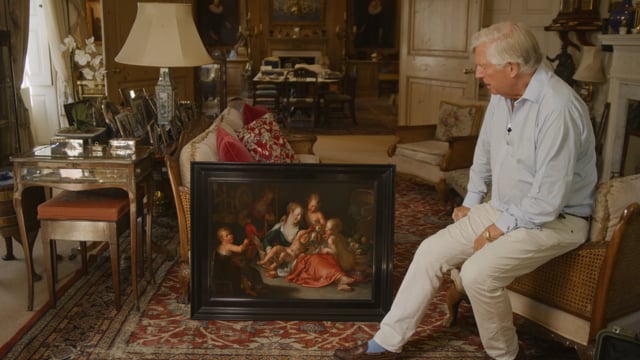 Note: We are grateful to Anne W. Lowenthal for confirming the attribution of the painting on the basis of a colour transparency.  She has also confirmed that the picture will be included in any future update of her 1986 publication, Joachim Wtewael and Dutch Mannerism.

Essay
In Christian theology charity is the most important of the three virtues.  So states Saint Paul in the First Letter to the Corinthians: “And now abideth faith, hope, charity, these three: but the greatest of these is charity” (I Corinthians 13:13).  In practice, the word “charity” can be taken to mean “love” and in the eyes of the Church, it was both the love of God – amor dei – and love of one’s fellow-man – amor proximi.  The subject of Charity had a long tradition in Christian art and by the seventeenth century it was generally represented by images of motherhood. Such pictures invariably showed a young woman surrounded by her children, with emphasis placed upon her loving care in nurturing them.

In this enchanting painting, Joachim Wtewael sets the scene in a seventeenth-century Dutch home.  A young mother is seated on the floor surrounded by her five children.  Her arm rests on an open basket, while her youngest, still a babe in arms, lies across her lap.  He has been feeding at her breast, but distracted by his two older siblings playing with a brown and white spaniel, now turns to join in the play.  One of the children teases the good-natured animal by rolling an apple on its head, while the other fondles it affectionately.  An earthenware porringer with a silver spoon rests on the floor nearby.  Seated in the shadows at the back of the room is an older girl, who eats from a similar bowl while watching the antics of her younger siblings.  The sense of contentment displayed by this family group is in stark contrast to the anguished expression of the youngster seated in the left-hand corner, who recoils in pain from the needle-sharp claws of a cat, which scratches his leg in its attempts to steal from his bowl.

The children’s expressions have been most charmingly rendered and the furnishings of the room closely observed throughout – from the child’s wickerwork cot, to the ladder-back chair, spinning-wheel and the stoof (low open box warmed by a brazier).  A soft chiaroscuro envelops the back of the room, infusing it with atmosphere.  A warm glow emanating from the hearth at the extreme left illuminates the foremost figures, tingeing with coppery hues their little cheeks, lips, fingers and toes.  The mellow colour scheme evokes a general sense of well-being.

In addition to the allegorical significance of the whole, the picture contains other elements that convey symbolic meaning.  In seventeenth-century Dutch art, cats have a number of different associations and meanings depending on the context.  Their unbiddable and independent nature generally gives rise to negative connotations, unlike dogs, which are usually seen in a positive light and are most often associated with fidelity and loyalty.  Dutch writers saw the contrasting qualities of these two animals – “Goed honds, kwaad kats” (good dogs, wicked cats) as opposing sides of human nature.  In this painting, the household pets conform to their stereotypes and, as companions for the playful youngsters, serve as metaphors for the upbringing of children.  The cat, true to its wily nature, symbolises carnal appetite, or the untamed instincts of the young, which must be curbed through discipline and education, while on the other hand, the amiable spaniel is the embodiment of docility, or the willingness to learn (Leersucht).  The brazier and the fire may stand for sensual love, while the apple is no doubt a reference to the Tree of Knowledge and symbolises the choice between good and evil.

Including this newly discovered painting, Wtewael turned to the subject of Charity at least five times during the course of his career.  That the different versions vary widely in terms of date, style, size and conception is characteristic of the artist, who seldom repeated his compositions, preferring instead to seek out new solutions each time.  A tiny oval Caritas on copper (i), dating from the first decade of the seventeenth century, is probably Wtewael’s first representation of the theme.  In this painting, which takes its inspiration from contemporary Italian models, the artist adheres to a traditional scheme, depicting a young woman in a close embrace with three children, one of whom suckles at her breast.  Also conceived in an Italianate manner, is a much larger rectangular panel in upright format, dated by Lowenthal to the late teens or early 1620s, which appeared at Christie’s in New York in January 2013 (ii).  In this version, Charity is personified by a young mother, seated Madonna-like on a low dais against a dark background, nursing a baby at her breast, with four older children gathered about her.

In the present painting, which is signed and dated 1623, Wtewael has revised and updated the traditional theme.  By conceiving his allegory in a contemporary Dutch setting, he distanced it from its religious origins, while transferring its meaning to a wholly secular scene.  This process of carrying over of meaning from a clearly allegorical mode to a more realistic one is a phenomenon we encounter quite often in Dutch art in the first decades of the seventeenth century, a period during which a new visual language evolved in parallel with the emergence of new independent genres.  Thus, in Wtewael’s interpretation of the time-honoured theme, the symbolism of the picture loses none of its potency, but the richly observed, naturalistic genre details add greatly to its appeal.

Wtewael also took a genre-like approach in a closely related version of the subject, currently with Simon Dickinson Limited, London.  Dated 1624, the painting is similar in conception, but smaller and generally more broadly handled.  In that version, a young mother, with four children, is pictured seated in a bakermat (a low wicker chaise in which to tend infants) before a blazing fire.  The painting shares many of the same motifs and furnishings with ours, but is less richly detailed.  Like ours, it includes a mischievous thieving cat that claws one of the children, but instead of the dog, it features a monkey eating a stolen apple.

Wtewael finally returned to the theme of Charity in 1627 (iii), the last year for which dated works by the artist are known.  In this painting, the latest of Wtewael’s interpretations of the subject, the mother is once again presented as a contemporary, rather than a classical exemplum.  She is seated in a chair before a dark background, with a babe in arms and three other children.  Although the figures and genre elements are treated in a naturalistic way, the pose of the mother and child and the upright format once again recall earlier Italianate models.

Besides being a painter, Wtewael was a successful business man.  His affluence evidently allowed him to keep many of his paintings, since at the time of his death a large number remained in his estate.  It is possible that the present painting may have been among them as a picture of Charity is listed in the estate of the artist’s daughter Antonietta, who was married to Johan Pater (noch een Caritas) and also in that of their daughter Hillegonda Nellestyne-Pater (Een Charitas).  However, the descriptions are too vague to be able to make a secure identification and, as we have seen, Wtewael painted more than one version of the subject.