A Still Life of Flowers in a wicker Basket

This composition is one of several works in the 1620’s by Balthasar van der Ast that illustrate the artist’s transformation of the floral still life.  Brother-in-law and pupil of Ambrosius Bosschaert the Elder, Van der Ast used the techniques of the older painter to achieve a dramatically different effect.  Indeed, A Still Life of Flowers in a Wicker Basket was painted in Utrecht two years after Bosschaert’s death and is a beautiful example of the younger painter’s innovations, primary among them his approach to composition.  The formality of Bosschaert’s compositions, frontal in orientation and carefully arranged to best display the characteristics of each individual blossom, gives way in Van der Ast’s work to a loose, more freely flowing arrangement that captures the experience of flowers in nature.  Van der Ast’s combination of Bosschaert’s naturalism and Roelandt Savery’s exoticism has been called “the embodiment of Dutch and Flemish flower painting from the first half of the seventeenth century.”(I)

This painting, dated 1623, depicts a basket filled with freshly cut flowers sitting on a stone ledge.  Irises, roses, variegated tulips, and a single carnation define the gentle horizontal movement of the arrangement.  The eye is drawn from left to right across the composition, from the outermost petal of the striped carnation to the red variegated tulip blossom at the upper right and its red and yellow counterpart beginning to wilt beneath.  Van der Ast placed fresh pink and white roses in a triad at the center of the composition beneath a large white and red tulip and the bent head of a fritillary.  Two vigorous blue irises dominate the left-hand side of the arrangement while a third lies on the stone ledge waiting to take its place in this ephemeral grouping.  The composer of the flower basket has temporarily left the scene, and nature has quickly begun to take its course.  A caterpillar inches its way up the stem of the large yellow iris as a dragonfly lands on its uppermost petal.  A cricket begins to explore the lilting white petals of the blossom on the ledge at the right, while a spider and a fly begin their work on the white rose at the center of the arrangement.  These creatures, likely to scatter at the hint of human presence, lend spontaneous movement to an already lively composition. Blossoms and leaves reach out in every direction, their silhouettes creating a complex, organic pattern against the uniform background.

This composition is similar to Basket of Flowers of around 1622, a painting that hung with a pendant in the Hague collection of Prince Frederick Hendrick and Amalia van Solms (National Gallery of Art, Washington).  Both compositions are conceived from left to right, and the same striped carnation and variegated red tulip demarcate the outermost limits of each . Fleshy roses fill the center of both arrangements, but the ledge in the Washington painting is far more crowded.  Grapes, peaches, cherries, red currants, and an array of exotic shells, one still inhabited, litter the larger area around the basket, perhaps in order to connect it thematically with its pendant, Basket of Fruits.  This painting, by contrast, is a purely floral arrangement.

Both Still Life of Flowers in a wicker Basket and the Washington painting are fine examples of Van der Ast’s early works.  The flower arrangements fill the space of the picture plane and provide, through an internal coherence and uniform lighting, a sort of complete aesthetic experience.  The eye is drawn from one lively blossom to another with no desire to leave the self-contained space of the composition.  Van der Ast’s later still lives, such as Still Life of Flowers, Shells, and Insects on a Stone Ledge (formerly Pieter C.W.M. Dreesmann) of the mid-1630’s, can become infinitely more complicated.(ii)  In this work a large shell holds a sprawling arrangement of flowers half cast in shadow.  Large, carefully placed blossoms no longer define a roughly symmetrical composition, rendering the arrangement somehow precarious in its placement on the stone ledge, teeming with objects of competing visual interest—large, exotic shells and a veritable army of insects, including a dead wasp.

Like Bosschaert, Van der Ast worked from drawings made after actual blossoms and used the same studies for a range of paintings.  In keeping with workshop practice at the time, Van der Ast may well have inherited some of Bosschaert’s drawings and used them directly in his own work.  However, Van der Ast’s greater variation in the specific characteristics of a blossom prevents the kind of one to one matching possible with Bosschaert’s paintings.  The carnation and variegated red tulip in the Washington composition, for example, closely resemble those in this painting, but subtle differences in their silhouettes and the intensity of their color keep them from being exact copies.  Van der Ast, likewise, combined flowers from different times of year in the same composition, rendering his arrangements no more plausible than those of Bosschaert, but due to their more naturalistic treatment, certainly seeming so.(iii)

Balthasar van der Ast was born around 1593 in Middelburg. He was orphaned upon his father’s death in 1609, at which point he most likely lived with his older sister Maria and her husband, the still-life painter Ambrosius Bosschaert the Elder (1573-1621).  Van der Ast’s early technique and symmetrical compositions show the influence of Bosschaert and the younger artist seems to have accompanied his sister and brother-in-law when they moved from Middelburg to Bergen op Zoom in 1615 and then to Utrecht.  In 1619, Van der Ast joined the St. Luke’s Guild in Utrecht and may have taught Bosschaert’s three sons upon their father’s death in 1621.  In Utrecht he also seems to have discovered the works of Roelandt Savery, which had a softening effect on his painting technique and led him to consider atmospheric effects in greater measure.  He moved to Delft in1632 and joined the city’s St. Luke’s Guild that same year.  Paintings from his Delft period are, on the whole, more loosely painted and larger in scale.  Van der Ast died in December 1657 and was buried in the Oude Kerk in Delft.

i Arthur K. Wheelock, Jr., From Botany to Bouquets: Flowers in Northern Art (Washington D.C., 1999), p. 45.
ii See the entry and illustration of this painting in Still Life Painting from the Netherlands 1550-1720 (Amsterdam, 2000), p. 156-57.
iii It is interesting to note that this element of Van der Ast’s work is rarely mentioned whereas implausibility is among the first things mentioned in discussions of Bosschaert’s compositions. This difference points to the great shift in perception that accompanies Van der Ast’s more naturalistic style. 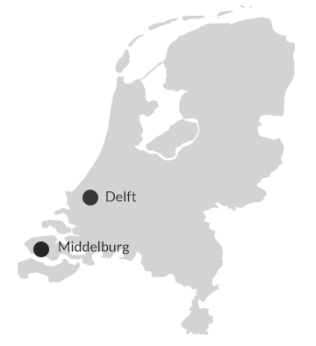