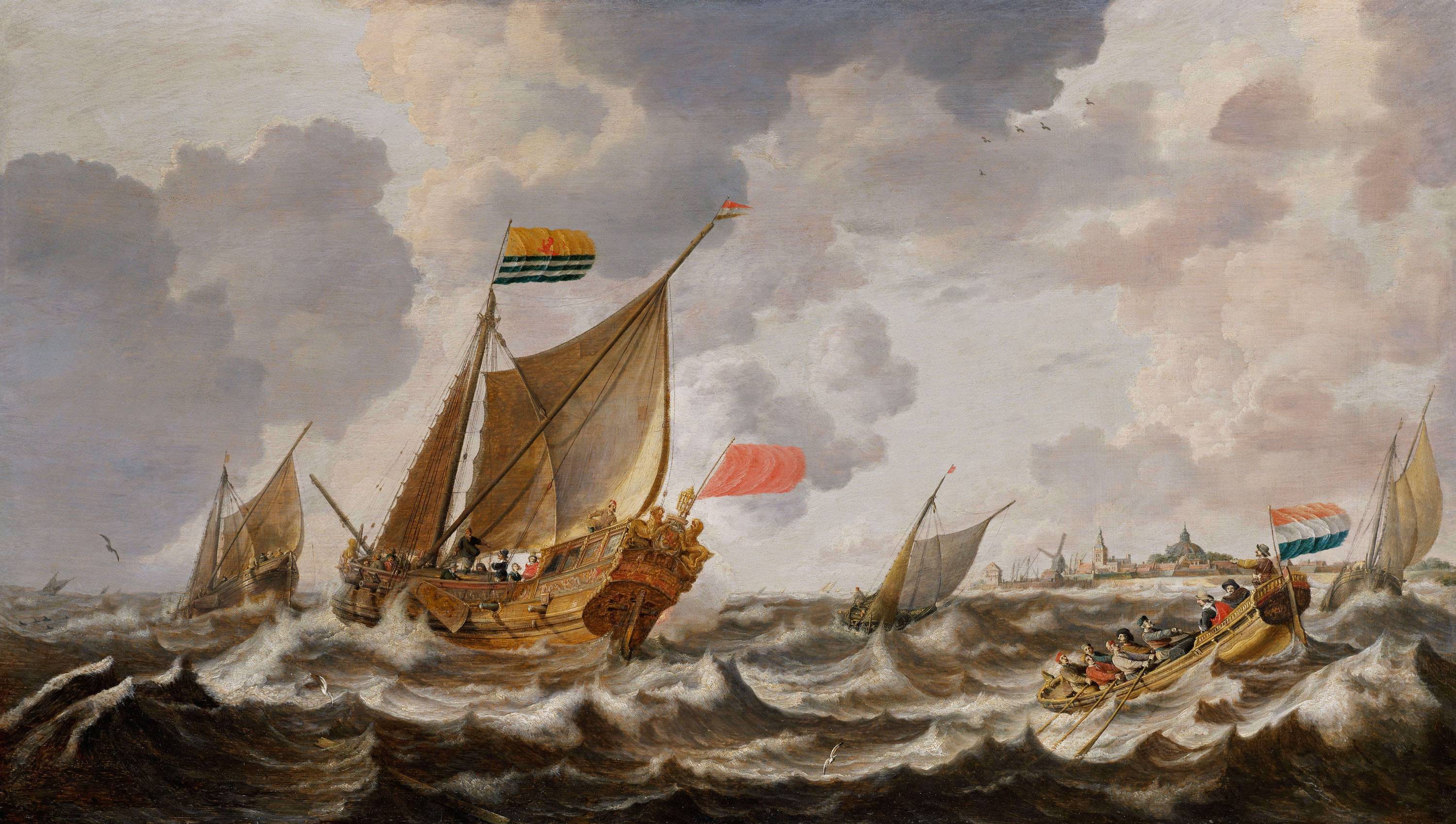 Shipping in choppy Seas off Willemstad

Mr. Carel Goldschmidt, Mount Kisco, New York, by 1965
And by descent to the previous owner
The Helena Goldsmith Trust, until 2015

Bonaventura Peeters the Elder was the most renowned member of a Flemish family of landscape and marine painters. Although he is best known for his dramatic scenes of shipwrecks and rocky, storm-battered coastlines, he developed a varied repertory whose themes included battle scenes, depictions of ships in harbours, estuaries and in the coastal waters off Holland and Flanders, and marine views of locations as far afield as the shores of the Mediterranean, South America and Russia. Some of his paintings display the mannerist tendencies of his Flemish predecessors, such as Andries van Eertvelt (1590-1653), who may have been his teacher, but for the most part he adopted a more naturalistic, tonal style that shows the influence of the Dutch painters Jan Porcellis (1583/84-1632), Jan van Goyen (1596-1656) and Salomon van Ruysdael (1600/03-1670).

Bonaventura Peeters was one of the few marine specialists active in the Southern Netherlands during the mid-seventeenth century. Unlike the Northern Netherlands, where the genre flourished during this period, there seems to have been little demand in Flanders for pictures of ships and the sea. This was no doubt due to the severe decline in marine activity in the local area resulting from the long, drawn-out war between the Spanish-held territories in the Southern Netherlands and the breakaway provinces in the North which dragged on until 1648. For much of this period the Dutch fleets successfully blockaded the River Scheldt, cutting off the port of Antwerp from the open sea and bringing shipping to a virtual standstill. Although Peeters seems always to have based himself in or near Antwerp, the subjects of his paintings, which often feature Dutch seaports and ships flying the Dutch flag, suggest that he made regular trips to the North and found an appreciative audience for his art there.

From early in his career, Peeters the Elder developed something of a speciality in the portrayal of seaports with shipping in the foreground. The present painting, which is a characteristic example of this type, depicts a variety of vessels in the turbulent waters of the Hollands Diep, off Willemstad. Under banks of billowing clouds, in gale-force winds, a Zeeland States yacht (i) makes her way through heavy seas. Her stern is lavishly decorated with a carved and gilded escutcheon featuring a red lion, symbol of the Dutch Republic: she is flying the Zeeland flag from her main mast, Dutch colours from the gaff and a red flag at the poop - a signal that she is about to get underway (ii) - and firing a salute from her starboard side. A barge (roeisloep) is approaching from astern, with a team of oarsmen and passengers on board: the man in a white hat, seated in the stern, is probably some kind of dignitary, who, judging by the helmsman’s gesture, is intending to board the yacht despite the huge swell. Three small cargo or fishing vessels are manoeuvring in the channel close by. The sea beyond is dotted with the sails of small sailing boats. Seagulls skim the white-caps and a school of dolphins surfaces in the middle distance. On the right, rising above the waves and lit by sunlight are the distinctive outlines of Willemstad.

The city of Willemstad lies in the Dutch province of North Brabant. It takes its name from William I of Orange (1533-84), who as early as 1583 ordered the construction of fortifications on the coast of north-west Brabant in what became Willemstad. It eventually formed part of a string of garrisons established by the States General at strategic locations along the coast in order to defend the Northern provinces from attacks from the sea. Clearly visible in Peeters’s painting are the star-shaped fortifications and the large domed, octagonal church which was built in 1607. The latter is regarded as the first purpose-built Reformed Church in the United Provinces. Also recognisable at the left-hand end of the defensive walls and situated at the mouth of the harbour is a small, square building, or redoubt, which appears in a print by Peeters (iii).

Peeters’s interest in representations of shipping before city harbours was probably inspired by the work of the Dutch marine painter Hendrick Vroom (1566-1640), who is credited with inventing the genre. Vroom made a series of marine paintings with the profile of a town as the principal subject, including views of Hoorn, Alkmaar, Amsterdam and Vlissingen (iv). His View of Hoorn, a monumental work commissioned by the Hoorn civic authorities in about 1622, must have been familiar to Peeters, who was himself commissioned by the Hoorn city authorities to paint a view of the city in 1634, the year in which he became a master in the Antwerp guild. The painting, which measures nearly a metre and a half in width and depicts the warships ‘Hercules’ and ‘Eenhorn’ on the roads before Hoorn, is now in the National Maritime Museum, in Greenwich (v). Peeters’s oeuvre includes a number of smaller examples of this type, including two other views of Willemstad (vi), taken from different angles, and a view of Brouwershaven, in Rotterdam (vii). It is not known today whether these smaller works were made for the open market, or whether they were commissioned by individuals to whom the subject would have had significance, such as members of admiralty boards, city officials, or families of naval personnel.

Baptised in the church of St. Walpurgis in Antwerp on 23 July 1614, Bonaventura Peeters the Elder belonged to a talented family of painters: he was the brother of the painters Gillis (1612-1653), Catharina (1615 after 1676) and Jan (1624-1677/80) and uncle of Bonaventura Peeters the Younger (1648-1702). The name of his teacher is not recorded. He became a master in the Antwerp Guild of St. Luke in 1634, the same year as his brother Gillis, with whom he shared a studio in Antwerp. In 1639, the two brothers received joint payment of 480 guilders for a large canvas depicting the Siege of Callo (Antwerp, Musée Royal des Beaux-Arts), which had been commissioned by the municipal authorities in Antwerp. Peeters never married and in his latter days, reportedly due to poor health, he moved from Antwerp to nearby Hoboken, where he lived with his sister Catharina, with whom he collaborated, and his younger brother and pupil Jan. He died there on 25 July 1652 at the early age of thirty-eight. P.M.