A Bouquet of Flowers in a gilt-mounted, blue and white porcelain Vase


Provenance
Anonymous sale, Christie’s, London, 17 December 1999, lot 9 (as Circle of Ambrosius Bosschaert the Elder)
With Richard Green, London, from whom acquired by a private collector
Anonymous sale (‘Property of a Private Collector’), Sotheby’s, New York, 23 January 2003, lot 39 (as van den Berghe) for $290,000, where acquired by the late father of the previous owner
Private Collection, Spain

A bouquet of flowers is displayed in a gilt-mounted, blue and white Wan-li porcelain vase, standing on a table.  The principal blooms comprise an iris, four striped tulips, pink and white roses and an anemone.  Tucked in among these striking specimens are a number of smaller flowers, including an aquilegia, a daffodil, a narcissus, a cyclamen and a couple of varieties of crocus. Careful observation reveals two butterflies, a caterpillar and a ladybird nestling among the flowers and foliage.  Another butterfly has come to rest on the tabletop to the left of the vase, beside a thorny rose stem: a rose leaf lies to the right.   The vibrant reds, yellows, pinks and white of the flowers emerge boldly from the uniformly dark background.

Many of the details of Christoffel van den Berghe's life remain obscure and works by his hand are remarkably rare.  Although his presence in Middelburg is documented between 1617 and 1628, neither the dates nor places of his birth and death are known, nor is the name of his teacher recorded.  A still life of flowers, dated 1617, in the Johnson Collection, in Philadelphia, reveals the work of a fully-formed artist, two years before his name appears in the register of the Middelburg Guild of St. Luke, thus raising the possibility that he may have trained elsewhere.  Whatever the case, there can be little doubt that he was familiar with the flower paintings of Ambrosius Bosschaert the Elder, dating from about 1608/9 to 1614, the year when Bosschaert departed from Middelburg.   Besides floral still lifes, van den Berghe painted small winter and summer landscapes with a strongly Flemish flavour.

After Holland, Zeeland was one of the richest provinces in the Dutch Republic and its capital, Middelburg, second only in importance to Amsterdam.  Its prosperity depended on trade and shipping for which it was ideally situated between Flanders in the South and Holland in the North, with easy access to important sea routes.  Due to its location, it also became a haven for the many Flemings who fled to the north, following the fall of Antwerp to the Spanish in 1585.  Among the immigrants who settled in Middelburg around this time was the young Ambrosius Bosschaert the Elder, who was to become one of the great pioneers of flower painting and founder of a dynasty of flower painters which included his three sons, Ambrosius the Younger, Johannes and Abraham and his brother-in-law Balthasar van der Ast.

The rise of flower painting in the opening decades of the seventeenth century went hand in hand with a burgeoning interest in botany and horticulture.  By the late sixteenth century, Middelburg was already renowned for its botanical gardens.  We know from various reports that its citizens laid out gardens stocked with exotic species newly imported from abroad and corresponded with each other about their horticultural interests.  Among the most important of the city's gardens was that belonging to Matthias Lobelius, a friend and colleague of the famous horticulturist Carolus Clusius, director of the botanical garden at Leiden.   That flower painting flourished at an early date in Middelburg is surely due in no small measure to the presence of so many plant enthusiasts in the city and it is likely that the earliest efforts of painters at rendering flowers were produced in response to their requests for a record of their precious specimens.  From around 1605, when he dated his earliest painting, Ambrosius Bosschaert the Elder was the city's leading exponent of this new genre of painting.  Although he left Middelburg in 1614, the type of floral still life that he produced there - namely, a symmetrical, clearly ordered form of bouquet arranged in a vase - established the parameters of flower painting in the city well into the middle of the century.

Christoffel van den Berghe, about whose background nothing is known, undoubtedly came into contact with Bosschaert's work during his time in Middelburg.   However, his surviving oeuvre, consisting of no more than a handful of still lifes, only two of which are signed and dated, and a dozen or so landscapes, is so small that it makes it very difficult to draw many conclusions concerning his development.   Of his two dated paintings, the floral bouquet, of 1617, in the John G. Johnson Collection, in the Philadelphia Museum of Art, which is regarded as his masterpiece, is the most relevant here in terms of a comparison.  Also painted on a copper panel, of slightly larger dimensions, the Philadelphia painting depicts a similarly compact arrangement of flowers in a glass vase, placed in a stone niche.  Just as here, the upper part of the bouquet is dominated by three striped tulips and an iris.  The colouring in both bouquets, with its emphasis on strong red, yellow and white, is likewise comparable, as is the bright, even lighting.  The Philadelphia painting, however, differs somewhat from the present work in its execution, being rather smoother and more refined.  This, as Fred Meijer has pointed out (i), argues in favour of a slightly earlier dating for the present painting, a view which is supported by a comparison of van den Berghe's still lifes with those of Ambrosius Bosschaert.  Whereas as the Philadelphia flower piece does not show a particularly close relationship with the work of Bosschaert, the influence of his floral bouquets dating from around 1605 to 1610 is clearly evident here.  In the first instance, the globular porcelain vase on a gilded foot recalls a type used by Bosschaert in a number of his early flower paintings, while the yellow and white tulip at the top right of the present painting appears to be a direct quotation from a Bosschaert bouquet of 1608 (ii).

Thus we may conclude that in the early part of his career in Middelburg, van den Berghe was exposed to the influence of Ambrosius Bosschaert the Elder, whose works he probably knew at first hand, but following the latter's departure from the city around 1614, he began to develop along different lines.  His only other dated painting, a still life of dead game birds, of 1624, in The J. Paul Getty Museum, Los Angeles (iii), is painted on canvas of much larger dimensions and is entirely different in character.  Perhaps, in the future, more paintings by this enigmatic artist will come to light and it will be possible to fill in some of the gaps in the jigsaw.

Very little was known about the author of this still life until 1956, when the art historian Laurens J. Bol was able to ascribe a group of pictures bearing the monogram 'CVB' to Christoffel van den Berghe (iv).   In 1619, he was a leader (beleeder) of the St. Luke's Guild in Middelburg and, in 1621, was appointed dean. Van den Berghe purchased a house in Middelburg in 1621 and was still living there in 1628.  In 1622 he received payment for a painting of the burning and rebuilding of the Koorkerk in Middelburg.  In 1626 he became engaged to Mayken Jans van Giffen but the marriage never took place.  Two years later, when he had still not fulfilled his promise to marry her, she confirmed that she would neither now nor ever wed the artist (v). 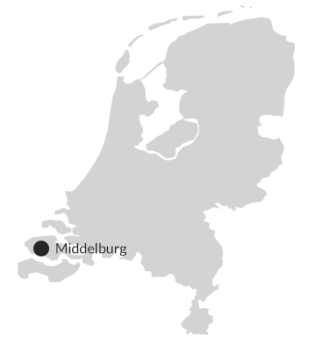