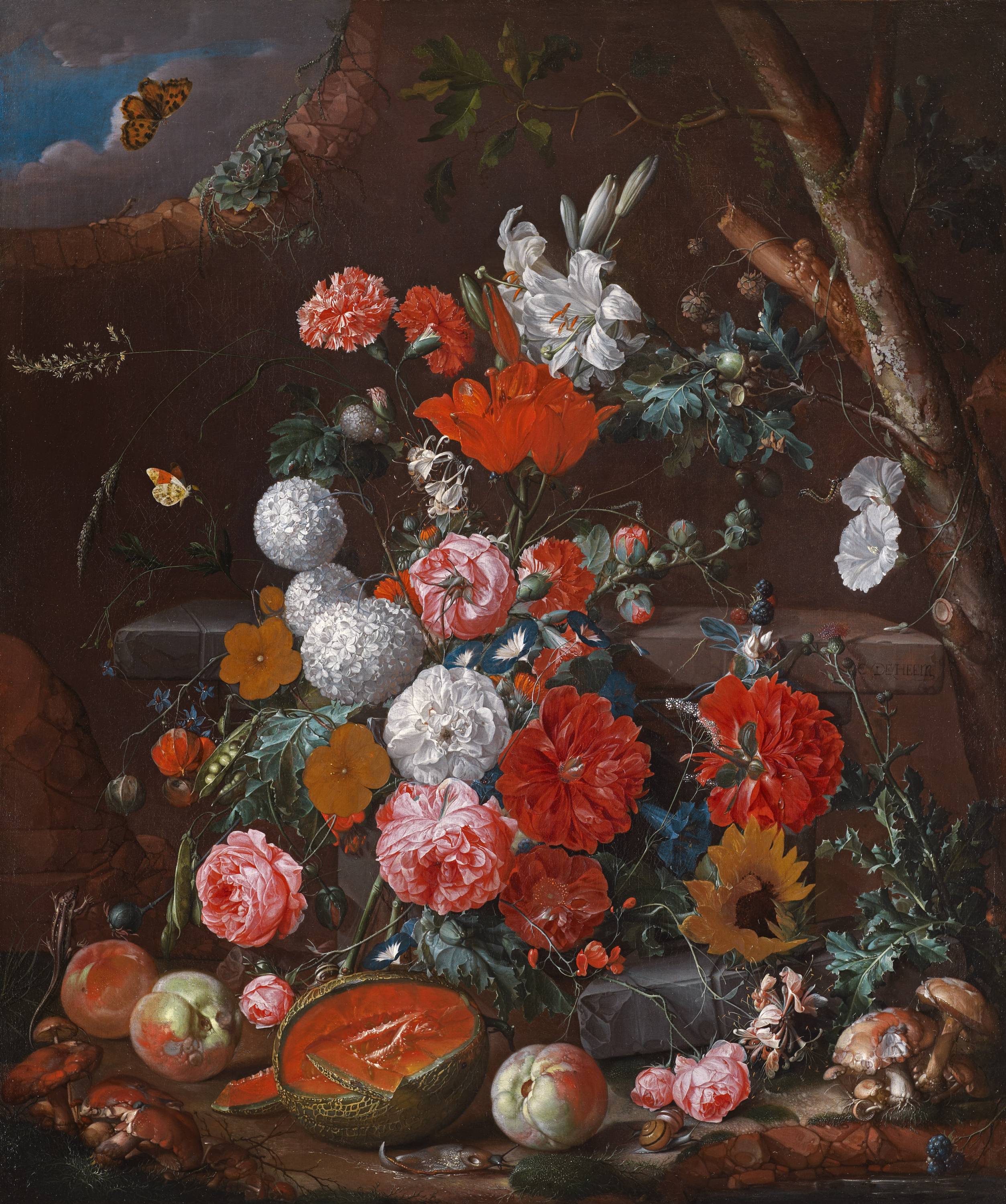 Strewn on the ground in front are some peaches and a melon, cut open to display its juicy interior.  The stone slab and seat, and the wall that appears in the background, are elements of a formal garden, but the abundance of wild flora and fauna in this shady corner suggests that nature is gaining the upper hand here.  An oak sapling has sprung up beside the seat, about which twine convolvulus and hops.  At its foot grow thistles and brambles.  Slugs and snails slide among the damp mosses and clumps of toadstools at the edge of a small pond, a lizard scuttles over a rock and two butterflies flutter above the fragrant blooms.  A glimpse of a blue, cloud-filled sky appears in the upper left-hand corner.  The bouquet of flowers and a single wing of a butterfly, caught in a brilliant ray of light, emerge in a blaze of colour from the dark background.

Cornelis de Heem was the son and pupil of Jan Davidsz. de Heem (1601-1683/84), one of the seventeenth century’s greatest still-life painters.  Like his father, he devoted himself exclusively to still-life painting.  Both in his choice of subject matter and in his style he followed closely in his father’s footsteps.  In this still life, Cornelis has drawn inspiration from the outdoor still lifes that Jan Davidsz. de Heem, and more particularly his protégé Abraham Mignon (1640-1679), produced in the late 1660s and early 1670s, when Mignon was working in Jan Davidsz.’s studio in Utrecht.  Although Jan Davidsz. de Heem only painted a few open-air still lifes, they became one of Mignon’s specialities.  Such compositions combine the more traditional flower piece with elements of a forest-floor still life.

The forest-floor still life is a subgenre of still-life painting, which owes its invention to the Dutch painter Otto Marseus van Schrieck (1620-1678), who travelled to Italy around the middle of the seventeenth century.  In Rome, he joined the Bentvueghels (Birds of a Feather), a society of Netherlandish artists, who gave him the nickname “Sniffer” (Snuffelaer) because, according to Arnold Houbraken, “he sniffed around everywhere for strange plants and herbs”.  Perhaps inspired by the example of contemporary Italian painters, van Schrieck began painting reptiles and insects in an outdoor setting.  After returning home in 1657 and settling in Amsterdam, Houbraken further informs us that van Schrieck acquired a piece of land outside the city where he kept animals and reptiles.  His fascination with the natural world is reflected in the strange, dark close-up views he produced of the forest undergrowth populated by wild plants and flowers, fungi, insects, amphibians and reptiles.  Van Schriek set an example for a number of other artists who elaborated upon the theme.  These included such painters as Melchior d’Hondecoeter (1636-95), Rachel Ruysch (1664-1750), Elias van den Broeck (1650-1708), Jan Davidsz. and Cornelis de Heem and Abraham Mignon.

Despite the influence of van Schriek, the mood is quite different in Cornelis de Heem’s still life.  The vegetation of the former is dark and mysterious, the creatures often threatening, but here the natural setting serves primarily as an outdoor stage on which is presented a sumptuous display of cultivated fruits and flowers. Cornelis’s almost graphic detail, as well as the bright palette and theatrical lighting, give his painting a decorative character that reflects the fashion of the late seventeenth-century.  There is a closely related still life in a private collection in Switzerland[i], in which the motifs of the stone slab and seat, oak sapling and forest-floor elements are repeated, but the arrangement of flower and fruit differs. The present painting may be dated to the mid-1680s[ii].

The notion of transience, inherent in all flower paintings, is here enhanced by the representation of the garden in the process of being reclaimed by nature.  We are thus invited to contemplate the ultimate vanity of man’s endeavours and the ephemerality of all earthly existence.

As the provenance indicates this painting came from Dyrham Park in Gloucestershire.  The picture appears in the 1839 inventory of the house[iii], when it was hanging in the “Great Roome above Stairs”, but it was in all probability acquired by William Blathwayt (?1649-1717) in the late seventeenth century.  Blathwayt’s interest in Dutch pictures was likely kindled at early age by his uncle Thomas Povey (fl. 1633-1685), a civil servant and politician, who maintained a splendidly furnished house in Lincoln’s Inn Fields, where the diarist Samuel Pepys admired his wine cellar and collection of Dutch pictures.  Through Povey’s connections the young Blathwayt received his first appointment as secretary to Sir William Temple in The Hague.  During a four-year stay in the Dutch city, he learnt to speak Dutch and proved himself to be a gifted administrator.  Over the next twenty years Blathwayt secured a number of lucrative offices, including Clerk of the Privy Council, Member of the Board of Trade, and from 1683 until 1704, Secretary of War.  His administrative abilities and knowledge of the Dutch language served him in good stead when in 1688 the Dutch King William III ascended the English throne. He subsequently served as Secretary of State and accompanied the King on his campaigns in the Low Countries.  Blathwayt’s success in public life was matched by his marriage in 1686 to Mary Wynter, a wealthy Gloucestershire heiress, through whom he would inherit the Dyrham estate.  The old Tudor house at Dyrham was however in a poor state of repair, a situation which gave Blathwayt the opportunity to realise his own vision and create a new house and garden that reflected his enthusiasm for all things Dutch.  The programme of rebuilding began in 1692 and continued until 1704.  There arose on the foundations of the old house an elegant baroque mansion, with magnificent formal gardens laid out in the Dutch style.  The interior, too, became a showcase for Blathwayt’s collection of predominantly Dutch paintings, a number of which came from Povey[iv], and furnishings in the Dutch taste, including gilt-leather wall-hangings and a magnificent collection of blue and white Delftware.

[ii]We are grateful to Fred Meijer of the RKD in The Hague for his help in dating this picture.

[iii] I am grateful to Dr. Rupert Goulding, the National Trust’s Curator for Gloucestershire and Bath, with responsibility for Dyrham Park, for supplying this information.

[iv]In a deed of sale of 1693 Blathwayt agreed to buy from his uncle Thomas Povey for “£500 of good English money”  a quantity of books and 112 pictures.  These include the famous View down a Corridor by the Dutch painter Samuel van Hoogstraten, whom Povey had patronised when the latter was in London between 1662-67, which is preserved today at Dyrham.