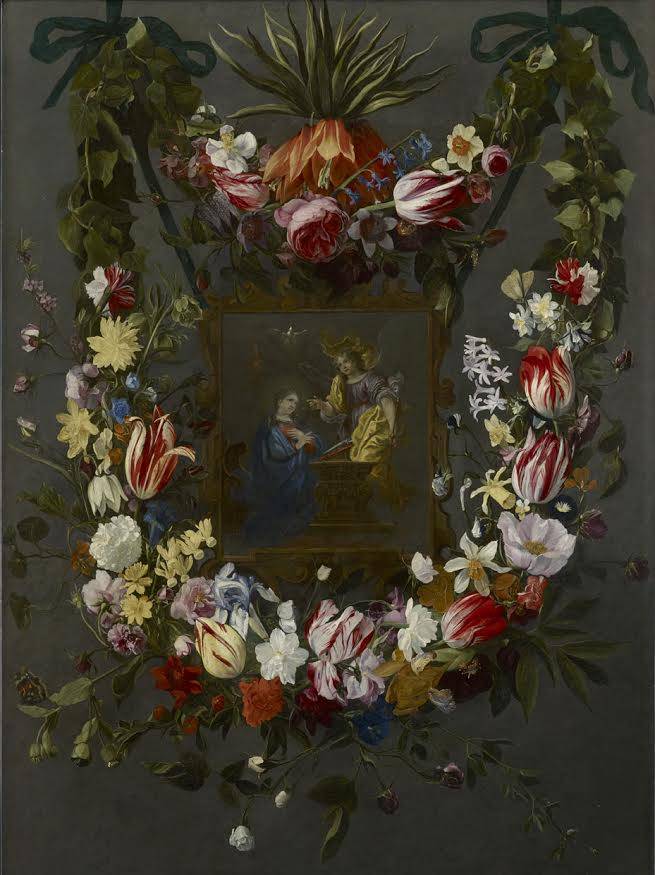 Festoons of Flowers surrounding an Image of the Annunciation

We are grateful to Drs. Fred G. Meijer, formerly of the RKD – Netherlands Institute for Art History, in The Hague – for confirming that the flowers in this still life are by Daniel Seghers.  He dates the work to circa 1640.

A framed painting of the Annunciation appears at the centre of the composition, seemingly suspended from blue ribbons, tied with bows at the top.  Also apparently hanging from the ribbons are two festoons composed of stems of ivy interwoven with vibrantly coloured flowers and foliage.  Such is the artist’s attention to botanical accuracy that the many different species of flowers depicted can easily be recognised: pink and white roses, striped tulips, hyacinths, narcissi, irises, carnations, nasturtiums, snake’s-head fritillaries and convolvulus can all be seen, together with aquilegias, anemones and hellebores.  The whole is surmounted by the magisterial bloom of a crown imperial fritillary.  Under bright lighting, the bright colours of the flowers emerge boldly from the neutral grey background.  Seghers’s crisp, yet elegant style is immediately recognisable, but the painter of the figures has not been identified: the style, however, suggests a painter working in the circle of Cornelis Schut the Elder (1597-1655).

The Jesuit brother Daniel Seghers was one of the most remarkable flower painters of the seventeenth century.  Already famous in his lifetime, his paintings were highly sought after in elite circles.  His works were rarely offered for sale, but were instead presented by the Jesuits as diplomatic gifts to the rulers of Europe, or used to decorate their churches and monastic houses.  In exchange for his paintings, the artist was sometimes rewarded with lavish presents: for example, in 1645, he was given a gold palette with six gold brushes and a gold mahlstick by the Dutch Stadholder Frederik Hendrik.  His name was praised by his contemporaries in prose and verse, and his fame drew such illustrious visitors to his studio as the Cardinal Infante Ferdinand, the Archduke Leopold Wilhelm and the future Charles II of England.

The larger part of Seghers’s oeuvre is devoted to garlands and festoons of flowers surrounding a central image executed by a specialist figure painter.  In the majority of cases the central image depicts a religious subject – representations of the Madonna and Child, saints and the Passion of Christ being among the most popular – but portraits, and mythological scenes are also known.  Among the many painters who collaborated with Seghers were Peter Paul Rubens (1577-1640), Thomas Willeboirts Bosschaert (1614-54), Hendrick van Balen (1574/5-1632), Erasmus Quellinus II (1607-78), Simon de Vos (1603-1676), Abraham van Diepenbeeck (1596-1675) and Cornelis Schut I.

Although Seghers cannot claim to have been the originator of the garland still life, he played an important role in developing and popularising the genre.  He adopted the type from his master Jan Brueghel the Elder (1568–1625), who introduced the concept of a garland of flowers surrounding a central religious image in collaboration with Hendrick van Balen, Rubens, and others, in the first decades of the seventeenth century.  Seghers’s own collaborative endeavours began early in his career: immediately after taking his final vows in 1625, he spent two years in Rome, where he employed his talents working for ecclesiastical patrons, painting wreaths of flower around central religious images by such leading painters as Nicolas Poussin (c. 1594-1665), and Domenichino (1581-1641).  His looped festoons of flowers encircling a central image, of the type seen here, are also derived from prototypes by Jan Brueghel the Elder.  Later, he went on to develop a distinctive type of backdrop for his floral still lifes that took the form of a dark, trompe l’oeil stonework niche or sculpted cartouche.

In seventeenth-century Antwerp, garland paintings by Daniel Seghers and others were appreciated not only for their decorative effect, but also for their religious significance.  The illusionistic character of these paintings is key to understanding their meaning, for the floral elements are seen to encircle not simply a traditional religious image, but a trompe l’oeil image of a painting, or sculpture.  Here the central image is presented as a framed painting suspended on illusionistic ribbons – a painting within the painting – and the illusion is enhanced by the extremely naturalistic treatment of the festoon, with small sprays of flowers overlapping the edges of the richly carved frame.  The question of the status of images was an issue of great importance in the Counter-Reformation culture of seventeenth-century Antwerp.  The iconoclastic riots of 1566, which had seen the widespread destruction of religious paintings, sculptures and stained glass in churches and religious houses throughout The Netherlands, had had profound consequences for painting in the Southern Netherlands.  With the Spanish reconquest of Antwerp in 1585 and revival of Catholic authority, the Church  sought to harness the power of art in the service of the faith, and the Jesuits more than any other order was quick to realise the potential of visual imagery as an aid to devotion.  Thus, it becomes clear that the garlands of flowers painted around religious images were conceived to reaffirm the validity of images as objects of veneration.  A parallel may be found in the contemporary practice of draping real garlands over painted or sculpted images on feast and holy days.

The flowers depicted in the flower garlands of Seghers and others often include species with symbolic significance, linking them to the thematic content of the central image.  For example, holly, thistles and other spiny plants may frequently be found in garlands surrounding scenes of the Passion of Christ, while flowers symbolic of the Virgin invariably appear in garlands framing scenes of her life.  Here, both the roses and the irises are flowers associated with the Virgin Mary (i).  It must also be remembered that species like hyacinths and striped tulips were not common garden plants in the early seventeenth century, on the contrary, they were regarded as rare and exotic commodities.  The precious quality of the flowers in painted garlands thus serves as an aid to engage the viewer’s attention on the devotional image, stirring the emotions and enhancing the spiritual experience.  Here, Seghers’s festoon of flowers creates a vibrant and joyous surround for the miraculous event transpiring in the central image.

A very similarly conceived painting by Seghers depicting festoons of flowers encircling a representation of the Annunciation by Cornelis Schut the Elder may be found in the Heinz Family collection (ii).  When Seghers died he left a “Catalogue of Flower Pieces which I have painted with my own hand and for whom” (Cataloge van de Bloem-stukken, die ik selfs met mijn hand heb geschildert en voor wie) (iii).  Although probably incomplete, 239 paintings are listed, of which three mention an image of the Annunciation (iv).  Although the descriptions are too vague to make a positive identification, perhaps significantly number 39 was produced for a Spanish patron, Francisco de Moncada, Marquis of Aytona and Duke of Ossona (1586-1635): the Duke arrived in Flanders in 1629 and became commander-in-chief of the Spanish military forces there.

Many of Seghers’s signed paintings are inscribed with the words ‘Soc[ieta]tis Jesu’, signifying his allegiance to the Jesuit Order.  Unusually in this case, the original oak backboard to the painting has survived and is pierced with the Jesuits’ insignia IHS (Iesus Hominum Salvator) together with the cross and the three nails of the passion (v).

We are unusually well informed about the life and work of Daniel Seghers because the artist himself produced an autobiographical statement in January 1615 at the time of his admission to the Jesuit order.  According to this document, Seghers was born in Antwerp on 3 December 1590, the son of the silk merchant Pieter Seghers and Marguerite van Gheel.  Following the elder Seghers’s death in about 1601, his widow converted to Calvinism and moved with her son to the Northern Netherlands, probably to Utrecht.  The name of Daniel’s first teacher is not known, but he apparently began his study of painting about 1605.  The family returned to Antwerp in 1609 or 1610, where Daniel completed his training under Jan Brueghel the Elder, before becoming a member of the Antwerp Guild of St. Luke in 1611.  Daniel re-converted to Catholicism and, in 1614, entered the Jesuit Order in Mechelen.  He continued to paint after joining the Jesuits.  From 1617 to 1621 he lived in Antwerp, and then from 1621 to 1625 he was resident in Brussels.  After taking his final vows in July 1625, he spent two years in Rome, where he occupied himself painting flower garlands for ecclesiastical patrons.  In 1627, he returned to the Jesuit house in Antwerp, where he lived for the rest of his life.  Towards the end of his life he made a record of his work in the “Catalogue of Flower Pieces which I have painted with my own hand, and for whom” in which 239 paintings were listed.  However, in most cases the descriptions are too generic to enable many to be identified with any certainty.  After a prolonged illness, Seghers died in Antwerp on 2 November 1661.  His only documented pupil was the flower painter Jan Philips van Thielen.

i Roses are traditionally associated with the Virgin, and have also been interpreted as a symbol of Christian love.  The iris is commonly considered one of the flowers of the Virgin Mary and sometimes takes the place of the lily in scenes of the Annunciation.
ii Daniel Seghers & Cornelis Schut I, Garland of Flowers surrounding The Annunciation, c. 1630, oil on panel, The Heinz Family collection.
iii “Cataloge van de Bloemstukken, die ik selfs met mijn hand heb geschildert en voor wie”.  Published by W. Couvreur, ‘Daniel Seghers’ inventaris van door hem geschilderde bloemstukken’, in Gentse Bijdragen tot de Kunstgeschiedenis den de Oudheidkunde, xx, 1967, pp. 87-158.
iv Nos. 39, 65 & 108.
v A dendrochronological report carried out by Ian Tyers in February 2017 revealed that the backboard is composed of 4 vertical oak boards.  Analysis of the tree-ring sequences from these boards provided a felling date for 3 of the timbers after c. 1615.  Two of the boards were derived from a single tree sourced from the Netherlands, the third dated board was from the eastern Baltic.