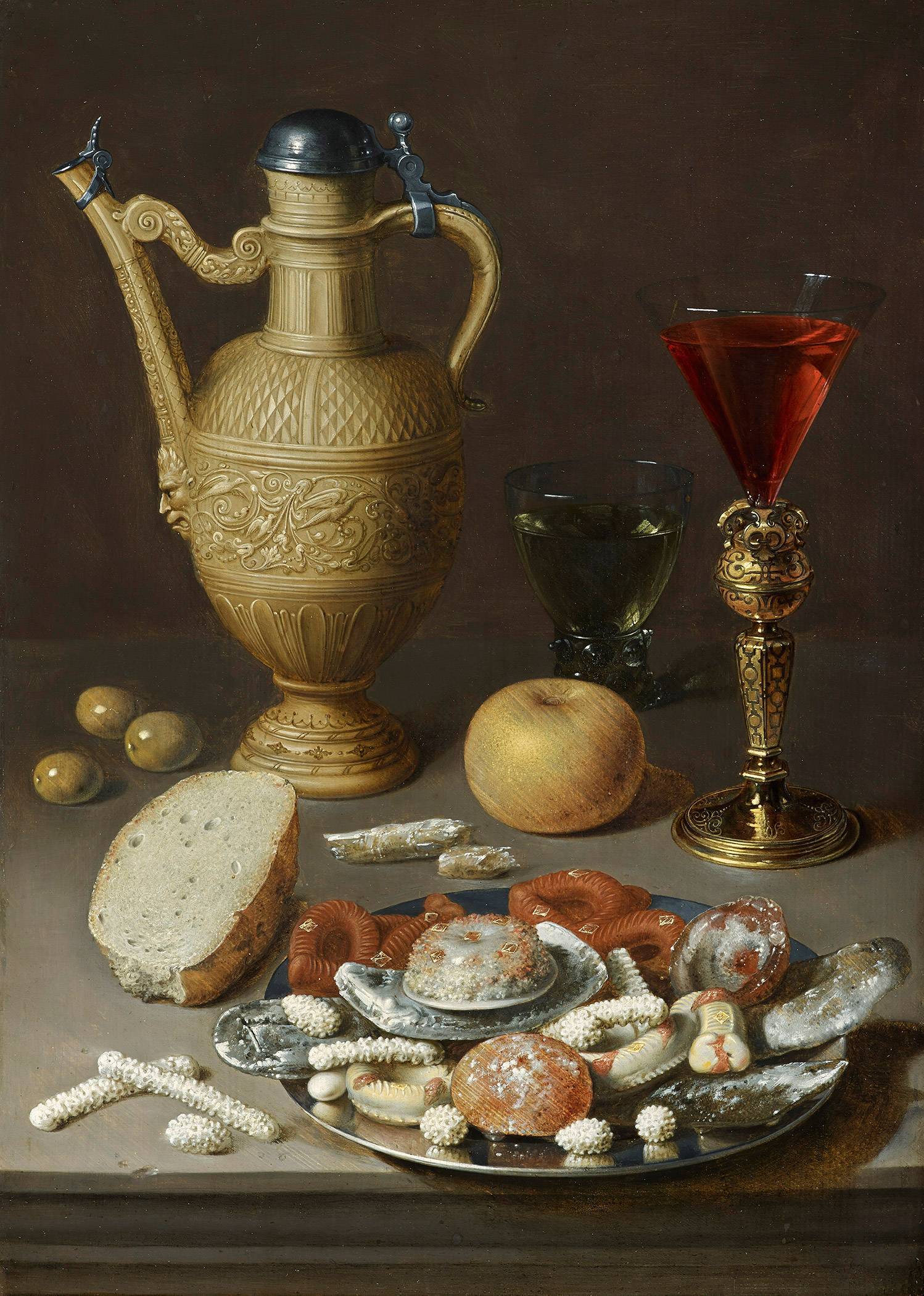 We are grateful to Mr. Ulrich Becker from the Universal Museum Joanneum for pointing out that the ewer in our painting is a Rhenish ewer from Siegburg, and is similar to one that appears in a painting by Pieter Claesz. in the Rheinisches Landesmuseum, in Bonn.

A still life on a hard-stone table: an ornamented ewer of Rhenish stoneware, with pewter lids on the spout and neck, a pewter dish of a variety of sweets and cookies, a rummer of white wine, a cup holder with a glass of red wine, three olives, half a bread roll, and an orange.

David Rijckaert II was registered as a master in the Antwerp painters’ guild in the administrative year 1607/1608.  He worked in Antwerp all his life.  Over the years, the guild registered several of his pupils: Carel Ruwaert (1609/1610), Jan Speeck (1611) and Franciscus de Fonteyn (1628/1629).  No work by any of them is known and none of them appears to have qualified as an individual master.  It is generally assumed that David also trained his son, David Rijckaert III, and his future son-in-law, Gonzales Coques.  Together with his brother, Marten, he became a member of the Antwerp Chamber of Rhetoricians, De Violieren, in 1619.  He is first mentioned by Cornelis de Bie (1661/1662), but only in the context of his son, David Rijckaert III.  It remains unclear whether de Bie was perhaps assuming that the son also painted still lifes, when he mentioned ‘stilstaend goet’ (still-standing objects) in his ‘epitaph’ of the artist and was thereby associating the father’s work with the son. (2) “See how he adapts his brush to the nature of all kinds of crop, and to kitchen ware and thus shows their still secret of the way of life”, he wrote (p. 310), and “of the noble mind of Rijckaert, who has painted it all, which in the still-standing work makes me meditate and think, yes to figures of which each seems to live”(p. 567).(3)  On the other hand, David Rijckaert III regularly included still-life elements in his peasant interiors, which may be what de Bie was referring to.  Strangely, neither in later literature, nor in contemporary documents does David Rijckaert II features prominently in any way. Bernadette Van Haute, in her monograph on David Rijckaert III from 1999 referred to the mention of two works by David Rijckaert ‘the Elder’ in 1657, being a Basket with grapes and birds and Peasants playing bowls after Adriaen Brouwer.  She further quotes van den Branden, who had found references to genre paintings by ‘den Ouden Ryckaert’.  Van Haute concluded that ‘Judging by what history has preserved as evidence, David II Ryckaert was not held in high esteem as an artist.  He certainly could not make a living from the sale of his own paintings. […]  At the time of his death, he possessed not a single property, and after he was buried on 3 October 1642, his small heritage was confiscated’.(4 ) This may not be entirely in keeping with the mention in a deed concerning the inheritance of David Rijckaert II from 1645, in which it is stated that the painter had bought paintings in the sale after Rubens’ death for which his son, David Rijckaert III would pay the remaining costs in order to keep them. (5)  Also, David Rijckaert II’s absence from contemporary sources is not as exceptional as it may seem.  The same situation applies to Clara Peeters, whose biography is still a void, while her still lifes are not found in contemporary Antwerp inventories, and the much same is true for the work of Osias Beert.

While, as the sources have shown, David Rijckaert II was the author of at least one still-life painting, he only properly emerged as a still-life painter in 1995, when a large, fully signed and dated canvas from 1616 turned up on the art market.(6)  This painting provided a good impression of the artist’s skills and preferences.  He was obviously eager to paint shiny and elaborate wine glasses and highly polished, opulent silver-gilt vessels, and other costly materials and objects.  His rendering of glasses and silver-gilt objects is somewhat reminiscent of the work of Osias Beert the Elder and  upon close comparison it turned out that some very similar, or even the same objects appeared in paintings previously attributed to Beert.  In fact, from the oeuvre of Beert, a distinct group of still lifes could be isolated – several of which were counted among the artist’s best works – that connects well with Rijckaert’s 1616 painting.  Among them are a painting in the Royal Museums in Brussels (7) and one formerly in the Spiridon collection in Rome, which, unfortunately, is only known from a poor reproduction, as well as a painting in the Rijksmuseum Twenthe, Enschede.(8)  The latter still life is featured in a cabinet picture by Frans Francken II from 1617 in the British Royal collection, in which it is furnished with the initials DR, which confirms Rijckaert’s authorship and dates it to or before 1617.(9)  Particularly interesting in connection with the still life discussed here is a painting by Rijckaert in the Museum for Fine Arts in Ghent, which was previously attributed to Jacob van Es (10); it features virtually the same elegantly decorated stoneware jug in combination with the silver-gilt cup-and-cover with a soldier on top, prominently present in the signed and dated still life from 1616.  Another feature found in several of the still lifes now recognised as Rijckaert’s is a porcelain or pewter dish of sweets – sugared cookies and nuts – also present in the painting discussed here.  Such dishes are also found in still lifes by Beert, which allows a proper comparison between the two artists.  Rijckaert’s rendering is generally sharper and more defined, with brilliant highlights in a stronger white, resulting in a more convincing illusion of three dimensions. As remarked above, already from the painting from 1616 it became clear that Rijckaert had a great interest in shiny silver-gilt vessels, a feature that is absent in Beert’s painting.  When Beert represented a costly metal vessel, it was usually a silver one and its shine would be mild compared to the lustre on the vessels in Rijckaert’s still lifes.  David Rijckaert II painted glasses in a similar manner as Beert did, with an emphasis on the reflections, rather than on the shape alone, but there are obvious differences as well.  Rijckaert’s reflections, again, are bolder and stronger than Beert’s and he looks for more nuance in the reflections in the wine.  While Beert would render the rim of a glass as a(n almost) continuous line in grey, with highlights at the front and back, Rijckaert placed stronger, whiter highlights at the front and back, and outlined the rim with a dark line.  Beert rather emphatically shows the reflections of windows in his wine glasses, Rijckaert appears to have been less occupied with such reflections.

To some degree, there is also a relationship between Rijckaert’s oeuvre and that of Clara Peeters.  Peeters certainly shared Rijckaert’s fascination for fine detail and for silver-gilt vessels, but her rendering of them was also somewhat less sparkling than Rijckaert’s. Interestingly, one of Peeters’ magnificent still lifes in the Prado museum in Madrid, painted c.1611, features a Rhenish stoneware ewer similar to the one in the present painting (11).  Such ewers were produced in the late sixteenth century in Siegburg in the Rhineland, by the workshop of Christian Knütgen.  They were exported to all over (northern) Europe and several examples have been preserved (12).

The presently recognised still-life oeuvre of David Rijckaert II, counting about ten to fifteen still lifes of high quality, thus, seems to contradict van Haute’s conclusion that he was not a successful artist.  There must have been a certain healthy competition between him and contemporaries such as Beert and Peeters.  He even appears to have collaborated with Peter Paul Rubens.  In an enigmatic painting in the Akademie der bildenden Künste in Vienna, the multitude of silver-gilt vessels and elaborate wine glasses can now easily be recognized as David Rijckaert’s (13).  That painting is generally dated to c.1610.  It would seem that the group that now has been recognised as the work of David Rijckaert II, from a stylistic point of view, was painted mainly in the 1610s and 1620s, and it may well be that the artist was less productive and successful as an individual artist later in life, and had to revert to making a living by copying the work of others, such as the copy after Brouwer mentioned in 1657.  In his early career, however, he seems to have been painting these exquisite still lifes for an eager market. The present painting can undoubtedly be counted among the best works he produced.

For an illustrated version of this article please contact the gallery.

1 B. Van Haute, David III Ryckaert A Seventeenth-Century Flemish Painter of Peasant Scenes, 1999, p. 7-8 and note 20, following Van den Branden, explains that David II’s parents were married in the Protestant church in 1585, but remarried in the Catholic church on 14 August 1589. David II was baptized a Catholic five days earlier, probably in connection with this second marriage of his parents. Thus he was the eldest son of the couple, and not Marten Rijckaert, who was baptised in 1587.

6 D. Rijckaert II, signed and dated 1616, oil on canvas, 103.5 x 136 cm. Most recently auctioned at Christie’s Paris, 16 October 2013, lot 82, colour ill. The painting apparently escaped the attention of Bernadette van Haute when she wrote on David Rijckaert II in 1999 (see note 1 and 4). Earlier, a still life signed ‘D. RŸKE..’ was published in Duits Quarterly, winter 1965, p. 16, as by David Rijckaert I. Most recently, this painting was auctioned at Dorotheum, Vienna, 20 March 1995, lot 74, colour ill., as by David Rijckaert III. It appears to be a copy after a still life in the manner of Frans Snijders illustrated in E. Greindl, Les peintres flamands de la nature morte au XVIe sciècle, 1983, p. 209, fig. 63, incorrectly as by J. van Es. It cannot be properly connected with the work of David Rijckaert II.

9 Francken also placed initials on other paintings in his image, like IDM on a work by Joos de Momper. I published this find in the Magazine Rijksmuseum Twenthe, no. 1 2009, pp. 26-28: ‘Herkend: Een stilleven van David Rijckaert II’. I intend to publish a more extensive article on the oeuvre of David Rijckaert II in due course.