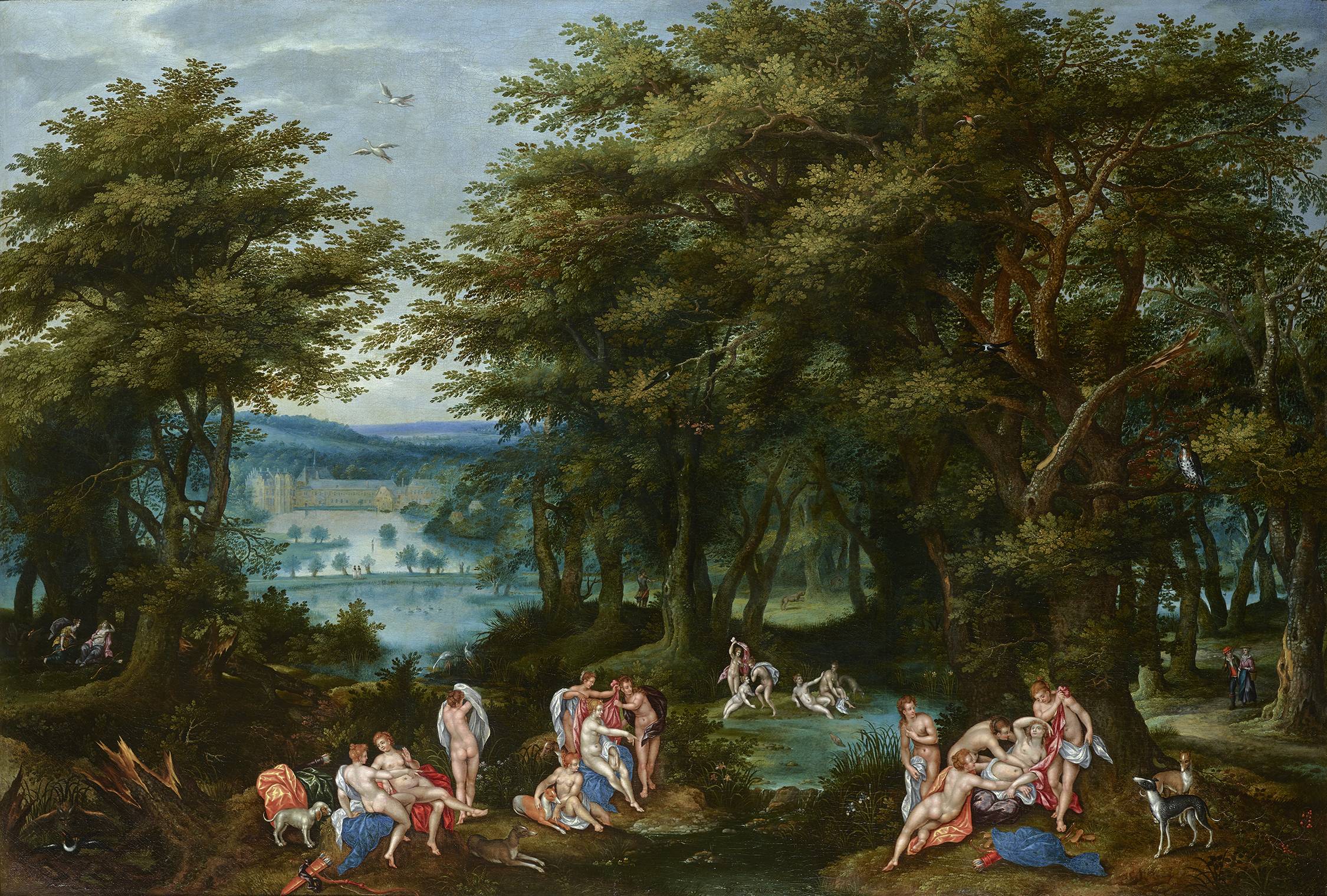 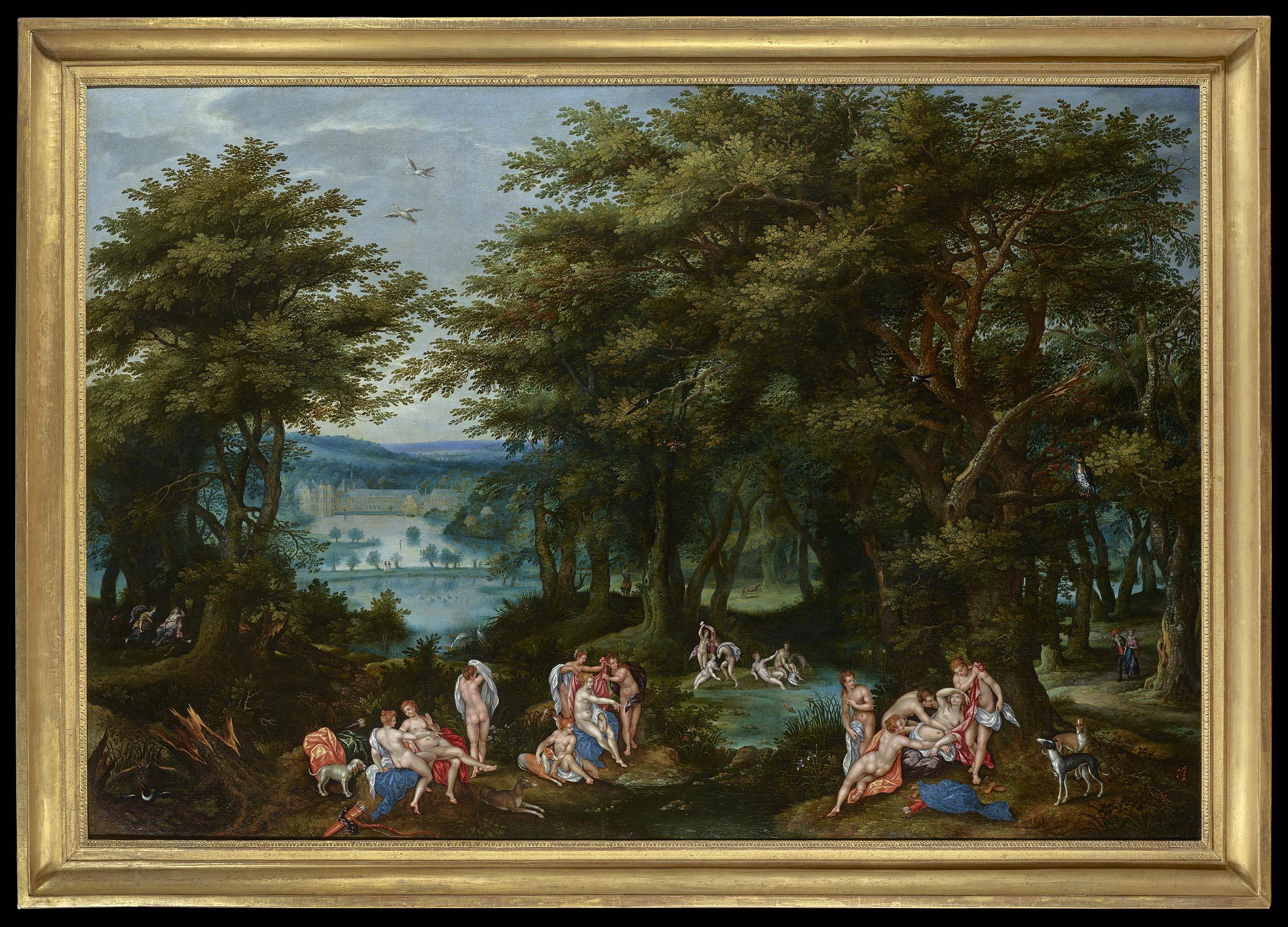 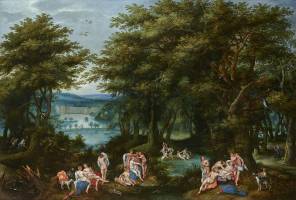 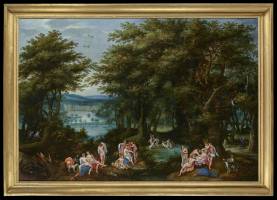 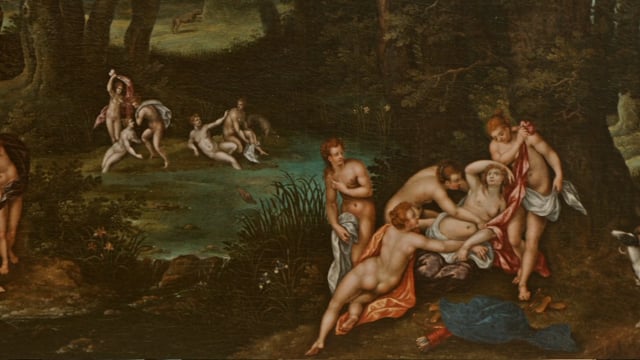 A Forest Landscape with Diana discovering Callisto's Pregnancy, and a View of the Abbey of Groenendael.

Private Collection, South of France, since at least the beginning of the 20th century, until 2019

The story of Diana and Callisto is told by Ovid in his Metamorphoses (II:401-567).  Beautiful Callisto was the favourite companion of the hunting goddess Diana.  Like her mistress, she prized chastity and was dedicated to the hunt.  One day Jupiter chanced upon her resting by herself in the woods and was smitten.  Disguising himself as Diana, he came to her and seduced her, leaving her pregnant.  Sometime later, after an exhausting hunt, Diana and her nymphs stopped to bathe in a woodland spring.  Callisto was reluctant to undress, but the nymphs lifted up her clothes revealing her pregnant belly.  As a consequence, Diana banished her from her company, and furious Juno, Jupiter’s wife, punished her by changing her into a bear and setting dogs on her.  Jupiter eventually intervened, transforming Callisto and her newborn child into a constellation.

Despite a successful career as court painter to the Archdukes Albert and Isabella in Brussels, surprisingly little is known about Denijs van Alsloot.  The son of a tapestry worker of the same name, he was probably born in Brussels around 1568.  He is mentioned for the first time as a master in the Brussels guild of painters in 1599, when he began taking on apprentices.  Around the same time, he entered the service of the archducal couple.  In his early career, van Alsloot probably worked in the same industry as his father, producing designs and cartoons for tapestry weavers, but his activities as a painter seem only to begin around 1606.  Thereafter, dated examples of his work are known until 1621. The majority of van Alsloot’s works are cabinet-sized paintings, executed on panel, but he also produced a small number of large-format (dobbeldoeken) canvases, like the painting under discussion.  He frequently signed his work with his name followed by an abbreviation of his official title as court painter – Serenissorum Archiducum Pictor.  Probably owing to his short career, his painted oeuvre is relatively small.

Van Alsloot specialised in forest landscapes, both summer and winter views.  Some are purely fanciful, while others are representations of identifiable places, including views of the Priory of Groenendaeland, and the royal estates at Mariemont and Tervuren, in the Forêt de Soignes, near Brussels.  He regularly turned to specialist figure painters to contribute the staffage in his paintings, among them Sebastiaen Vrancx (1573-1647), Otto van Veen (1556-1629), and the Brussels history painter Hendrik de Clerck (c. 1560-1630), who was his principal collaborator from about 1606 to 1614, providing biblical or mythological scenes in his landscapes.  In addition to landscapes, van Alsloot was commissioned by his royal patrons to execute a series of paintings commemorating the Ommegang procession held in Brussels on 31 May 1615.  Besides the patronage of the archducal couple, van Alsloot’s position at court gave him access to an exclusive circle of courtiers, government officials and advisors, from which he probably drew the majority of his clients.  Likewise his connections at court would have brought him into contact with visiting foreign princes and diplomats.  The fact that two of his paintings are listed in the 1632 inventory of the pictures belonging to the Stadholder Frederik Hendrik, Prince of Orange, and his wife Amalia van Solms, while two others were in the famous collection of the Marqués de Leganes (i), an ambassador of the Spanish court in Brussels, suggests that he enjoyed something of an international reputation.

This monumental canvas, which has recently emerged from an old French collection, is a fine example of van Alsloot’s art, his majestic forest interior providing the ideal setting for the mythological tale of the huntress Diana and her fair companion Callisto.  Here the elegant and somewhat mannered figures are by an unknown artist from the studio of Hendrik de Clerck.  The artist has chosen to depict the moment of revelation when Diana discovers that Callisto is pregnant.  In a secluded woodland clearing, inhabited by many birds, Diana and her nymphs have stopped to bathe, following the exertions of the hunt. The semi-naked Diana – identifiable by the crescent moon on her forehead – is seated at the centre of the composition, surrounded by her nymphs and hunting dogs, pointing accusingly at the unfortunate Callisto, who shrinks from her gaze in shame.  Two nymphs, seated on the left, register their surprise, having likewise spotted the shocking truth. The milky flesh tones of the goddess and her female band, and their vividly coloured clothing, stand out against the rich green tapestry of the forest.  The glade is surrounded on all sides by majestic trees, whose branches rise to the top of the picture.  On the right, a meandering path penetrates deeply into the woods along which approaches a couple of rustic lovers unaware of what lies round the corner. Further tunnel-like vistas lead the eye along winding tracks into the shady recesses of the forest.  On the left, a view opens up between the trees, offering a distant prospect of the ancient Priory of Groenendael.

Judging from the grandiose scale of this painting it must have been a specific commission, most probably for a member of the higher nobility.  The subject also suggests an aristocratic patron.  The theme of Diana and her hunting exploits was popular in courtly circles, since hunting remained the preserve of the princely elite, and a fiercely guarded privilege.  The Archdukes themselves participated enthusiastically in the pursuit of game: Isabella is known to have been especially fond of hunting.  Under their rule, a law was enacted in the Southern Netherlands stipulating that only the ruling lords were allowed to keep hunting dogs (ii).  A significant number of Alsloot’s paintings is devoted to hunting themes, whether featuring characters from mythology, or contemporary scenes with hunters pursing their prey on horseback, or on foot.  Many of these contain views of the castle of Tervuren, a royal hunting lodge located in the heart of the Forêt de Soignes, or the ancient Priory of Groenendael, which in the time of the Archdukes also served as a hunting lodge for the court.

The subject of Diana discovering the pregnancy of Callisto appears in a number of van Alsloot’s forest landscapes.  The earliest of these is the painting in the Musée du Louvre, in Paris (iii), which dates from around 1609-10, and shows a very different arrangement of figures.  The present painting can be most closely compared with the somewhat smaller version in the Staatliche Kunsthalle, in Karlsruhe (iv), dating from around 1610-11.  The main figure groups in that painting, which are by the hand of Hendrik de Clerck, are echoed in ours, but there are many variations in the forest setting and in the subsidiary figures.  Some of the figure groups are also repeated in other versions (v).

The forest interiors of Denijs van Alsloot belong to a long tradition in Flemish painting, the roots of which may be found in the mid-sixteenth-century landscape drawings, paintings and prints of Peter Bruegel the Elder (c. 1525-1569).  The genre was further developed in the later sixteenth century by such Flemish-born artists as Hans Bol (1534-1593), Gillis van Coninxloo (1544-1607), Jacob Savery (c. 1576/78-1639), Lucas van Valckenborch (1535-1597), David Vinckboons (1576-c. 1632) and others, working in various artistic centres.  A key figure in this development, and one who was without doubt an important source of inspiration for van Alsloot, was Bruegel’s younger son Jan Brueghel the Elder (1568-1625), who perfected his close-up views of the forest in the closing years of the century.  It is perhaps no coincidence that van Alsloot’s easel paintings seem to begin around the time that Brueghel established his own links with the archducal court at Brussels (vi).  Indeed, Brueghel’s influence is very evident in the early works of Alsloot, especially in detailed and descriptive representation of nature, yet certain decorative impulses are also apparent in van Alsloot’s lacy foliage and sinuous tree trunks that bear witness to his early experience as a designer of tapestries, a field with its own rich tradition.  From an early age, he must, for instance, have been familiar with such famous tapestry cycles as those designed by Barent van Orley (c. 1488-1541) featuring the hunts of Emperor Maxmillian set in woodlands inspired by the Forêt de Soignes.

Documentary sources provide only sporadic glimpses of Denijs van Alsloot’s life.  The son of a Brussels tapestry worker of the same name, his birth probably in Brussels must have occurred around 1568.  The earliest reference to his name is a receipt dated 26 May 1593 for the gilding and decoration of the Garnier family monument in Notre-Dame-du-Sablon in Brussels.  The records of the Brussels painters’ guild do not mention his admission as a master, but show that he took on three apprentices between 1599 and 1604, the last being Pieter van der Borcht.  In 1599-1600 he entered the service of the Archdukes Albert and Isabella, who entrusted him with many important commissions.  In 1603 and 1604 van Alsloot received payments from them for the design and weaving of two pieces of tapestry.  The artist apparently did not take up easel painting until after 1606: his earliest dated painting is from 1607.  In 1611, he took on another apprentice, Willem de Moye.  No paintings dated after 1621 are known.  The guild records indicate that Denijs van Alsloot was still alive in January 1625, but in December 1626, two of his works that he had bequeathed to a niece were bought by the Archduchess Isabella.