Keep me updated about Dirck Hals:

A Musical Company in an Interior

Indistinctly signed and dated 1639 on the stretcher of the chair, lower left

A trio of musicians performs in a simple interior.  Centre stage is occupied by a flautist, dressed in a conspicuous, mustard-coloured doublet and large slouch hat, embellished with blue ribbons and feathers.  He leans nonchalantly against a chair and casts a sidelong glance towards the viewer.  A young man seated opposite him plays a violin, while a young woman, in a fashionable, flat lace collar, strums the strings of a lute.  At the back of the room, two couples are absorbed in an intimate conversation.  On the right, a cello and bow rests against a table, upon which lies a lute.  The room is furnished with a large, covered bed and the walls are adorned with marine paintings.  The scene is rendered mostly in muted tones of green, beige and brown, enlivened with accents of pink, pale blue and yellow in the clothing of the main protagonists.  The vibrant brushwork, especially in the rendering of silks and other fine fabrics, is characteristic of Hals’s painterly technique.

Paintings of merry companies are particularly associated with Dirck Hals, who devoted the majority of his oeuvre to variations on this theme.  Although he was not the initiator of this genre, he made it a personal speciality and his paintings of the young gentry at play, inside and outdoors, were hailed by his contemporaries as inventive and influential.  In 1628, his works were commended by Samuel Ampzing in his Beschrijvinge ende Lof der Stad Haerlem for his “neat little figures” and he also won the praise of Theodorus Schrevelius for being “very fine and pure in small pieces and figures”(i).

Although Houbraken claimed that Dirck Hals was a pupil of his more famous brother, Frans, his early work owes more in subject matter and style to the Rotterdam-born artist,  Willem Buytewech, who was active in Haarlem from 1612 to 1617.  In particular, Dirck Hals was inspired by a small group of Buytewech’s pioneering interiors, produced around 1620, depicting men and women drinking, smoking and making music (ii).  These merry companies display a sense of naturalism, which was new at the time, a light-hearted tone and an emphasis on contemporary fashions and pastimes.  Buytewech’s premature death in 1624, left the field open for Dirck Hals and others to exploit the theme as a popular genre in its own right.  During the course of the next twenty years, Dirck Hals painted numerous examples, depicting the amusements and amorous adventures of members of the gilded youth of his day.

Like many genre themes which developed as independent subjects at the beginning of the seventeenth century, the geselschapje (indoor merry company) and its closely related counterpart, the buijtenpartij (outdoor garden party), have their origins in earlier pictorial traditions.  In the sixteenth century, depictions of young people leading the high life had become firmly associated with the iconography of the Parable of the Prodigal Son and other biblical subjects.  Vestiges of this tradition are still apparent in the gallant outdoor companies, which were introduced in Amsterdam by David Vinckboons and popularised in Haarlem by Esaias van de Velde in the second decade of the seventeenth century.  These paintings of fashionably dressed figures making music, feasting and courting in the open air are the immediate antecedents of Hals’s own representations of the theme, which date from the first half of the 1620s and often contain moralising overtones.  For example, his large and impressive Fête Champêtre, in the Rijksmuseum, Amsterdam (iii), featuring a gathering of elegant young people in a park-like setting, who eat, drink and flirt with one another to the accompaniment of music.  In this painting the festive mood is, however, tempered by the motif of a chained monkey - a symbol of bridled lust - seated in the foreground, holding a piece of fruit – a clear reference to the forbidden apple of paradise – which serves as a warning to the viewer that pleasure should not degenerate into sinful debauchery.

Whilst Willem Buytewech seems to have been responsible for moving scenes of merry companies to the indoors, he only painted a handful of pictures of this type.  It remained for Dirck Hals to develop the theme, updating it and restyling it in a more secular vein.  In his hands, the didactic character of the early prototypes largely disappears and is replaced by a new emphasis on modern manners and pastimes.  Judging by the considerable number of scenes of merry companies produced by Hals during his career, his new gloss on the traditional theme must have struck a positive chord with the art-buying public.

The present painting is characteristic of Hals’s mature merry companies, which focus on fashionable young people enjoying the pleasures of making music and conversation.  Music and courtship go hand in hand and, whilst the suggestively parted curtains enclosing the bed in the corner, highlight the amorous intentions of the couples engaged in tête-à-têtes, there is no indecorous behaviour here.  Although some seventeenth-century viewers may have found a moralising message in this painting, such as a reminder that love, youth and beauty are as transient as the music’s sweet strains, the artist has not spelt out his intentions clearly.  It is more likely that in its time, as indeed it is today, the painting was appreciated for its sheer elegance and technical facility.

Although for many years this painting was ascribed to Hals’s younger Haarlem colleague, Jan Miense Molenaer, this attribution has now been rejected in favour of Dirck Hals (iv).  Whilst the picture’s large size is somewhat unusual for Hals, it is not by any means unprecedented in his oeuvre.  Indeed, there are more than a few examples of the artist working on this scale.  Furthermore, in terms of subject-matter, technique and figure style, it is entirely consistent with signed works by the artist.  Also characteristic of Hals is the rather vaguely defined interior space and the way in which the main protagonists strike theatrical poses.  By comparison, Molenaer’s figures from the 1630s are more robust and weighty and the settings in which they appear more carefully structured.

The younger brother of Frans Hals, Dirck Hals was born in Haarlem and baptised on 19 March 1591.  His parents, Franchoys Hals and Adriaentgen van Geertenrijck, had emigrated from Antwerp some time between 1585 and the year of Dirck’s birth.  According to Houbraken, Dirck studied with his brother Frans.  From 1618 to 1624 he was a member of the St. George Civic Guard, the company in which his brother served from 1612 to 1624.  Both Dirck and Frans were also members of the Wijngaertranken rhetoricians’ chamber.  Dirck was already thirty-six by the time he joined the Guild of St. Luke in 1627.  In 1620 or 1621 he married Agnieta Jansdr. and the couple had seven children, who were baptised in the Reformed Church.  Dirck is recorded in Leiden in 1641-42 and again in 1648-49 and may also have been resident there during the intervening years.  The artist probably returned to Haarlem in 1648 where he died and was buried in the Begijnhofkerk on 17 May 1656.

iv  Based on a photograph, Dennis Weller cast doubts on the traditional attribution in a private
communication, dated 16 September, 2009.  Based on first-hand inspection of the picture after cleaning,
Fred G. Meijer, Curator, Department of Old Netherlandish Painting, RKD, The Hague, confirmed the
attribution to Dirck Hals. 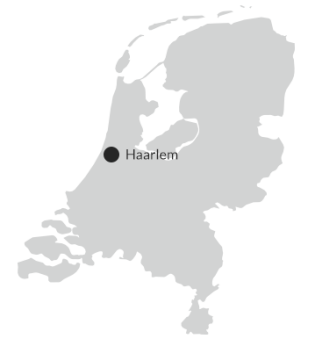 Keep me updated about Dirck Hals: