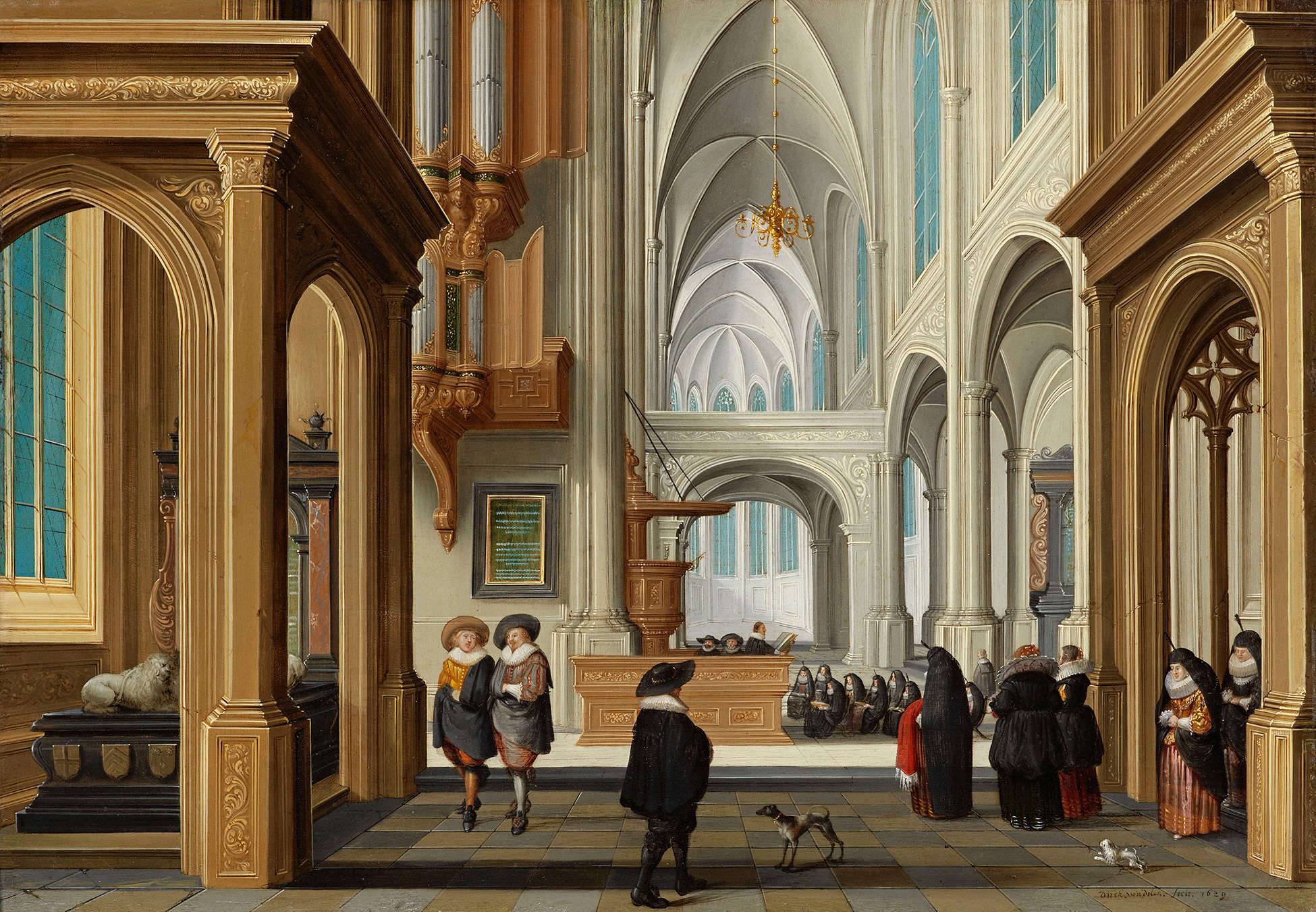 A Church Interior with an elegant Company attending a Christening

This small painting on copper is a comparatively early work by Dirck van Delen, who worked mostly in the area of Middelburg in Zeeland, the southwestern, coastal province of the Netherlands.  Middelburg is closer to and (via the Scheldt) better connected with Antwerp than with the major Dutch cities, and this is to some extent reflected in artistic styles: van Delen has more in common with Flemish architectural painters such as Pieter Neefs the Elder than with Pieter Saenredam in Haarlem, quite as the flower still lifes of Ambrosius Bosschaert the Elder and Balthasar van der Ast in Middelburg are closely associated with those by Jan Brueghel the Elder and other Flemings.

However, van Delen was among the prominent Middelburg artists (Adriaen van de Venne is another) who were well connected with the court of Prince Frederik Hendrik and its social circle at The Hague, where exquisite cabinet pictures like this one were collected. Van Delen himself was a socially prominent figure:  shortly after his marriage in 1625 he became master of the toll-house in Arnemuiden, near Middelburg, and for over four decades he served almost continuously on the town council, mostly as burgomaster. He would have found clients in this circle also, for architectural pictures of the kind he painted – palace interiors and exteriors, and imaginary church interiors – were expensive in van Delen’s day, and appealed to sophisticated collectors with an interest in refined execution, perspective effects, and architecture per se.  The grandest example of this taste in the Northern Netherlands is the set of five canvases (each about ten feet high) by van Delen in the Rijksmuseum, Amsterdam, which he painted ca. 1630-32, probably for the house of Floris II van Pallandt van Culemborg on the Lange Vijverberg in The Hague.  The two Princes of Orange (Maurits and Frederik Hendrik), Frederick V of the Palatinate and his wife Elizabeth Stuart, and other princely figures are seen in palatial porticos and rooms.

The present picture shows a Protestant service in progress in a small Gothic church with late Renaissance elements, such as the choir screen, pulpit, organ, entranceway and princely tomb. The fame of a figure from the recent past is balanced by the hopes for the future, in the form of the red-draped bundle in the arms of a woman who walks with her well-dressed companions to a christening.  The ceremony was a fairly common subject in Flemish and Dutch views of church interiors, and it clearly suggested to contemporaries the importance of religion in the course of life.  In this respect, small, finely painted church interiors such as this one might be compared with late Medieval Books of Hours, for faith is embodied in a luxury item meant to be held and examined with pleasure.

According to Cornelis de Bie , Dirck van Delen was born in Heusden, northeast of ‘s Hertogenbosch, around 1605.  He may have been a pupil of Hendrick Aertsz., a painter of architectural fantasies. He married his first wife, Maria van der Gracht, in Arnemuiden, near Middelburg, around 1625, and the couple settled there by 1626, the year their child was baptised. On 31 May 1628, van Delen became a citizen of Arnemuiden, residing there for the rest of his life and serving almost continually as a member of the town council, mostly as burgomaster.  He joined the Middelburg painters’ guild in 1639 and remained a member until 1665.  According to a painted epitaph, which still hangs in the town hall of Arnemuiden, van Delen was married three times.  When his first wife died in 1650, at the age of sixty-two, the painter was only forty-five years old.  The artist subsequently married Catharina de Hane, who was thirteen years his junior when she died on 24 December 1652 and, finally, he married Johanna van Baelen, who passed away on 16 December 1668, aged sixty-eight.

The staffage in van Delen’s paintings was sometimes provided by other artists, including Dirck Hals, with whom he collaborated in the late 1620s , Pieter Codde, Anthonie Palamedesz. and Jan Olis.  He visited Antwerp in 1666 to collaborate with Theodore Boeyermans on a large allegory, commissioned by the city’s guild of St. Luke and apparently revisited Antwerp in 1668 or 1669.  He died, aged sixty-six, on 16 May 1671 in Arnemuiden. Although he had at least one son, no children survived him. The inventory of his estate testifies that he was well-to-do.