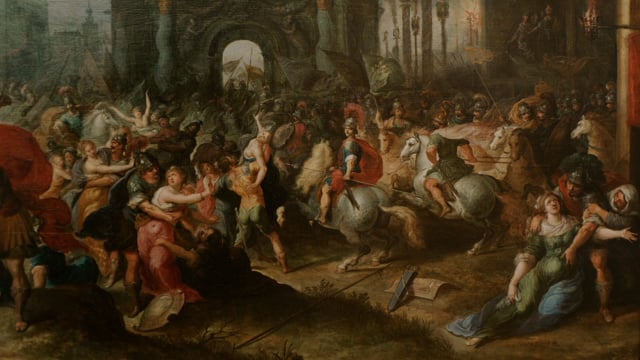 The Rape of the Sabine Women

Private collection, Belgium, for at least 50 years, until 2021

Essay
The most famous and productive member of a large family of artists, Frans Francken the Younger was born in Antwerp in 1581.  He trained with his father Frans the Elder (1542-1616), and joined the Antwerp painters’ guild in 1605.  His reputation rests chiefly on his small-scale cabinet pictures with religious, mythological or allegorical themes, though he painted many other genres as well.  He is remembered for his role in introducing several new themes into Flemish painting, such as the depiction of the interiors of art galleries ((kunstkammern or cabinets d’amateurs), or genre scenes populated by monkeys (singeries).

The story of The Rape of the Sabine Women is related by several classical authors.  Although accounts vary, the key elements of the story are consistent.  Romulus, the founder of Rome, built an impressive city, but he realised that there were not enough Roman women to ensure the future growth in population of the young nation, so he devised a ruse to overcome this problem.  He invited the neighbouring Sabines to come to a festival, together with their wives and children.  During the celebrations, at a given signal, the young men of Rome stormed the crowd, abducting the young, unmarried women and driving off their relatives.  Three years later, the Sabines took revenge by attacking Rome, but the conflict was prevented by the women, who stood between their brothers and their Roman husbands, to whom they had become reconciled.  Thus peace between the two peoples was achieved.

Francken has chosen to illustrate the episode of the abduction itself.  The scene is set in a city square against the backdrop of a triumphal arch.  Festival-goers throng the city centre, where a theatrical performance is underway on a temporary stage and fireworks are being let off.

Romulus is seen in the left of centre foreground astride a grey horse, clad in a red cloak and plumed helmet, and looking directly at the viewer.  Responding to his command, soldiers on foot and on horseback force their way into the crowd, seizing the Sabine maidens as they go.  A melee of wildly gesticulating figures fills the square and confusion reigns.  The terrified young women do their best to resist their capture with waving arms and imploring expressions, while the older women try in vain to protect them.  A particularly poignant scene is unfolding in the left foreground, where a little group of older women, mothers and frightened small children watch in horror as armed soldiers drag their daughters away.  Francken has emphasised the muscular physique of the Roman soldiers in contrast to the pale skin of the defenceless women in order to heighten the sense of violence and drama.  The characterisation of the figures, especially the women with their wild eyes and exaggerated gestures, as well as the bright, transparent colours and glazy technique are typical of Francken’s work from the 1630s.

The theme of abduction was a popular subject in painting from the sixteenth century onwards.  Francken, who excelled at large crowd scenes, no doubt seized upon the story because it offered him the opportunity to depict large numbers of intertwined male and female bodies, as well as an expressive range of gestures and emotions.  As was often Francken’s practice, he treated the subject on more than one occasion: there is a version in the Musée e’Art et d’Histoire in Hazebrouck, France, and another, which passed through Christie’s auction rooms in 1942, is recorded in Ursula Härting’s 1989 catalogue raisonné of the painter’s work.  Although these variants share certain motifs, the compositions are largely different in conception.

BIOGRAPHY OF THE PAINTER

Biography
The most productive and illustrious scion of the Francken family of artists, Frans Francken the Younger was born in Antwerp in 1581.  He is presumed to have served his apprenticeship in the studio of his father, Frans Francken I, but also probably trained in Paris with his uncle, Hieronymous I.  In 1605, Frans II became a master of the Antwerp Guild of St. Luke and, in 1615, he was elected Dean.  In 1607, he married Elisabeth Placquet by whom he had seven children.  Documents reveal that he worked directly for the art dealer, Christian van Immerzeel and, although he only registered one apprentice in the Guild, he certainly had other assistants including his brothers and sons.  His greatest skill was as a figure painter and he collaborated with at least twenty of the leading landscape, still life and architectural painters of the day including Jan Brueghel the Younger, Abraham Govaerts, Joos de Momper II, Tobias Verhaecht, Bartholomeus van Bassen, Pieter Neefs I and II, Hendrick van Steenwijck and Paul Vredeman de Vries.  He died on 6 May 1642 and was buried in the Church of St. Andrea in Antwerp.
Download Essay
Browse all paintings
©2023 Johnny Van Haeften Ltd - Registered Company No. 01345215
Web Design : naked ideas
CLOSE