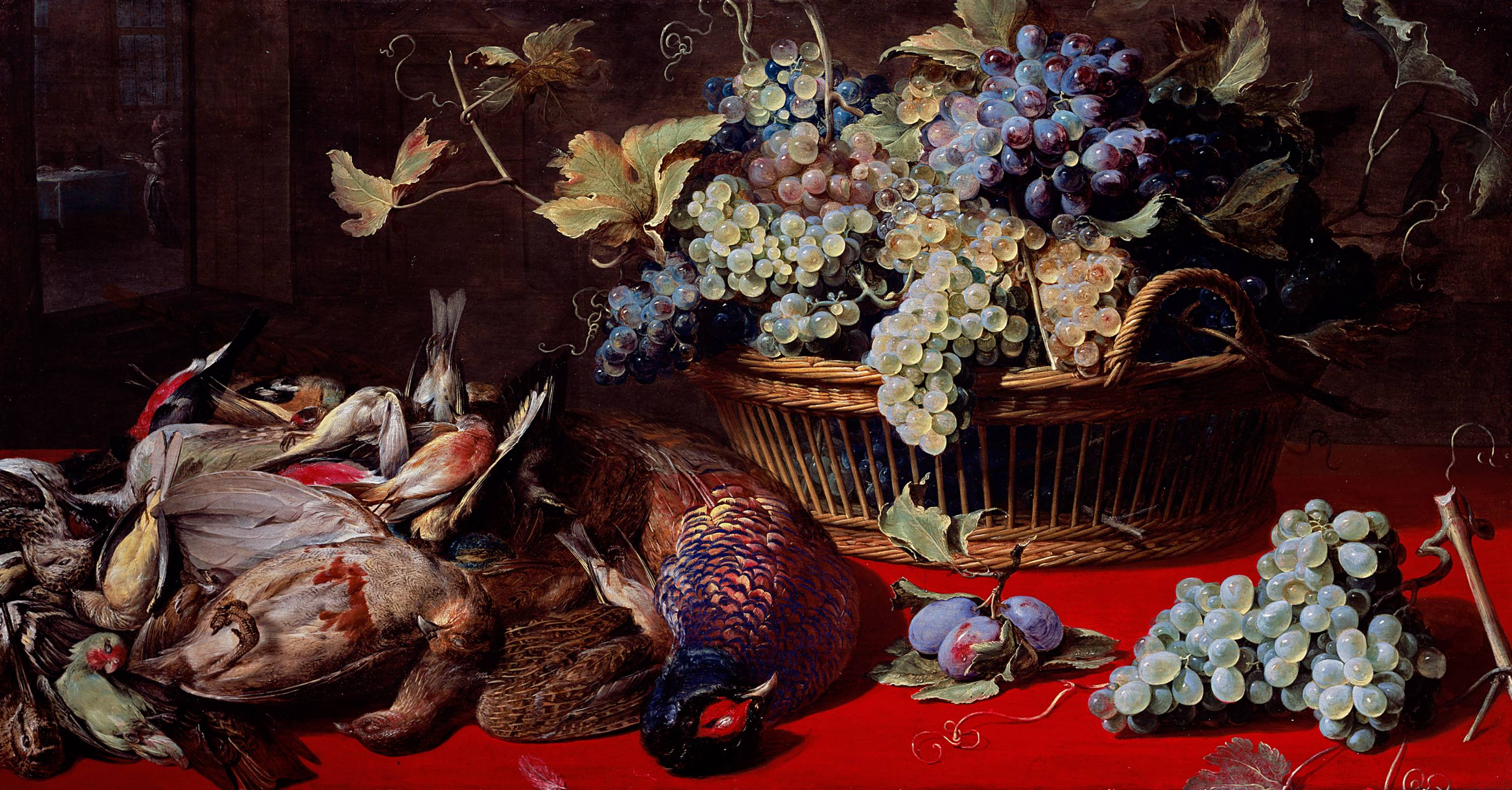 Keep me updated about Frans Snyders:

A Still Life of dead Game on a red Table Cloth, with Plums and Grapes and a Basket of Grapes behind

This previously unknown painting by Frans Snyders contains all of the elements one expects from a seventeenth-century tabletop still life. A basket of grapes and a group of dead birds have been placed on top of a table covered with a red cloth. The compositional elements are tightly framed and the only suggestion of context is a view into an adjacent room at the upper left. As with many of Snyders’ early paintings, Still life with dead game and a basket of grapes is an exercise in balance. He has divided the composition diagonally from the upper left to the lower right, creating two roughly equal halves and answering the void made by the open door with the bunch of grapes at the lower right. The contents of the basket far exceed its capacity and grapes, leaves, and stems spill exuberantly over the sides. The dense grouping of birds balances the weight of the basket’a mass of beautiful little bodies, all feathers, beaks and feet that is tied to the ground through intermittent patches of red. Still life with dead game and a basket of grapes is also a study in contrasts. The texture of the feathers at the lower left, from the stiff tail feathers that punctuate the pile of still warm bodies to the soft, variegated feathers on the breast of the bird at the centre of the group, contrasts with the taut, smooth skins of the grapes, translucent and chilly to the touch. These are the raw materials that with preparation will be transformed into a meal and served up, as in the scene in the background, for our consumption.

Snyders was an exceptional technician from the earliest stages of his career. (i)  His first known works, Still life with game, birds, fruit, and vegetables of 1603 and The Kitchen Maid of c. 1605, reflect his interest in the kitchen pieces of Pieter Aertsen and Joachim Beuckelaer. However, by the time he painted Still life with dead game and a basket of grapes around 1614, his tastes had changed (ii).  He had travelled to Italy in 1608 under the aegis of Jan Brueghel the Elder and worked for several years in Rubens’ studio, where his collaboration on the Recognition of Philopoemen (c. 1610, Madrid, Prado) had a dramatic effect on his later development (iii).  With works such as Still life with dead game and a basket of grapes, Snyders updated a pictorial type that had been popular since the beginning of the century. He transformed the kind of tabletop still life painted by artists such as Floris van Dijck, characterised by the inclusion of a broad range of objects, largely by limiting its scope. The elements he did include, however, take up more space within the composition and are considerably more elaborate in their form. Despite the absence of van Dijck’s wine, cheese, sweets and nuts, Still life with dead game and a basket of grapes nonetheless conveys a sense of abundance, a theme upon which Snyders elaborated throughout his career.

Snyders painted this composition twice. Another, slightly larger version of Still life with dead game and a basket of grapes on canvas appears in Hella Robels’ 1989 study. (iv) It is virtually identical to this painting but has been extended several inches at the bottom to include the front edge of the table and reduced at the left. Great care has been taken in the execution of both versions and only the slightest differences distinguish one from the other. Indeed, the differences only emerge after careful study and consist of such slight changes as a more or less open curl to the vine tendril in the middle of the panel at the far right or a difference in its diameter from one work to the other. The perspective of the open door at the upper left is slightly different in each painting and the brown feather that extends across the threshold is more fully articulated in the version on panel. Details such as these give this painting a more subtle appearance and, together with the fact that Snyders painted compositions of this size most often on panel (reserving canvas for his larger works), it seems likely that it was painted first. Copies are unusual within Snyders’ oeuvre but, when they do appear, they are virtually indistinguishable from the original and most often painted by Snyders himself. (v) His studio produced primarily copies of his larger works on canvas, such as hunting and market scenes, and smaller original compositions comprised of motifs from the larger works.

Frans’ father, Jan Snyders, although not a painter himself, was the keeper of an inn said to be frequented by artists. Frans was apprenticed to Pieter Bruegel the Younger in 1593 and may also have been a pupil of the history painter Hendrick van Balen. He became a master in the Antwerp St. Luke’s Guild in 1602 and, in the spring of 1608, went to Rome and Milan where, through his connection with Jan Brueghel the Elder, he was hosted by Cardinal Federico Borromeo. Snyders left Milan in April 1609 and was back in Antwerp in early July. From 1610 he was employed by Rubens and on 23 October 1611, Snyders married Margareta de Vos, sister of the painters Cornelis and Paul de Vos. By 1622 he had bought a house on the Keizerstraat and other properties for investment. He served as dean of the guild in 1628 and, beginning in 1636, collaborated with Rubens on sixty hunting scenes for Philip IV’s Torre de la Parada and Palacio Real in Madrid. Margareta died in 1647 and Frans died ten years later, leaving his fortune to his sister. His extensive collection, which included works by Rubens, van Dyck, Hendrick van Balen, Pieter Bruegel the Elder, and Lucas van Leyden, was bought by the Antwerp art dealer Matthijs Musson. He produced a large number of paintings during the course of his career and must have had a large workshop, although only three apprentices are mentioned in the guild records. His pupils most likely included his brother-in-law, Paul de Vos, and Jan Fyt.

iii) Rubens' preparatory oil sketch (Paris, Louvre), apparently made with Snyders in mind, is seen as pivotal in the emergence of the baroque still life and essential to Snyders' development. See Koslow (1995), p. 74.

iv) See Robels 1989, p. 256-57, cat. 118. She records the painting as having been in the Ivar Kamke collection, Stockholm, in 1936 and then in the Gram-Hansen collection in Copenhagen. Its present location is unknown and she gives no source for the photograph. 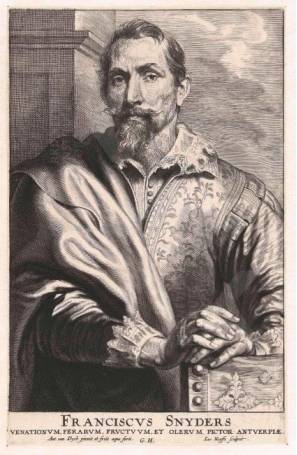 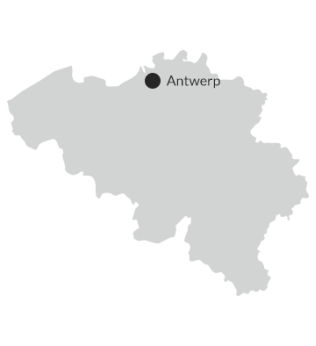 Keep me updated about Frans Snyders: