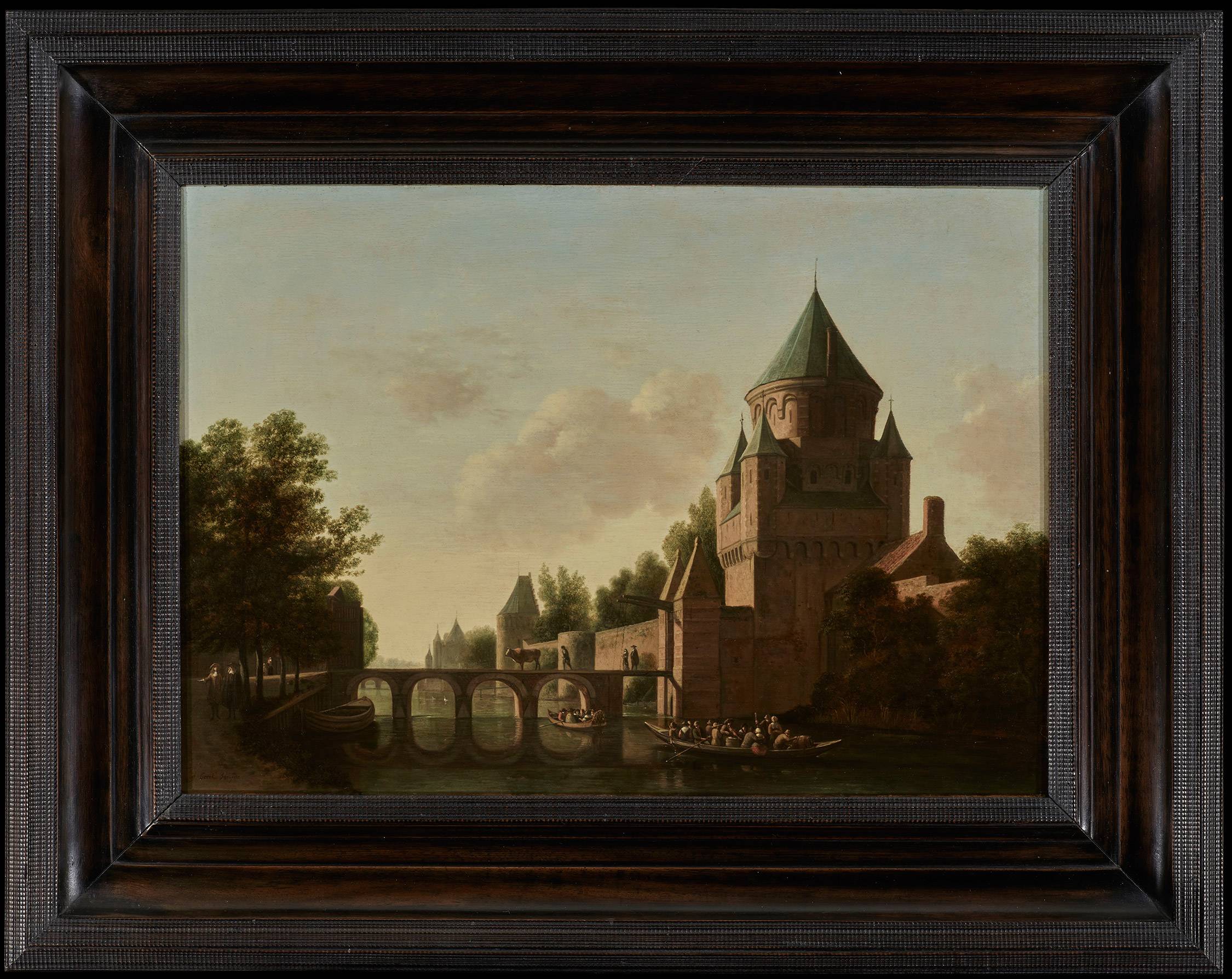 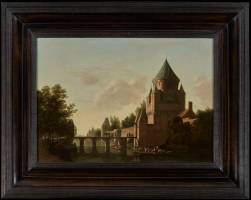 An evening View of the Kleine Houtpoort in Haarlem

We are reproducing here the catalogue entry from our exhibition catalogue of 1992 which was written by the late Professor Cynthia Lawrence, author of the 1991 monograph on Gerrit Berckheyde.

Berckheyde’s panel presents a view of the Gasthuissingel, a canal intersecting with the Spaarne river to the south of Haarlem, with the Kleine Houtpoort in the right foreground.  In the distance are two of the city’s other medieval monuments, the Kalistoren, a tower used to store powder, and, in the far distance, the Grote Houtpoort.  A picturesque bridge leads out of the Kleine Houtpoort and over the river in the direction of the Haarlemmerwoud, a wooded area used for grazing and recreation.  The composition of Berckheyde’s painting, as well as its soft golden light and lush atmospheric qualities, prompts comparisons with contemporary works by the French classicist Claude Lorrain which also include a prominent structure placed to one side of a body of water which recedes towards the rising or setting sun.  While Berckheyde’s realistic depiction of this familiar Haarlem landmark evokes a sense of period ambiance, his analytical approach to composition, his geometric expression of forms, his stylized patterns of light and shadow and his apparent detachment from his subject create an impression of abstraction that strikes the twentieth-century eye as modern.

This view of the Kleine Houtpoort appears to be based on a drawing, variously attributed to both Gerrit and his brother Job Berckheyde (1630-93), in which the gate is subtly delineated in crisp pen outlines and translucent washes (i).  Just as other Dutch cityscape and landscape specialists, Gerrit made careful sketches of his subjects from life which later served as models for paintings executed in the studio.  The drawing is also the source for two other views of the Kleine Houtpoort attributed to Gerrit: while these pictures are nearly identical to that under discussion in terms of their perspective and presentation of the gates and wall, they exhibit significant variations in the design of their staffage. (ii)  The Kleine Houtpoort also appears in other pictures by Berckheyde where it is presented along with the church of St. Bavo. (iii)  His view of the Grote Houtpoort in the Museum Smidt van Gelder, Antwerp (iv) shows a reverse view of the Gasthuissingel with the tower of the Kleine Houtpoort and its arcaded bridge in the distance.(v)

Haarlem’s historic gates and city walls, which punctuate the panoramic recession along the canal toward the brightly lit horizon, are frequent subjects in Berckheyde’s oeuvre.  Samuel Ampzing’s versified description (1628) of these venerable landmarks praises their crucial role in the defense of the city during the Spanish siege of 1572-73. (vi)  Although the Kleine Houtpoort sustained significant damage during these manoeuvres, Berckheyde’s panel records its subsequent restoration during the early seventeenth century.  These monumental portals and towers dominated Haarlem’s skyline until their systematic destruction in the nineteenth century; (vii) today this picture has assumed the status of a memorial portrait.  Just as Ampzing’s passage lauds these structures as proud references to the city’s glorious past, Berckheyde’s presentation of the Kleine Houtpoort (and the adjacent tower and gate) may also refer, on one level, to its early history.  Throughout his career, Berchkeyde maintained a keen interest in period styles in architecture and how they might be used (alone or in contrast) to achieve a nostalgic or symbolic effect.

The “building portraits” of Pieter Saenredam (1597-1665) were an important model for Berckheyde’s presentation of his architectural subjects.  First of all, just as Saenredam’s views, those of Berckheyde tend to be accurate rather than capricious.  Secondly, in pictures by both artists, a building (or an urban locale) is always the dominant motif.  Berckheyde’s view of the Kleine Houtpoort not only demonstrates his preference for unobstructed vistas, but it also indicates that he employed a series of devices to enhance the prominence of the gate: isolated by his manipulation of space and light, and slightly exaggerated in scale, the foreshortened base and distinctive conical tower of the Kleine Houtpoort present a dramatic silhouette against the paler sky.

Berckheyde also designed the foliage and staffage in this scene to formally enhance his presentation of the Kleine Houtpoort as well as to establish a sense of atmosphere or mood.  The soft irregular outlines of the graceful trees provide an effective contrast with the solid angular shapes of the bridge, gates, towers and city wall; furthermore, Berckheyde has expressed the rising row of trees directly behind the wall and gate in terms of a backdrop which links the Kleine Houtpoort with those structures further up the river as well as with the left and right foreground.

Although Berckheyde’s staffage is usually relegated to the more densely shaded areas of his picture (such as the two men on the far left) so as not to draw attention from the work’s architectural subject, here the presentation of the figures on the bridge, as well as the inclusion of the two crowded ferry boats just below, introduces a more emphatic genre component.  Just as the foliage, the placement of these motifs has been carefully calculated in terms of the structures behind them.  For example, the passage of the cow, the herdsman and the promenading couple on the bridge has been edited into a frozen series of isolated vignettes by the wall and towers, just as the boat below is framed by the arch of the bridge and its complementary reflection.  In both instances, Berckheyde indicates his apparent fascination with the geometric components of complex forms, as well as with their rhythmic repetition.

Several of the staffage elements in this picture are frequently repeated in Berckheyde’s oeuvre.  The ferries recall the elegant pleasure yachts which appear in some of his Amsterdam views from the 1670s, or in his scenes of boating on the Hofvijver in The Hague from the later 1680s.  Although Job Berckheyde, a Haarlem church interior and genre specialist, is frequently given credit for the figures in his brother’s pictures, it is more likely that he was one of a number of staffage specialists (including Johan van Huchtenburg, Dirck Maas and Johannes Lingelbach) regularly employed by Gerrit for this purpose.(viii)

The panel indicates that Berckheyde’s distinctive approach to the formal problems of light and colour as they pertain to the realistic Dutch townscape.  First, he introduces emphatic tenebristic effects to affect stronger modelling of the gate, specifically to accentuate the structural forms of the tower, turrets and square base, and to enhance the dramatic possibilities of an essentially unexceptional view.  In this regard, his depiction of the Kleine Houtpoort resembles his treatment of the massive towers in his views of the Romanesque churches in Cologne.(ix)

Gerrit Adriaensz. Berckheyde was baptised in the Reformed Church in Haarlem on 6 June 1638.  He was the youngest son of the butcher Adriaen Joppen Berckheyde and his wife Cornelia Gerritsdr. Pancier.  His brother, Job (1630-93), who was eight years his senior, probably taught him to paint.  The two brothers made a trip along the Rhine in Germany, probably in the early 1650s (x), visiting Emmerich, Kleve and Cologne where they stayed for an extended period.  From Cologne the brothers travelled further up the Rhine to Bonn, Mainz, Mannheim and finally to Heidelberg, where they found employment as court painters to Karl-Ludwig, Elector of the Palatinate, and were rewarded with a variety of honours, including gold medallions (such as that worn by Job in his self-portrait in the Frans Hals Museum).  Both brothers had probably returned to Haarlem by July 1654, when Job was admitted to the Haarlem guild of St. Luke.  In 1660, Gerrit also joined the Guild, and produced his first signed and dated works the following year.  During this period, he shared a house with Job and his sister Aegje in the Sint-Jansstraat, close to the Grote Markt.  According to the artists’ eighteenth-century biographer Arnold Houbraken, neither brother ever married.

In 1666, Gerrit and Job became members of the Haarlem rhetoricians’ chamber De Wijngaardranken (The Vine Branch), an association to which many artists belonged, for which they both held administrative positions: Gerrit was a warden in 1667 and an ensign from 1676-1681.  In 1679 the two brothers signed a lease on a house next to the bell-tower, near St. Bavo’s church.  Both brothers held offices in the painters’ guild during the 1680s and 1690s.  Job died in 1693 and, five years later, Gerrit drowned in the Brouwersvaart, while taking a shortcut through a private garden after leaving a tavern.  He was buried in the nave of the St. Janskerk on 14 June, 1698.