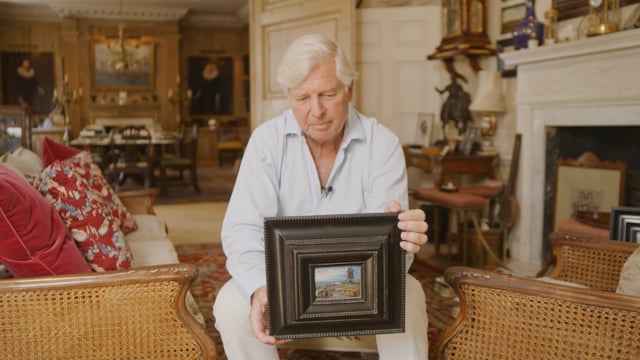 An extensive Landscape with a Windmill

Sold to a private collector in Europe
Provenance

The reverse of the copper is stamped with the cipher and monogram of the Antwerp panel-maker Peeter Stas (c. 1565-after 1616)

This exquisite little painting, executed on a copper panel that would fit comfortably in the palm of one’s hand, exemplifies the extraordinary delicacy of Brueghel’s touch which earned him the nickname “Velvet” Brueghel.  Within its tiny compass, the artist has captured a panoramic view of the Flemish countryside taken from a slightly elevated vantage point.  A large windmill towers over the gently undulating terrain, forming the dominant motif of the painting.  A rutted dirt road, flanked on the left by a small river, snakes its way from the foreground, past the windmill, and then onwards into the middle distance and beyond.  Horse-drawn carts and travellers on foot wend their way along the winding track.  In the left foreground, a man attends to his pack horses, while a little further on, a peasant woman waits patiently by the side of the road, with her horse and cart, while the miller prepares his sacks of grain for transport.  The luminous palette and refined yet lively brushstrokes work together to create a precious, jewel-like picture intended for close scrutiny.

One of the most versatile and influential painters of his time, Jan Brueghel the Elder was the son of the renowned draughtsman and painter Pieter Bruegel the Elder (before 1525-1569).  Born the year before his father died, he is said to have received his earliest artistic training from his maternal grandmother, Mayken Verhulst, a miniaturist and watercolour painter.  In 1589, he travelled to Italy, spending the years between 1592-94 in Rome, where he enjoyed the protection of Cardinal Ascanio Colonna and Cardinal Federico Borromeo, a discerning and enthusiastic collector, who became his best patron and a lifelong friend.

During his time in the Eternal City Brueghel began to experiment with painting on copper.  The practice of painting on a copper support was already fairly well established in Italy by that date, and Brueghel was probably introduced to it by the Flemish landscapist Paul Bril (1554-1626), who had arrived in Rome some ten years earlier.  Bril himself began to paint landscapes on small copper panels around 1592, and the following year, he and Brueghel collaborated on a painting on copper.  The smooth reflective surface of the metal proved to be ideally suited to Brueghel’s detailed miniaturist idiom, enabling him to produce works of extraordinary delicacy and brilliance of colour.  These qualities were greatly admired during his lifetime, as Cardinal Borromeo wrote in 1625:  “Even works of the smallest size by Jan Brueghel show how much grace and spirit there is in his art.  One can admire at the same time its greatness and its delicacy”[i].  In 1596, Brueghel returned to The Netherlands and settled in Antwerp, where he established himself as one of the preeminent painters in the Southern Netherlands.  In 1606, he was appointed court painter to the Archdukes Albert and Isabella in Brussels, although he continued to reside mainly in Antwerp.  His career was cut short on 13 January 1625, when he died suddenly in a cholera epidemic that swept through Antwerp.

Jan Brueghel the Elder specialised in flower still lifes and landscapes, often with religious scenes, and allegorical and mythological subjects. In the latter branch of painting, Brueghel is recognised as an important innovator.  His earliest landscapes, painted in the 1590s, belong to the sixteenth-century Mannerist tradition of landscape painting characterised by fantastical panoramas of mountains and seacoasts, taken from a high vantage point, and dense forest interiors, seen from close-to.  Also typical of his Mannerist landscapes is the use of bizarre perspectives and a tri-partite colour scheme (using brown for the foreground, green in the middle ground and blue for the far distance).  However, in the first decade of the seventeenth century, Brueghel gradually moved away from Mannerist conventions towards a new, more naturalistic vision of landscape inspired by the scenery of Flanders.  Mountain peaks and plunging valleys are replaced by flatter, more open terrain, described from a more natural viewpoint, in simpler, more cohesive compositional schemes.

The present painting belongs to a homogeneous series of landscapes, painted by Brueghel between about 1606 and 1612[ii], in which he depicted an extensive landscape with one or more windmills as the primary theme.  In the earlier examples from this group, the transition between the foreground and background is still not fully resolved, but in this little painting dating from around 1610-12, the eye is led effortlessly by means of the winding road from the foreground into the hazy blue distance.  The careful placement of the figure groups along the road in progressively diminishing size further enhances the sense of recession.  Notwithstanding the picture’s diminutive format, Brueghel succeeds in creating a sense of boundless space.  Although vestiges of the three-colour scheme remain, there is a greater degree of naturalism.  Such progressive traits foreshadow developments that were to take place in Dutch landscape painting in the second decade of the seventeenth century.

Brueghel often repeated specific figural groups in his landscape compositions. The motif that appears in the left foreground here of a man in a red top, with a pair of grey and bay pack horses, seen from behind, was one of Brueghel’s favourites.  It recurs in a painting of a similar subject, dated 1609,which was formerly with Richard Green, and again in two other paintings depicting panoramic landscapes with windmills, which appeared in sales in Sotheby’s in New York on 17 January 1992 (Lot 32) and in Sotheby’s in London on 5 July 2006 (lot 3)[iii]. However, in all three of these paintings, the artist reversed the colours of the horses.

Jan Brueghel was born in Brussels in 1568, the second son of Pieter Bruegel the Elder and Maeycken Coecke van Aelst.  His father died shortly after his birth and it is said that his earliest artistic training was with his maternal grandmother, Mayken Verhulst, a miniaturist and watercolour painter.  According to the biographer and art theorist, Karel van Mander, he was taught to paint in oils by Pieter Gotekindt in Antwerp.  Brueghel travelled to Italy between 1589 and 1596 and, in Rome, met Cardinal Federico Borromeo, who became his most important patron, with whom he conducted an extensive correspondence for the rest of his life.  Upon his return to Antwerp, he joined the St. Luke’s Guild and became dean in 1601.  He married Isabella de Jode in 1599 and, in 1601, their first son, Jan Brueghel the Younger was born.  He wife died suddenly in 1603, perhaps at the birth of their daughter, Paschasia.  In 1604, he travelled to Prague, returning to Antwerp later that year.  The following year he married Catharina van Marienberghe who bore him eight children.  In 1606, he was in Nuremburg and the same year he was appointed court painter to the Archdukes Albert and Isabella in Brussels.  Around 1613, he visited Holland on a diplomatic mission in the company of Rubens (1577-1640) and Hendrick van Balen (1575-1632).  In 1625, Jan Brueghel died from cholera during an epidemic which also claimed the lives of three of his children.