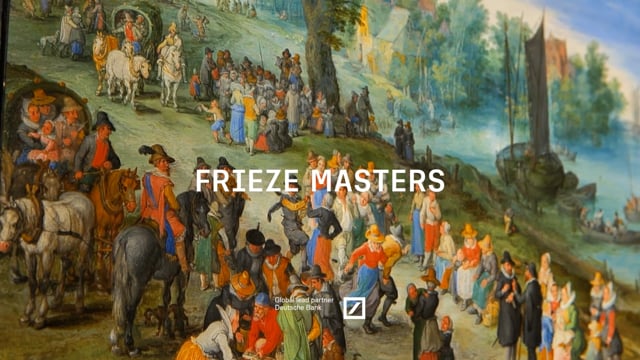 The edge of a village with people dancing on a riverbank, a fish seller and Jan Brueghel conversing with a friend

Sold to a private collector.
Provenance

Johann Wilhelm, Kurfürst von der Pfalz (Elector Palatine) (1658-1716), located in one of the two Gemäldekabinetten in the Schloss at Düsseldorf;
his brother Karl III Philipp, Kurfürst von der Pfalz (1661-1742), at Düsseldorf, and at Mannheim from 1730 when recorded there in the inventory of that year; illustrated in the 1731 drawing of the cabinets in the Mannheim Palace;
his nephew Karl Theodor von Pfalz-Sulzbach (1724-1799), Kurfürst von der Pfalz from 1743 and Kurfürst von Bayern from 1777, Mannheim and from 1798/9, Munich;
his successor Maximilian IV Joseph, Herzog von Zweibrücken, Elector Palatine and Elector of Bavaria, from 1806 König von Bayern;
by descent in the Bavarian Royal Collection by 1810, when housed at Schleissheim, according to von Mannlich’s inventory (see Literature); otherwise probably housed in Lespilliez’s Gallery in the northern wing of the Hofgarten;
by descent in the Bavarian Royal Collection, Munich, subsequently Bayerische Staatsgemäldesammlungen, kept in the Alte Pinakothek, Munich from 1838 (when inv. 205; from 1884 inv. 696) until 1923, when sold by exchange to Julius Böhler, Munich;
by whom sold in August 1923 to Hans Mettler (1876-1945) of Sankt Gallen, Switzerland;
sold by order of his Beneficiaries, Christie’s London, 29th June 1979, lot 12;
with David Koetser, Zurich, from whom acquired by a European private collector in 1979-80
Anonymous Sale, Sotheby’s, 9th July 2008, (lot 19)
With Richard Green, London
With Johnny Van Haeften, London
Private Collection New York, 2009 - 2022

This outstanding painting is one of the finest landscapes on copper by Jan Brueghel the Elder, nicknamed ‘Velvet’ Brueghel for the delicacy of his brushwork. By 1616, when this work was made, Brueghel was court painter to the Habsburg Regents of the Netherlands, Archduke Albrecht VII and the Infanta Isabella Clara Eugenia. His paintings were collected by royalty and aristocracy throughout Europe in his lifetime, and like those of his father, Pieter Bruegel the Elder (c.1525/30-1569), demand for them never waned. The edge of a village with people dancing was acquired by Johann Wilhelm, Kurfürst von der Pfalz (1658-1716) before 1716 and remained in the Palatine/Bavarian Royal Collection until sold from the Alte Pinakothek in 1923.

Jan Brueghel developed over several paintings the theme of a riverbank village with strong diagonal recession from right to left and human bustle on the left bank contrasted with the tranquillity of the watery world on the right. The forerunner of the group is the painting of 1606 in the Duke of Wellington’s collection at Apsley House[i]. The first of the true series, in which the viewpoint is lower and more intimate, the figures nearer and more numerous, is the painting in Bonn, dated 1611[ii]. Following this is the larger picture in Vienna, dated 1614[iii]. Brueghel also painted the composition in reverse, with the village on the right, such as the 1615 painting in Munich[iv]. This is on a copper plate of identical size to the present work and shares with it a Mannheim provenance, although they are not likely to have been conceived as a pair. With each work Brueghel attained a greater degree of pictorial sophistication, particularly in the arrangement of the figures. The present painting of 1616 is the culmination of the series, with its extraordinary delicacy, fluidity and sense of space. It is also the most elegant of the series, with the figures arranged in a balletic diagonal which leads the eye deep into the background of the picture.

Brueghel depicts the village on a market day, with well-dressed locals arriving by boat or covered waggon. In the foreground is a fish seller with a housewife bargaining for his wares. The exquisite fineness of Brueghel’s brushwork is apparent in this foreground group, with his understanding of every fold in the housewife’s golden dress and the intricacies of the green cloak of the man with his back turned to us. In the centre, a knot of peasants dancing in an impromptu kermesse lends whirling vitality to this focal point of the painting. Beyond them, a crowd in the shade of a tree listens intently to a man reading from a broadsheet; in the days of limited literacy, this was how most people received news of the outside world. In the left distance, the leafy village street is irradiated with soft sunshine. To the right is the harbour, with the shimmering, blue river and distant white sails enveloped in a Paradise-like haze.

In the right foreground, two elegantly dressed men in black discourse animatedly. The left-hand figure is a self-portrait of Jan Brueghel the Elder, easily recognisable from the fine 1612-13 portrait by Rubens of Jan and his family in the Courtauld Institute of Art, London[v]. The inclusion of the portrait suggests that this painting was made for a particularly favoured patron, with whom Jan was on terms of intimacy. Perhaps he is even the other black-clad figure in this work. There is only one other self-portrait in Jan’s oeuvre: in the 1614 painting in Vienna, cited above. To the right of the chatting gentlemen is a dazzling group of women and children wearing the finest lace and millstone ruffs, a symphony of blue, ochre, pink, green, yellow and red. Klaus Ertz has suggested that this strongly-lit group represents Brueghel’s family[vi]. If the lady in green is Jan’s second wife, Catharina van Marienberghe (d.1627), the little girl in blue could be their daughter Catharina (b.1610). However, there was no baby at the breast in 1616: Maria Brueghel was born in 1611 and Ambrosius (the painter) in 1617.

A smaller, exact copy of this painting in the Galleria Sabauda, Turin bears a signature and date of 1603 (or 1608), but is not of good enough quality to be autograph[vii].

This superb Brueghel was acquired by Johann Wilhelm, Kurfürst von der Pfalz (Elector Palatine) (1658-1716) for the Electoral Gallery in Düsseldorf at some time before his death in 1716. He was a major collector, patronizing contemporary artists such as Eglon van der Neer, Adriaen van der Werff, Rachel Ruysch and Jan Weenix. He also collected the work of masters of the previous generation, amassing a huge collection of paintings by Rubens which is in the Alte Pinakothek, Munich.

This Brueghel is not in Gerhard Karsh’s 1719 printed catalogue of the Düsseldorf Gallery, which omits the two hundred or more cabinet pictures kept in two private cabinets and thirty-four works in the Elector’s bedroom[viii]. It is however listed as no.2 in the printed but undated catalogue entitled Detail des Peintures du Cabinet Electoral de Dusseldorf (Wolfenbüttel, Herzog August Bibliothek)[ix]. Johann Wilhelm’s brother and successor, Elector Karl III Philipp (1661-1742), moved parts of the Düsseldorf collection to his new capital at Mannheim in 1730, where this picture is recorded in the inventory of that year as Ein bauern Tantz von F. Brugel (the F stands for Fluweelen, ‘Velvet’ Brueghel)[x]. It is recorded again in the last of four anonymous drawings made of the walls of the Cabinets of the Mannheim palace in 1731 (Paris, Bibliothèque d’Art et d’Archéologie, MS 409)[xi]. It hung on the bottom row, one of six similarly sized pictures by Jan Brueghel the Elder divided into two sequences of three (flanking a larger, joint work by Rubens and Brueghel), the middle work of the left hand row. The 1615 Munich painting, on copper of the same size, a variant of the present composition but in reverse, is in the middle of the right hand row[xii]. Both works were stated to have been at Mannheim in the 1884 and subsequent Alte Pinakothek catalogues.

The entire collection of the Wittelsbach Elector Karl Theodor was brought in 1798/9 to Munich, where the present painting is listed in the inventory of 1810 compiled by the Gallery director Christian von Mannlich, as one of a pair, hanging in the palace at Schleissheim. After 1836 it was in Leo von Klenze’s newly built Alte Pinakothek, where it is included in the 1838 catalogue by George von Dillis, and where it was last listed in 1908[xiii]. It is not listed in the 1912 catalogue and may well by then have been transferred to one of the Filialgalerien, or kept in the vaults. Brueghel’s Edge of a village remained in the Bavarian Electoral, Royal and State picture collections until 1923, when it was sold by exchange to the Munich dealer Julius Böhler. The Bayerische Staatsgemäldesammlungen made a number of sales, usually by exchange, in the 1920s and 30s, deaccessioning works from areas in which it was strong, such as Dutch and Flemish art, to acquire paintings from less well represented sections, such as Spanish art. Despite the loss of this wonderful Edge of a village, the Alte Pinakothek still has one of the finest collections of Jan Brueghel the Elder’s work in the world.

Julius Böhler sold Edge of a village in 1923 to Hans Mettler (1876-1945), who joined his father’s textile firm in Sankt Gallen, Switzerland in 1900, becoming a junior partner in 1912. He amassed an important collection of Impressionist and Post-Impressionist paintings, starting with a work by Ferdinand Hodler in 1915 and ending with a Cézanne Baignade in 1929. In the 1930s Mettler’s collecting largely ceased, and this Brueghel was probably his only major Old Master. Upon his death in 1945 he left a life interest in the paintings to his wife; after her death the Impressionists were sold at Christie’s London in July 1979, and the Brueghel on 29th June of that year.

Jan Brueghel the Elder, the second son of Pieter Bruegel the Elder (c.1525/30-1569), was one of the most eminent early seventeenth century Flemish masters. He became famous for flowerpieces, landscapes, genre scenes and allegories and was nicknamed ‘Velvet Brueghel’ because of the delicacy of his brushwork.

Jan was born in Brussels in 1568. He studied watercolour with his grandmother, Mayken Verhulst, and oil painting with Peter Goetkindt. Between 1589/90 and 1596 he travelled in Italy, visiting Naples, Rome and Milan. In Milan he was received by Cardinal Federico Borromeo, who was to become a lifelong patron. Brueghel returned to Antwerp in 1596, becoming master of the guild of St Luke in 1597 and dean in 1602. He visited Prague in 1604, gaining commissions from Emperor Rudolf II.

In 1608 Brueghel is recorded as being in Brussels as court painter to the Habsburg Regents of the Netherlands, Archduke Albrecht VII and the Infanta Isabella Clara Eugenia. He kept this appointment until his death. Around 1613 Brueghel travelled to the northern Netherlands on official business with Peter Paul Rubens and Hendrik van Balen, artists with whom he often collaborated.

In 1618 the city magistrates commissioned the twelve major painters of Antwerp to produce a sample of their painterly abilities for the Archduke. Jan Brueghel oversaw a collaborative series of paintings, Allegory of the Five Senses, in which Rubens, Josse de Momper the Younger, Frans Snyders, Hendrick van Balen, Frans Francken the Younger, Sebastiaen Vrancx and Jan himself participated.

Admired throughout Europe, Brueghel’s paintings are distinguished by a profusion of detail and painted with the delicacy of a miniature. The exquisite quality of his flowerpieces, and his fondness for Paradise landscapes, earned him the titles of ‘Flower’ and ‘Paradise’ Brueghel. He died in the Antwerp cholera epidemic of 1625, which also claimed the lives of three of his children. Brueghel’s son Jan Breughel II (1601-1678) succeeded to his studio.

[ix] See Literature. This appears to have been the source for van Gool, 1751, who follows the same sequence of pictures.

[xiii] It was never at Augsburg, as has been stated by Ertz, 1979 and elsewhere.