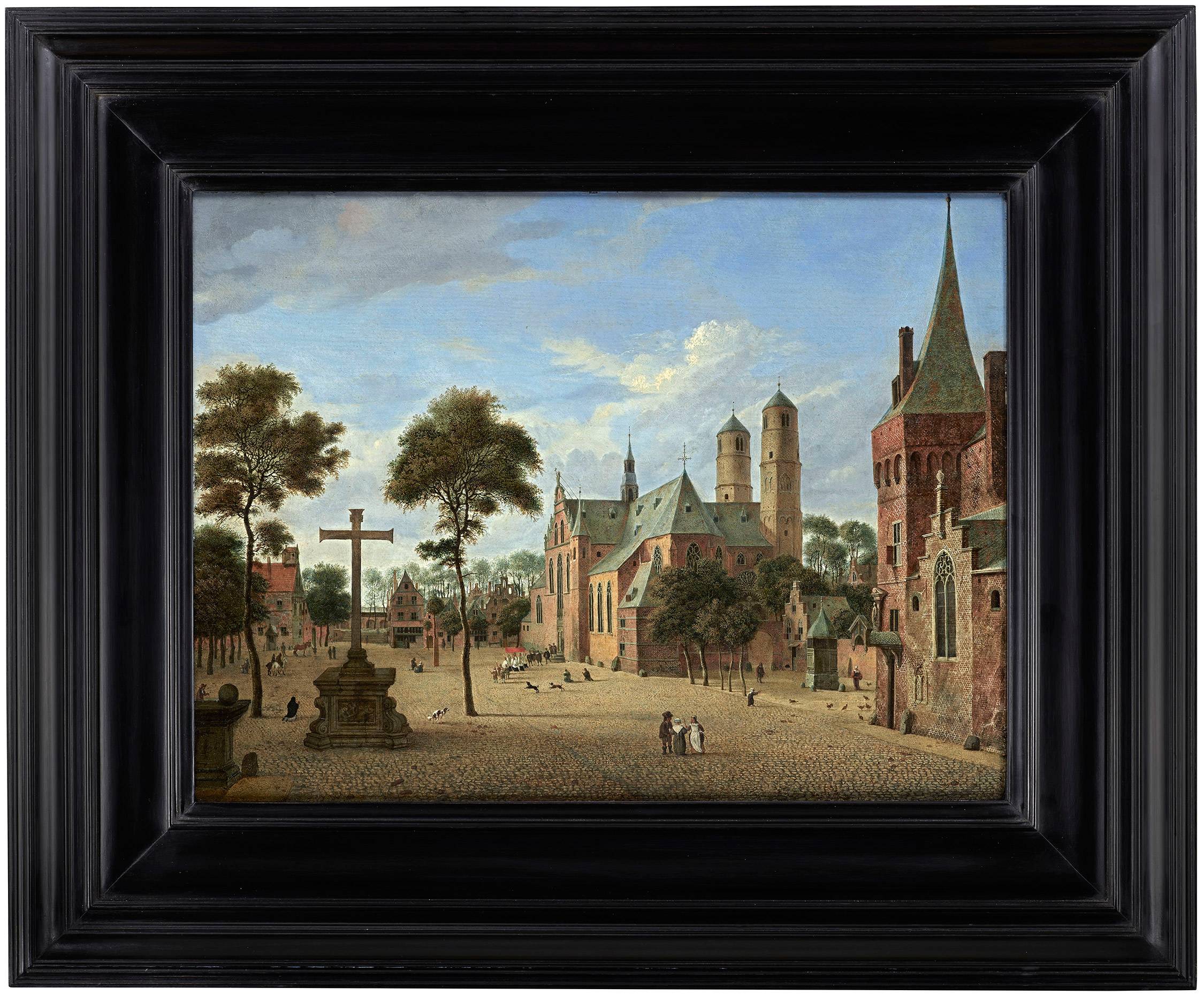 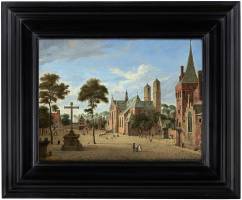 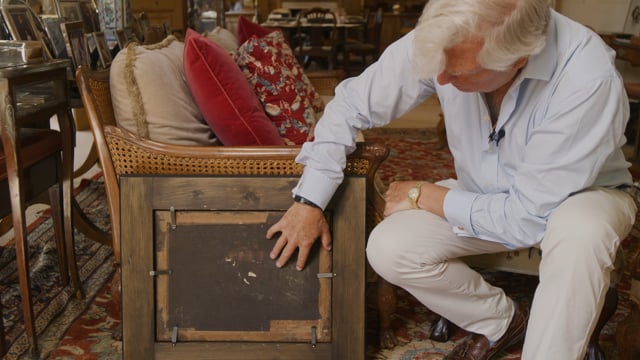 A Capriccio of Cologne

Together with Gerrit Berckheyde (1638-1698), Jan van der Heyden pioneered the development of Dutch cityscape painting.  In addition to his well-known views of Amsterdam, he painted vistas of other Dutch, Flemish and German cities, country houses and estates, landscapes and a few still lifes.

In this painting, Jan van der Heyden has taken a view looking across a cobbled square towards a substantial red-brick church.  A variety of houses and shops appears on the far side of the square, while a tall, turreted building, with ecclesiastical features, closes off the right-hand corner.  A small religious procession is making its way across the cobbles from the church door towards a prominent stone cross situated in the foreground.  The open space is further enlivened by small groups of townsfolk, dogs and horsemen.  The cool light of morning illuminates the scene picking out in remarkable detail each little cobblestone, brick, roof tile and leaf.  Typically for van der Heyden, he appears less concerned with offering a view of an identifiable place, than with capturing the flavour of this quiet urban neighbourhood and the gentle rhythm of its daily life.

This architectural fantasy appears to be loosely based on the architecture of Cologne. Whilst the cobbled square and red-brick buildings are strongly reminiscent of the old Catholic city, the exact location cannot be recognised.  The twin towers of the main church resemble those of St. Pantaleon in Cologne, but other elements of the same building seem to have been borrowed from St. Martin’s Church in Emmerich, and the setting is probably purely fanciful.  Such an amalgam of architectural features from a variety of sources is not uncommon in van der Heyden’s work, especially his views of German cities.

Jonathan Bikker has remarked upon the curious phenomenon that both Berckheyde and van der Heyden painted a significant number of views of Cologne (i).  Besides Amsterdam, van der Heyden painted more views of Cologne than any other city and Berckheyde also devoted a considerable part of his production to depictions of the city.  Their fascination with Cologne can be partly explained by the fact that both artists made trips to Germany at an early stage in their careers.  In van der Heyden’s case, he probably visited Cologne during one of the “speelreijsen” (pleasure trips) which he and his brother Goris (ii) made to the Rhineland in the late 1650s with members of the ter Heil family.  Alternatively, as Bikker and others have suggested, the two artists’ concentration upon Cologne may be an indication of the strong market for such views among German immigrants to the United Provinces and Dutch tourists who had visited the city.

With the signing of the Treaty of Münster in 1648, many years of warfare were brought to a close, opening up new opportunities for the Dutch to travel abroad.  While some chose to make the arduous journey to Italy, others explored countries closer to home, with Westphalia and the lower Rhineland becoming especially popular tourist destinations.  Van der Heyden and Berckheyde focused their attentions upon German towns and cities, but a number of other Dutch painters celebrated the dramatic beauty of the Rhineland in their landscapes, among them, Jacob van Ruisdael (1628-1682)and Nicolaes Berchem (1620-1683), who seem to have travelled together to the area around Bentheim in the 1650s, Jan van Goyen (1596-1656), Joris van der Haagen (1615-1669), Anthonie van Borssom (c. 1629-77) and Herman Saftleven (1609-1685).

Houbraken informs us that “It was [van der Heyden’s] custom to draw everything from life, then later to execute it on panel, painting in such details that his like has seldom been seen”.  And it is indeed likely that van der Heyden returned from his German expeditions with drawings made on the spot – now sadly lost – which provided him with a repertoire of architectural motifs for his later paintings.  Although only one of his Cologne views is dated – a painting of 1694 in Manchester (iii) – stylistic considerations and the style of clothing worn by the figures in his paintings suggest that he produced them over an extended period of time, beginning in the early 1660s.

Although van der Heyden’s scenes appear convincingly true-to-life, they are often only loosely based on reality.  Even in his views of recognisable locations it is apparent that he had no qualms about manipulating and rearranging the architecture, presumably in order to arrive at a more pleasing composition.  This is certainly true of his paintings of Cologne as an examination of several of his city views reveals.  If one compares, for example, the view of Cologne cathedral in the Wallace Collection, in London (iv) with another view of the same building in the National Gallery in London (v), one sees that although the cathedral is depicted from the same vantage point, the configuration of the buildings in the adjoining street and square are entirely different in the two paintings.  Topographical accuracy one can only conclude was not van der Heyden’s primary objective.  His ability, on the other hand, to capture the character and atmosphere of a place was unrivalled and his vistas, often taken from unusual viewpoints, achieve a remarkable sense of immediacy.

According to Wagner, the present painting may not have been, as once thought, a pendant to the View of Cologne Cathedral, in the National Gallery, London.  Although both were in the collection of Joseph Barchard in the mid-nineteenth century, they are stylistically very different.  However, it was probably the companion piece to a painting of the Church of St. Severin in Cologne, now in a private English collection (vi).

This painting has an interesting provenance, having belonged in the eighteenth century to the French financier Pierre-Louis Paul Randon de Boisset, who formed one of the most celebrated art collections of his time.  In the nineteenth century it was purchased by William Wells, who had made a fortune, first as a ship’s captain in the East India Company and then from owning the Blackwall Dock, in London (vii).  Wells formed a collection of Old Master paintings, including many first rate Dutch pictures, which was housed at his country estate, Redleaf, near Penshurst, in Kent.  He was also a major patron of Sir Edwin Landseer and a Trustee of the National Gallery of London.  Following his death, it came into the possession of Joseph Barchard, another enthusiastic collector of Dutch pictures, with a particular liking for Jan van der Heyden.

The third of eight children, Jan van der Heyden was born in Gorinchem (also known as Gorkum), near Dordrecht, on 5 March 1637.  His father was by turns an oil mill owner, a grain merchant and a broker.  In 1646, the family moved to Amsterdam, where van der Heyden’s father acquired citizenship.  When he was about fourteen, Jan probably joined his brother Goris in the business of producing and selling mirrors.  Houbraken reported that Jan first trained with a glass engraver and it is possible that his teacher may have been one of the most admired glass painters of the period, Jacob van der Ulft, who was also originally from the artist’s hometown.  Several examples of van der Heyden’s paintings on glass (verre eglomisé) have survived, probably dating from the early part of his career.

Van der Heyden’s family was Mennonite and he and two of his brothers married into the ter Heil family, who were of the same faith.  Jan married Sara ter Heil in 1661 and the couple had three children.  At the time of his marriage, van der Heyden stated that he was a painter by profession, though he never joined the painters’ guild, nor acquired Amsterdam citizenship.  Painting, however, was not his sole occupation and his prosperity was due mainly to his work as an inventor, engineer and municipal official.  He devised a street-lighting system for Amsterdam and, with his brother Nicolaes, invented a new type of fire pump, which transformed the efficiency of fire-fighting.  In 1669, he was appointed director of street lighting and, in 1673 the two brothers were put in charge of the city’s fire-fighting equipment.  Both these appointments provided the artist with a sizeable income.  In 1680, van der Heyden moved to the Koestraat near the St. Anthonismarkt, where he built a house for his family and a factory producing fire equipment.  In 1690, he produced an illustrated book on fire-fighting with his eldest son, Jan.  He died a wealthy man in 1712, still in possession of more than seventy of his own paintings.  Although his work was in great demand, he evidently had little need to sell his art to make a living.