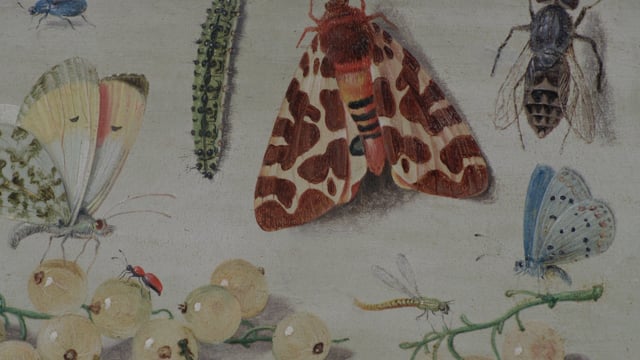 A Pair of Studies of Insects

Butterflies, a Garden Tiger Moth and other Insects with
Red and White Currants

Bees, a Butterfly, Beetles and other Insects with a Stem
of Sweet Peas

Sold to a private collector in the UK
Provenance

We are grateful to Dr. Fred G. Meijer for endorsing the attribution on the basis of images.  He has dated these works to 1653 on stylistic grounds.

A highly versatile and prolific painter, Jan van Kessel the Elder was known throughout Europe in his lifetime.  During the course of his career, he painted a wide range of subjects, from birds, animals and flowers, to allegorical landscapes and devotional themes.  A significant portion of his oeuvre consists of exquisitely-coloured, small-scale studies of insects, shells, flowers, plants, and other living creatures, seen against a pale background.  Executed predominantly in oils on copper, or panel, van Kessel’s finely-painted images reflect the burgeoning interest in natural history during the seventeenth century.  Several other Netherlandish and German artists produced similar works in watercolours, most notably the Antwerp-born miniaturist Joris Hoefnagel (1542-1601), who was court painter to the Emperor Rudolf II in Prague, but van Kessel was the only artist to make a speciality of this genre in the medium of oil paint.

This jewel-like pair of postcard-sized paintings exemplifies the genre.  Like many of van Kessel’s best works, they are executed on copper plates, a medium which enabled him to achieve an extremely high degree of finish.  They depict a variety of butterflies and moths, bees, beetles, wasps, and other insects, artfully arranged on a cream-coloured ground.  In one, a yellow Brimstone butterfly takes pride of place, perched on a sprig of orange wallflowers, while in the other, a boldly marked Garden Tiger moth vies for attention alongside an Orange-tip butterfly, a Small Blue butterfly and glistening strings of red and white currants. The characteristic features of each plant and creature are described in meticulous detail, right down to the veining of the insects’ wings and the hairs on the bee’s thorax, but unlike the dead specimens in an entomologist’s cabinet, they appear very much alive.  The butterflies, bumble bee, wasp and damsel fly appear on the wing, having apparently alighted on their host plant, while the other insects seem to rest upon, or crawl across the flat surface of the panel, casting shadows that create a strongly illusionistic effect.

This image and others of this same type are rendered with such accuracy that in most cases the individual species can be easily identified.  The careful placement of each specimen on the neutral ground achieves a decorative design, while at the same time displaying the characteristic features of each species to best effect.  Van Kessel must have studied many of his subjects from life, but he undoubtedly also drew upon manuscript illustrations and printed sources.  Close observation of the present examples reveal the use of several different viewpoints and certain inconsistencies in the fall of the shadows, indicating that the artist worked from a number of independent studies, rather than from an ensemble viewed as a whole.  Despite these small discrepancies, the artist’s paintings of the natural history subjects convey a lively impression of the variety and profusion of nature.

Van Kessel began to paint still lifes of this type in the early 1650s.  The earliest dated examples from 1653 are painted on panel.  It is likely that the present pair date from about the same time since their extremely refined technique is consistent with that of the earliest known examples.  In general, the earlier paintings display a more meticulous approach than the later ones.  Van Kessel continued to produce studies of this type well into the 1660s.  We know that small copper paintings of this type were often produced in series for the purpose of decorating collectors’ cabinets.  Few such pieces of furniture have remained intact and most  sets of little pictures have been broken up over time and dispersed among different collections.  It is likely that the present pair once formed part of a larger group, together with four little copper plates of similar subjects and near identical dimensions, which are today in the Ashmolean Museum, Oxford (i).

Jan van Kessel was baptised in the Sint Joriskerk in Antwerp on 5 April 1626.  His father, Hieronymus II van Kessel, was a painter and his mother, Paschasia, was the daughter of Jan Brueghel the Elder.  In 1634/35 he was registered in the Antwerp guild of St. Luke as the pupil of Simon de Vos and he is later said to have received instruction from his uncle and godfather, Jan Breughel the Younger.  Van Kessel became a master in the guild in 1644/45 as a flower painter.  He married Maria van Apshoven on 11 June 1647 in the Onze-Lieve-Vrouwekerk in Antwerp: the couple had thirteen children, of whom Ferdinand and Jan the Younger also became painters.  Van Kessel spent time in Spain as court painter to Philip IV and as a captain in the King’s army.  Although the specific dates of his stay are not known, it was most likely from the later 1640s to the early 1650s, based on a series of eight large flower paintings dated 1652, originally in Spain and very likely painted for the King.  Van Kessel was back in Antwerp by 1654 for the birth of his son, Jan the Younger.  The following year, he bought a house, “De Witte en de Rose Roos” (The White and Red Rose), suggesting that he had moved back to the Netherlands by that time.  He died in Antwerp on 18 October 1679 in relative poverty, having mortgaged his home to cover his debts.

i Jan van Kessel the Elder, A Set of Four Studies of Insects, Butterflies and Flowers, each oil on copper, 9 x 13 cm, Ashmolean Museum, Oxford, inv. no. A564-7.