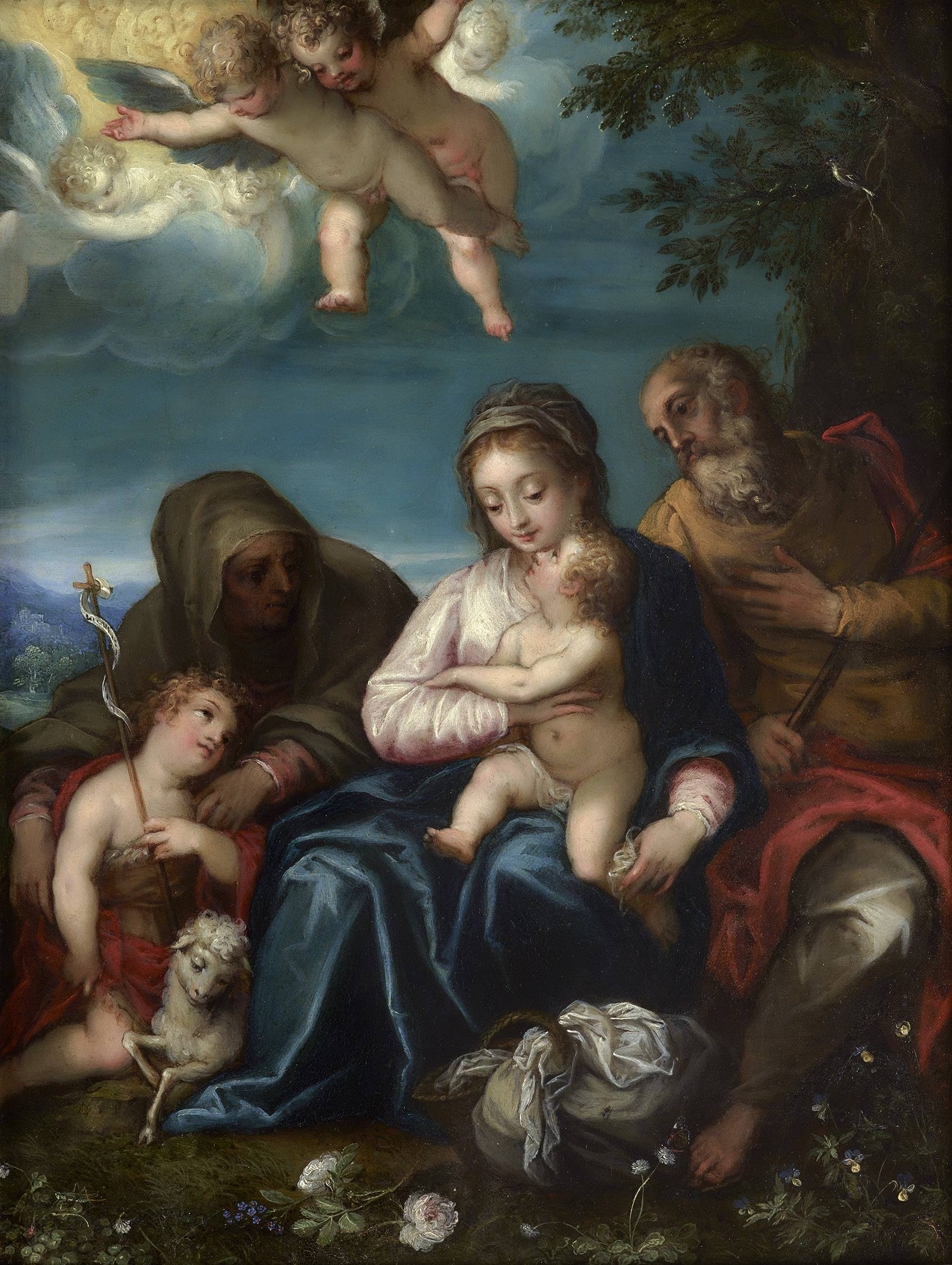 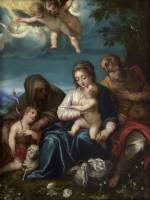 The Holy Family with St. Elizabeth and the Infant St. John the Baptist

in collaboration with JAN BRUEGHEL the Elder (Brussels 1568-1625 Antwerp)

This painting is accompanied by a certificate from Dr. Klaus Ertz, Lingen, 20 April 2002.

This impeccably preserved painting is a superb example of the small-format cabinet paintings produced by northern artists working in Rome in the last decade of the sixteenth century.  The painting depicts the Holy Family in a landscape.  The Virgin Mary, dressed in blue, is seated with the Infant Jesus on her lap.  Joseph, wearing a yellow coat and red cloak, sits behind, his bearded head inclined towards the Christ child.  A small basket of belongings rests on the ground before them.  Kneeling on the left, in the protective embrace of his mother St. Elizabeth, is the Infant St. John the Baptist, clad in a tunic of animals and holding a reed cross and scroll, with a lamb by his side.  Two roses and a sprig of forget-me-nots are strewn on the ground before Mary.  Clover and wild pansies grow nearby.  A castle perched on a mountain top may be seen in the distance.  Joyful putti hover overhead.

Collaborations in which a staffage painter contributed figures to a landscape by another painter were common in Flemish art from the sixteenth century onwards.  Here, the graceful, Italianate figures are by the German painter Johann Rottenhammer, while the delicately rendered landscape is by Antwerp master Jan Brueghel the Elder (1568-1625).  A native of Munich, Rottenhammer travelled to Italy in 1589.  After a stay in Venice, he made his way to Rome around 1593-94, where he met Brueghel and the Flemish landscapist Paul Bril (1554-1626).  All three artists belonged to the circle of Cardinal Federico Borromeo, an erudite collector and important patron of northern artists.  According to Karel van Mander, in Rome Rottenhammer “did paintings on metal plates, in the same manner as the artists of the Netherlands do.  He did not paint as an ordinary painter, he made excellent compositions”(i).  During this period Rottenhammer began to collaborate with both Brueghel and Bril, providing figures for their landscape compositions.  These joint ventures are confirmed by the frequent references to the German artist in the correspondence between Brueghel and Cardinal Borromeo and are also mentioned by Rottenhammer’s biographer Carlo Ridolfi (ii).  Apparently their teamwork continued even after 1596, by which time Brueghel had returned to Antwerp and Rottenhammer had settled in Venice.  Such long-distance collaborations were made possible thanks largely to the practice of painting on small copper plates which were both robust and easy to transport.

A product of the fruitful period when Rottenhammer and Brueghel were both working in Rome, this small panel demonstrates the complementary talents of the two young painters.  The elegant Mannerist figures, smooth brushwork and palette of strong primary colours of Rottenhammer are clearly distinguishable from the minutely detailed manner and the keen observation of natural forms of his Antwerp colleague.  Nevertheless, the two hands are skilfully integrated into a unified and harmonious composition.  A careful examination of the picture reveals that the figures were not added to the landscape, as one might expect, rather the other way around, the landscape was completed after the figures, as may be seen in the foreground where some of the flowers are painted over the figures’ clothing.  According to Carlo Ridolfi, Rottenhammer observed a similar practice in his collaborations with Bril, commenting that “A number of gentlemen had him [Rottenhammer] make figures on copper [and] then sent them to Bril in Rome [who] supplied the landscape (iii).

There was evidently a strong demand for small-scale cabinet pictures of this type, van Mander noting, in 1604, that Rottenhammer’s small or medium-sized coppers of religious or mythological subjects were “… scattered to many countries and are in the possession of numerous collectors” (iv).  Indeed, the artists attracted the support of several important patrons, including the Emperor Rudolf II in Prague and the Gonzagas in Mantua.  The precious nature of such works was enhanced by the use of a copper support.  The smooth, reflective surface of the metal lent itself to the meticulous rendering of detail and gave an added brilliance to the colours.

This previously unpublished painting would appear to be the prime version of a composition previously known from a slightly larger painting on copper in the Alte Pinakothek, in Munich (v).  Although the figures in the Munich version follow very closely the present composition, they are not of the same quality, nor is the more broadly painted landscape, which, judging from a photograph, is probably by Rottenhammer himself.  The subject is closely related to several other representations of the Holy Family in a Landscape and The Rest on the Flight into Egypt painted by Rottenhammer and Brueghel around the same time.  A very similar grouping of figures appears in a more expansive depiction of The Rest on the Flight into Egypt, dating from a few years later, also in Munich (vi).

According to tradition, Johann (also known as Hans) Rottenhammer was born in Munich after 1564, where his father was an equerry at the court of Duke William V.  He received his training from Hans Donauer, the court painter, before making the customary trip to Italy in 1588.  The documentary evidence indicates that he was in Treviso in 1589 and in Venice by 1591.  In 1593 or 1594, he went to Rome, where he lived for about a year and a half, before returning to Venice in September 1595 (vii).  In 1596, he married a Venetian woman, Elisabetta da Fabris.  Rottenhammer’s reputation in Venice must have been considerable, for already in the early 1600s prints after his compositions were being engraved by the likes of Lucas Kilian (1579-1637) and Raphael Sadeler I (1560/61-c. 1628).  His paintings – mostly cabinet pictures on copper – were collected by the grandest families, including the Gonzaga of Mantua and the Emperor Rudolf II.  Towards the end of his stay in Venice, Rottenhammer received a prestigious commission for an altarpiece of the Annunciation (in sitú) for the German church of S. Bartolomeo al Rialto, to replace Dürer’s Virgin of the Rose Garlands, which Rudolf had acquired for his own collection in Prague.  In 1606, Rottenhammer returned to Augsburg, where he immediately received major commissions, mostly for large-scale altarpieces and decorative schemes.  He remained in Augsburg for the rest of his life, but despite his reputation and popularity, ran up huge debts, chiefly owing to over-indulgence in drink.  He died in poverty in 1625.  His sons Hans Rottenhammer II (fl. 1622; d. 1668) and Domenikus Rottenhammer (fl. 1622) also became painters, but very little of their work survives.

Born in Brussels in 1568, Jan was the second son of Pieter Bruegel the Elder (1520/25-1569) and Maeycken Coecke van Aelst.  His father died shortly after his birth and it is said that his earliest artistic training was with his maternal grandmother, Mayken Verhulst, a miniaturist and watercolour painter.  According to the biographer and art theorist Karel van Mander, he was taught to paint in oils by Pieter Goetkindt (d. 1583) in Antwerp.  Brueghel left for Italy in 1589, stopping first in Cologne before arriving in Naples by 1590.  Between 1592 and 1594 he lived in Rome and enjoyed the patronage of Cardinal Ascanio Colonna.  From 1595 until his return to Antwerp in October 1596, Brueghel was in Milan at the invitation of Cardinal Federico Borromeo, who became one of the artist’s most important patrons and with whom he conducted an extensive correspondence for the rest of his life.

On his return to Antwerp, he joined the St. Luke’s Guild.  In 1601 he became a citizen and in 1602 was the Dean of the guild.  He married Isabella de Jode in 1599 and in 1601 their first son, Jan Brueghel the Younger, was born.  His wife died suddenly in 1603, perhaps at the birth of their daughter, Paschasia, who later married the artist Jan van Kessel (1626-1679).  In 1604, Jan Brueghel the Elder travelled to Prague returning to Antwerp later that year.  The following year he married Catharina van Marienberghe who bore him eight children.  In 1606 he was in Nuremburg and in the same year he was appointed court painter to the Archdukes Albert and Isabella in Brussels, a position he held until his death.  Around 1613, he accompanied Rubens (1577-1640) and Hendrick van Balen (1575-1632) on a diplomatic mission to the Northern Netherlands where they met Hendrick Goltzius (1558-1617) and other Haarlem artists.  In 1625 Jan Brueghel died from cholera during an epidemic which also claimed the lives of three of his children.