Sailors unloading Cargo from a Sailing Vessel at Sunset

Born around 1630 in the flourishing seaport of Rotterdam, Lieve Verschuier belonged to a family of painters and ships’ sculptors and carvers.  Like his father Pieter Verschuier, he was employed as a sculptor by the Rotterdam Admiralty, producing decorative elements for ships.  Thus, painting only constituted one of his activities.  As a consequence, his painted oeuvre is small.  Of his carved and sculpted work none survives.

Verschuier nevertheless developed into an accomplished marine painter, whose work has a strongly personal character.  His repertoire of subjects includes historical events, shipping in harbours, estuaries and coastal waters, and a few paintings of the whaling industry.  He also painted views of southern seacoasts at sunset or by moonlight for which he is best known.

Very little is known about Verchuier’s artistic training.  It is thought that he studied for a while with the marine painter Simon de Vlieger in his studio near Amsterdam.  He then apparently made a trip to Italy, where it is assumed that he saw and took inspiration from the sunlit harbour scenes of Claude Lorrain.  Whatever the case, his compositions combine elements from the marine paintings of such Amsterdam painters as de Vlieger and Reinier Nooms (called Zeeman), with Italianate lighting effects.

This painting exemplifies Verschuier’s southern coastal scenes.  A ship rests at anchor in a rocky bay, while another lies stranded on the beach. Sailors are at work unloading cargo from the grounded vessel onto a cart drawn by oxen.  Two rowing boats are drawn up to the shore: one is laden with barrels covered by a brick-red tarpaulin, in the other, three men take their ease.  The whole scene is infused with light from the setting sun.  Its rays colour the magnificent cloud-filled sky and cast a ribbon of light across the water.  The figures and boats in the foreground, lit contre-jour, are cast in shade.  These strikingly unusual effects of light and colour are a distinguishing feature of the artist’s work.

It is almost impossible to date the present work as only one dated picture by the artist is known (I).

Lieve Pietersz. Verschuier was born in Rotterdam around 1630.  His father Pieter Verschuier was a sculptor and carver who worked for the Rotterdam Admiralty.  One of his brothers, Aelbert, also became a painter and another, Cornelis, trained as a woodcarver.  A document records Verschuier’s presence in Amsterdam in 1652, during which time he may have been a student in the workshop of the marine painter Simon de Vlieger in Weesp.  According to the biographer Arnold Houbraken, Verschuier travelled to Italy in the company of the Utrecht painter Johannes van der Meer (c. 1640-after 1692).  This journey would probably have taken place in about 1655.  By 1656, Verschuier had returned to Rotterdam, where his marriage to Catharina Aksershoeck in Hillegersberg is recorded on 24 September of that year.  Various documents describe him as a “sculptor and burgher”.  On 25 October 1674 he signed a contract to work as a “sculptor and painter” at the Admiralty dockyard for a daily wage of 36 stuivers.  In the same year, he was appointed dean of the sculptors’ and stonemasons’ chapter of the guild of St. Luke.  He died in Rotterdam and was buried in the French church on 17 December 1686ii.

i Ships at a Pier, signed and dated 1661, Munich, Bayerische Staatsgemälde-sammlungen.
ii For a more detailed biography and the documentary references see: Jeroen Giltaij and Jan Kelch, Praise of Ships and the Sea: The Dutch Marine Painters of the 17th century, Rotterdam & Berlin, 1997, p. 361. 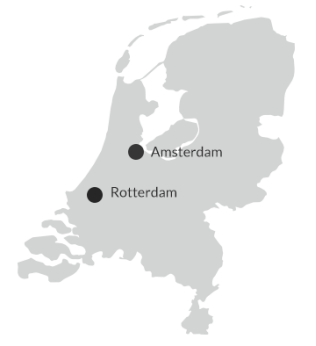