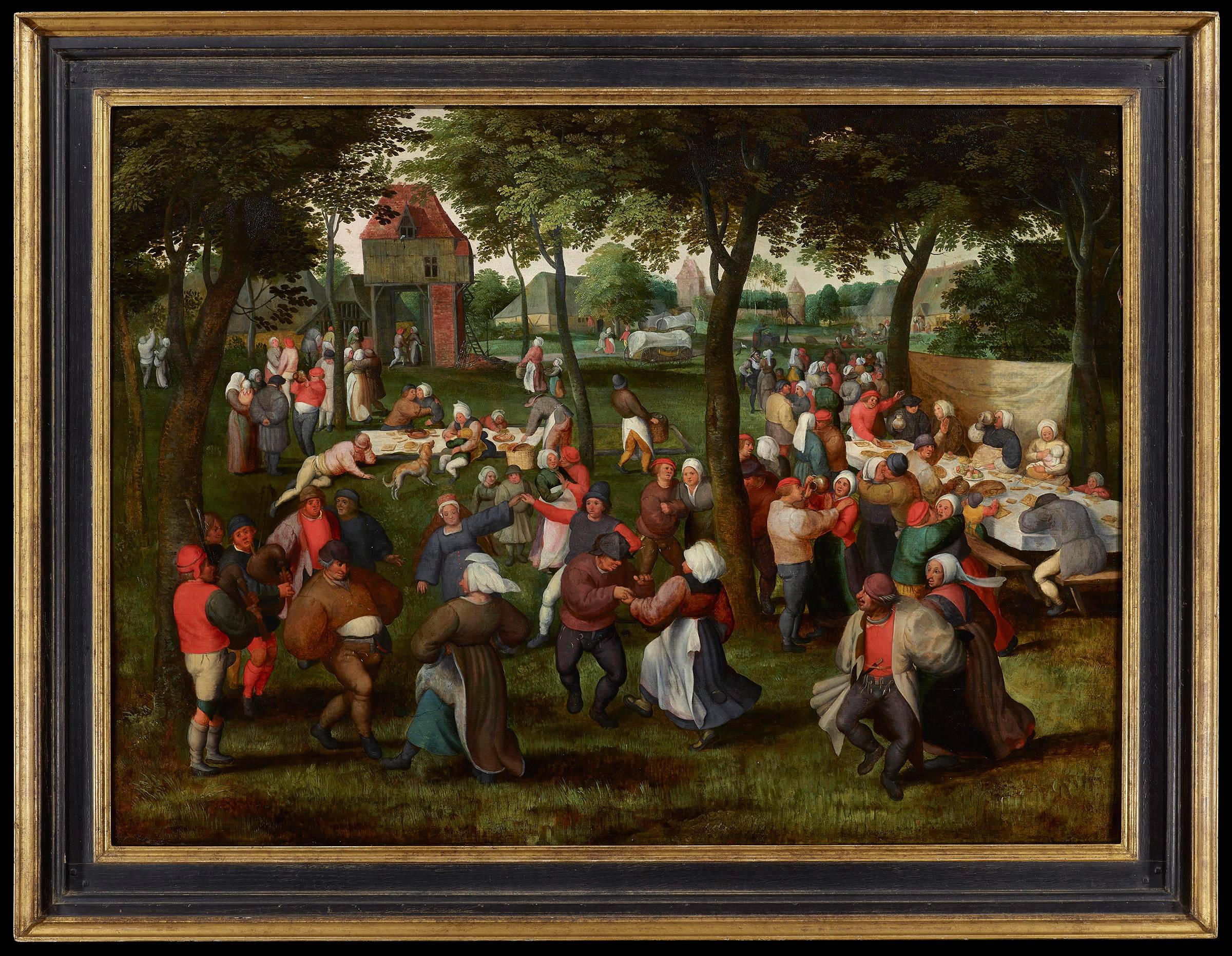 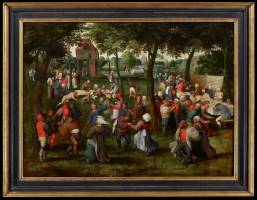 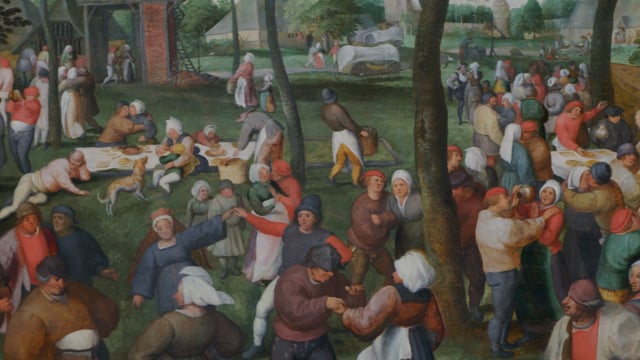 A Wedding Dance in the Outdoors

Sold to a private collector in Switzerland
Provenance

PROVENANCE:
Private collection, Italy, for at least 80 years, until 2016

Considered a follower of Pieter Bruegel the Elder (c. 1527/30-1569), Marten van Cleve reveals all his inventiveness in this wedding celebration.  While the theme is indeed borrowed from the pictorial production of the Brueghel family, the painting’s style and originality shows an independent and innovative artist.  Van Cleve was undoubtedly influenced by the peasant life inherent in Bruegel’s paintings, but his composition is unique in its rendering of one of the most widespread subjects of the era.

Just like Bruegel, Marten van Cleve found the subjects for his paintings in scenes of daily life, especially peasant feasts and celebrations.  Peasant weddings were a favourite subject which he portrayed in numerous panels.  The version presented here draws direct inspiration from two sources.  First of all, a wedding scene painting by Pieter Bruegel the Elder, dated 1566, in the Detroit Institute of Arts (I).  Secondly, an engraving by Pieter van der Heyden based on a drawing by Pieter Bruegel the Elder (ii).  Van Cleeve copies the position of the three couples dancing in the foreground.  The couple composed of the bride and groom is just behind and is also taken from the painting in Detroit.

Contrary to numerous small-size paintings portraying this subject, this work appears to be an exception to Marten van Cleve’s body of work.  Here he offers a far more spacious and airy scene.  He proves his artistic prowess by succeeding in making the married couple the focal point of the celebratory dance.  In any case, they certainly are not overshadowed by the couple dancing in the foreground.  Through the position of the bride and grooms’ arms, van Cleve invites us to enjoy the rest of the scene.  The painter homogenously deploys the guest in an effort to harmoniously integrate them into the landscape that fills the background.  His focus on the landscape and its details significantly differentiates him from the Bruegel’s.  With extraordinary mastery, he manages to create a completely balanced composition in technical and iconographic terms.  His fluid brushstrokes and the style of the figures, in particular their features and the way they are dressed, further emphasises this difference.  Moreover, the dark contours so characteristic of Bruegel do not appear in van Cleve’s work.  The cleverly applied colours make this painting a unique work in the artist’s oeuvre.

Marten van Cleve is an exceptional artist, as seen through his use of colour, his artistry and the texture and aesthetics of his landscapes.  Painted on planks of wood, dated circa 1559, a recent analysis shows that this work was executed around 1570.  It is also similar to two other versions: one that has been in a private collection in Brussels since 1969, and another, whose current whereabouts is unknown, but which was with the art dealer Houthakker in 1934.

The son of Willem van Cleve the Elder, Marten van Cleve the Elder was probably born in Antwerp around 1527.  His date of birth is derived from a document of 2 April 1567 in which he declared his age to be 40.  His brothers Hendrik III and Willem II van Cleve also became painters.  Marten was very likely trained by his father, before enrolling as a master in the Antwerp Guild of St. Luke in 1551-52.  According to Karel van Mander, he subsequently followed his brother Hendrik III into the studio of Frans Floris (1519/20-1570): this would probably have occurred around 1552 to 1553.  On 7 January 1556, he married Maria de Greve, and apparently set up his own studio around the same time.  The guild records show that he took on five apprentices between 1558 and 1575.  His own sons Gillis, Marten II, Joris and Nicolaes also probably worked in the studio.  Van Mander’s statement that the artist collaborated with a number of landscape painters, including his brother Hendrik III, Gillis van Coninxloo III, Gillis Mostaert and Jacob Grimmer, is confirmed by seventeenth-century inventories.  Marten died in 1581, at which time van Mander tells us he was suffering from gout and rheumatism.