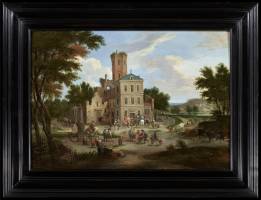 Townsfolk gathering on the Shore of an Estuary

To view the pair to this painting see: Townsfolk gathering outside a Public Buildings

This pendant pair of paintings depicts two imaginary scenes.  In one, a cluster of buildings - comprising a small chapel, a ruined castle and a grand country house in the classical taste – situated at the intersection of several roads, provides the setting for a lively scene of everyday life.  Whilst elegantly dressed members of the gentry gather before the house, herdsmen pass by with their cattle, and a group of peasants plays a game of skittles in the foreground. In the other, a variety of townsfolk appears on the shores of a river before a gateway leading to a walled garden and church.  Among those gathered are well-to-do citizens in fashionable attire, groups of soldiers, fishermen and travellers.

Schoevaerdts’s oeuvre consists mainly of picturesque views of villages, towns, ports and Italianate scenes, crowded with animated little figures and animals.  These belong to a landscape tradition initiated by Jan Brueghel the Elder in the first decades of the seventeenth century.  Such was the taste and public demand for small, decorative landscapes of this kind that the tradition remained alive for a long time.  Profiting from this demand, painters both in Antwerp and in Brussels continued working in an archaic style well into the eighteenth century.  Most of the subjects treated by Jan Brueghel remained popular during this period, only mythologies and allegories were gradually dropped from the repertoire.  Although to some extent the early seventeenth-century style was modified by current artistic trends, the essential features of the landscape type conceived by Jan “Velvet” Brueghel remained true to its origins.

This pair of small panels is characteristic of Schoevaerdts’s finely-painted colourful scenes, filled with anecdotal details.  As we see here, prominence is often given to architectural motifs, a trait which distinguishes him from his master Adriaen-Frans Baudewijns (1644-1711).  In most other respects his style is very similar, indeed, his work is often confused with that of Baudewijns and his oft-times collaborator Pieter Bout (1658-1719).  Also typical of Schoevaerdts is the harmonious palette of blues and greens with vivid accents of red, yellow and blue in the figures’ clothing.

Very little is known about the life of Matthijs Schoevaerdts.  It is assumed that he was born in Brussels around 1665, since he was apprenticed to Adriaen-Frans Baudewijns in 1682.  He was admitted to the Brussels Guild of St. Luke as a Master on 28 September 1690 and served as dean of the guild from 1692 to 1696.  Since his latest works are dated 1702, one can conclude that he died sometime after that date.  A document from 1712 states that he was dead by then.  His brother Frans and his nephew Pieter were also painters.