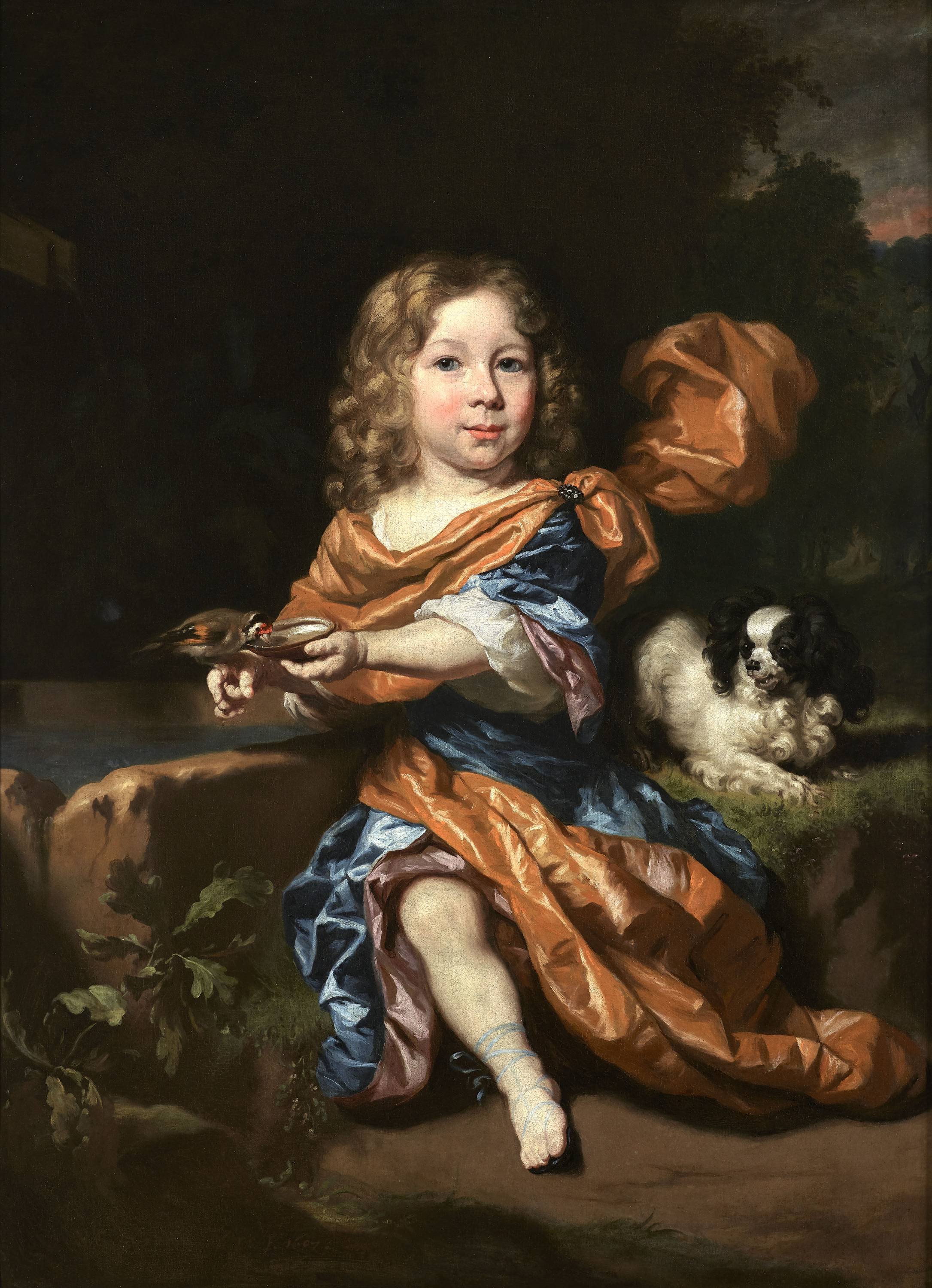 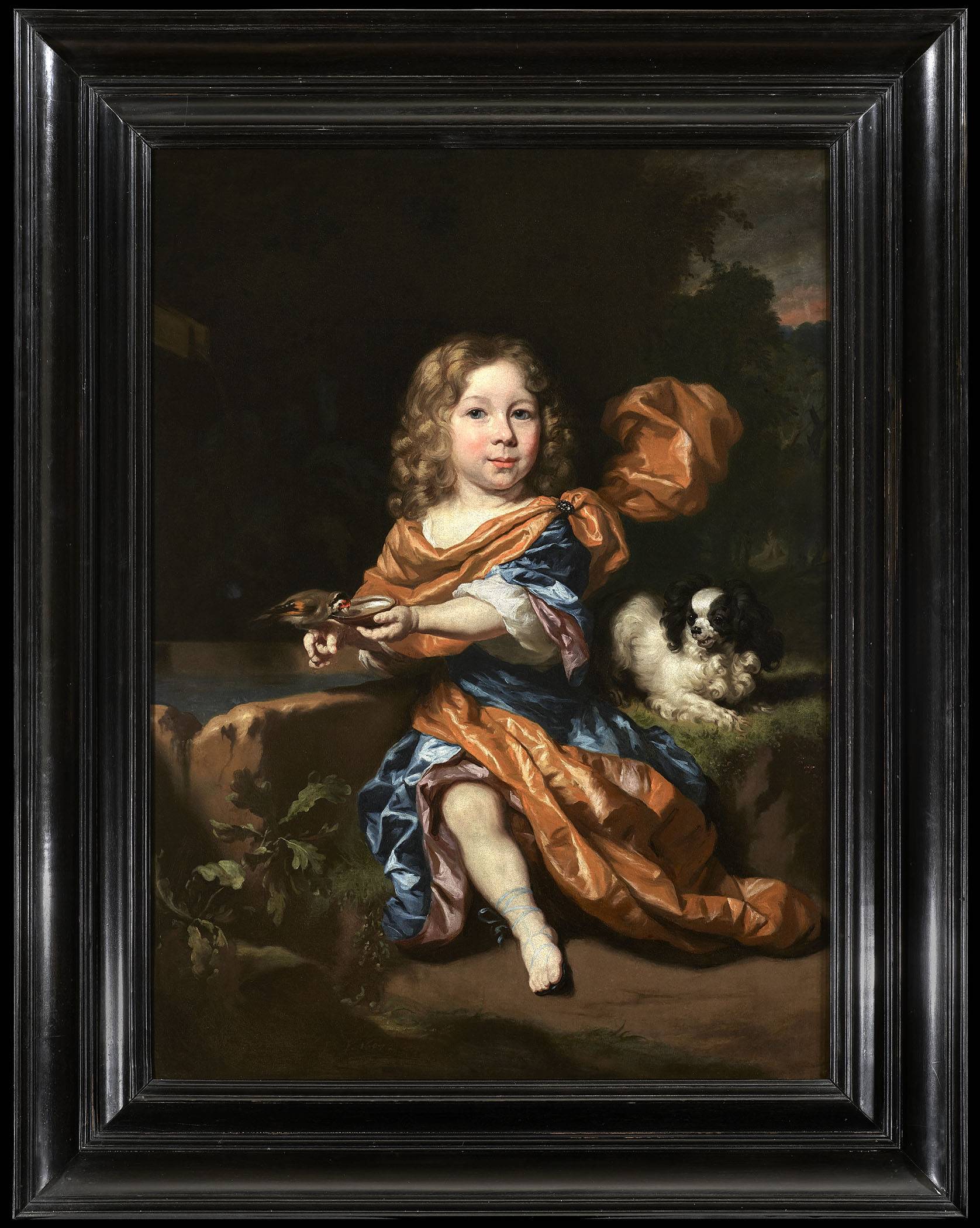 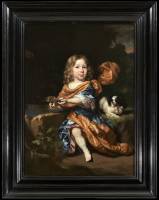 A Portrait of a 27-month-old Boy

In this attractive portrait, a blue-eyed, curly-haired boy is portrayed full length in a wooded landscape.  He is seated on a grassy bank by a stone tank filled with water.  A goldfinch, perched on his right index finger, drinks from an abalone shell held in his other hand.  Turning his head away from the tame bird, the youngster fixes the viewer in a steady gaze.  A small black and white dog crouches beside him in a playful attitude.  The child is dressed à l’antique in a loosely draped garment comprised of shimmering pink, blue and orange silks, pinned at the shoulder with a brooch.  On his feet he wears Roman-style laced sandals.  Although we do not know the identity of the sitter, according to the inscription on the painting, he was twenty-seven months old at the time he was painted.

After training with Rembrandt in Amsterdam, Nicolaes Maes returned to his native Dordrecht in 1653 and set up as an independent master.  At first, he painted mainly biblical subjects and domestic genre scenes in a Rembrandtesque manner, but from 1659 onwards he increasingly turned his attentions to the more lucrative field of portraiture.  Initially, his portraits were conservative in style, but he gradually developed a more elegant and colourful manner, inspired by fashionable Flemish and French models.  In 1673, Maes moved to Amsterdam, where he soon became the most sought after portraitist in the city.  According to Houbraken, “so much work came his way that it was deemed a favour if one person was granted the opportunity to sit for his portrait before another, and so it remained for the rest of his life”(i).

With its vibrant colours, lively pose, and pastoral atmosphere, this likeness of a young boy exemplifies the fashionable and elegant portrait style of Maes’s later career.  Judging from the number of surviving children’s portraits, Maes enjoyed a great success with this genre.  The youngsters in his paintings are invariably portrayed outdoors, often in the company of tame animals and birds.  The loosely draped costumes in which they appear do not reflect the actual fashions in children’s clothing, but are fanciful creations, usually with elements of classical or pastoral dress, intended to give the portrait a timeless appeal.   This mode of portrait dress was derived from Sir Anthony Van Dyck, but it became enormously popular with Dutch portraitists in the second half of the seventeenth century, for it had the virtue not only of endowing a sitter with a courtly elegance, but was also less time-consuming for the painter to execute than the intricate lace accessories of the day.

The bird and the dog with which the child is depicted would have been chosen not only because they enliven the portrait and give it a playful air, but also because they have a symbolic significance.  Owing to their ability to learn, both the well-behaved dog and the tame goldfinch represent the idea of good upbringing, and as attributes of the boy serve to highlight his virtuous behaviour.   Similar attributes appear in many of Maes’s portraits of children, for example the little dog depicted here which is of the papillon breed, also appears in an almost identical pose in Maes’s hePortrait of Maria van Alphen, as well as in his Portrait of Three Children, in Zuylen Castle, Oud-Zullen (ii).

The son of Gerrit Maes, a prosperous silk merchant and soap manufacturer in Dordrecht, and his wife Ida Herman Claesdr., Nicolaes Maes was baptised in the Dutch Reformed Church in Dordrecht in January 1624.   According to the artist’s eighteenth-century biographer Arnold Houbraken, as a teenager he learnt drawing with ‘an ordinary master’ in his hometown, before becoming a pupil of Rembrandt in Amsterdam.  His period of tuition in Rembrandt’s studio probably took place between about 1646/48 and 1650/52. It is not known precisely when Maes returned to Dordrecht, but he announced his intended marriage to the widow Adriana Brouwers there on 28 December 1653.  The ceremony took place in the Reformed Church in Dordrecht on 13 January 1654.  The couple had four children: a son named Conradus (born 1654), who died very young, and three daughters, Johanna (born 1656), Arnoldina (born 1660) and Ida (born 1664).  Adriana already had a son, Justus de Gelder (1650-after 1707), from her first marriage to the preacher Arnoldus de Gelder.

In 1658, Maes bought a property in Steegoversloot in Dordrecht from the shipmaster Job Jansz. Cuyter for 2,650 guilders together with a group portrait of the Cuyter family (iii).  Judging from the annual sum paid by Maes in city taxes, he was reasonably successful in Dordrecht.  On 30 June 1672, he still owed 1600 guilders for the purchase of a second house, next to his own in Steegoversloot, a debt that was finally settled in 1677.  In January 1673, Maes was listed as lieutenant in the sixth company of the Dordrecht civic guard, but by December that year he had moved with his family to Amsterdam.  Nicolaes remained there for the rest of his life, becoming a member of the Amsterdam Guild of St. Luke in 1688.  However, he retained his properties in Dordrecht and rented them out.  In 1678, it appears that he had acquired another house in Dordrecht in Hooge Nieuwstraat.  He eventually sold one of the houses in Steegoversloot in 1692.  His wife Adriana was buried in the Oude Kerk in Amsterdam on 14 March 1690.  Nicolaes died three years later, aged fifty-nine, and was buried in the same church on 24 December 1693.  According to Houbraken, he had been plagued by gout in his later years, but died a reasonably prosperous man.  His children inherited more than 11,000 guilders and a clutch of properties in Amsterdam and Dordrecht.