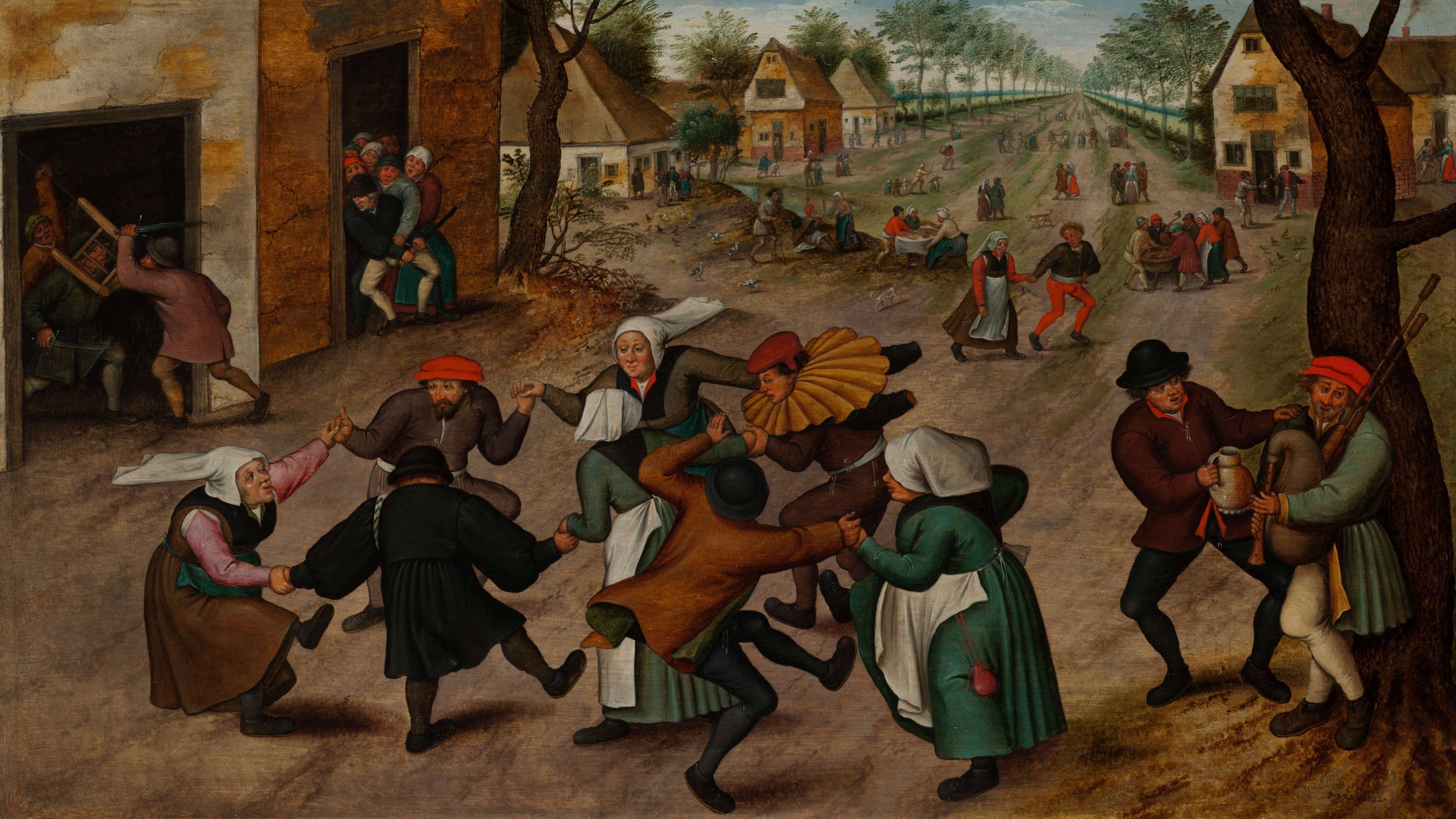 A Village Street with Peasants dancing

Sold to a private collector in the USA
Provenance

Essay
A Village Street with Peasants dancing is an original composition by Pieter Brueghel the Younger.  Unlike many of his paintings, it is not derived directly from a work by Pieter Bruegel the Elder and is known only in this one example.  With its monumental dancing figures and characteristically bold, colourful style, it is one of Pieter Brueghel the Younger’s most successful inventions.  The painting dates from the later part of his career.

A Flemish village is the setting for Brueghel’s rustic scene.  A group of high-spirited peasants takes centre stage: they dance to the strains of a bagpiper, who stands beneath a tree.  Three of the couples have joined hands and dance in a circle, kicking up their feet in time to the music: their energetic movements and heavy, swinging garments convey a sense of motion.  In the background, a cluster of village houses gives way to a tree-lined avenue that recedes deep into the flat Flemish countryside.  A village festival of some kind is evidently under way, for besides the dancing, the village is filled with people enjoying a day out: some are drinking and feasting at tables outdoors, while others stroll about, or stand in groups gossiping.  Also visible are some children playing with a man dressed as a fool, a beggar asking for alms, and a pair of sweethearts stepping out together hand-in-hand.  For the most part the atmosphere is convivial and relaxed, but over on the left a fight has broken out between two men.  A third man tries to join the fray, but is restrained by his neighbours.

The early life of Pieter Brueghel the Younger was dominated by the genius of his father.  Pieter the Elder died prematurely in 1569 - “snatched away from us in the flower of his age” (i), as his great friend the geographer Abraham Ortelius relates - leaving his wife Mayken Coecke and two sons, Pieter the Younger, aged about four or five, and Jan, barely a year old.  The two youngsters could scarcely have known their father, yet both of them followed in his footsteps and became painters.  Pieter, we are told by Karel van Mander, studied with Gillis van Coninxloo in Antwerp (ii), while Jan was taught to the art of painting miniatures by his grandmother Mayken Verhulst.  Both had prolific careers.  Jan spent seven years in Italy, before settling in Antwerp, where he became a renowned painter of history subjects, landscapes and flower pieces in a style of his own that owed little to his father.  Pieter, by contrast, remained in Antwerp, where he set up a workshop and made a name for himself producing copies, versions and adaptations of his father’s works.

It was not until about 1619 that Pieter Brueghel the Younger began to find his own voice and develop a repertoire of his own compositions.  His inventions from this time focus mainly upon views of village and rural life, particularly peasant festivities. This late-flowering of his creativity is acknowledged in Anthony van Dyck’s famous Iconography (1630-31), which features a portrait of the artist together with the caption Antverpiae pictor ruralium prospectuum (Antwerp Painter of Rustic Landscapes).

As has already been mentioned, A Village Street with Peasants dancing is unique in Pieter Brueghel’s oeuvre.  It is nevertheless loosely related to several of his other late compositions.  These include depictions of The Swan Inn, a composition known in seven versions which shows a long village street with figures feasting before the village inn (iii).  Some of the figure groups in our painting can also be found in a versions of the much large Kermesse of Saint George, which is dated 1628 (iv).  These include the ring of dancing couples and the motifs of the fighting men seen behind them. The dancing group measures approximately the same in both paintings, which suggests that the design for it was likely to have been transferred by tracing, as was a common practice in Brueghel’s studio.  This theory is borne out by the underdrawing of the present picture, revealed by infra-red imaging (v).  The underdrawing of the central figure group appears to have been done in two stages.  The first is a characteristic outline which looks as if it were traced, while the second is freer as if working up the transferred design.  The underdrawing of the buildings, trees and subsidiary figures is looser still and for the most part seems to have been done freehand.  The close relationship between our painting and the Kermesse of 1628 suggests that our painting was also executed at around the same time.

The receding tree-lined avenue, which gives this composition such a powerful sense of depth, was also a device that Brueghel utilised on other occasions.  A similar broad avenue with trees on either side appears, for example, in an earlier, also unique composition of a village landscape with peasants feasting before an innvi, and in a large-scale depiction of The Return from the Fair (vii).

Surprisingly few details survive regarding the life of Pieter Breughel the Younger. Even his date of birth, probably in Brussels, is not known, although two documents which state that he was thirty-six on 22 May 1601 and seventy-two on 10 October 1636 suggest he was born in 1564 or 1565.  He was the son of the celebrated peasant and landscape painter Pieter Bruegel the Elder, and the older brother of Jan Brueghel the Elder.  He was therefore only about five years old when his father died prematurely in 1569 and was an adolescent when his mother, Maria Coecke, daughter of the artist and publisher Pieter Coecke van Aelst (1502-1550) passed away nine years later.  He may have received his first training from his maternal grandmother, Mayken Verhulst, who was a painter and had been married to Pieter Coecke van Aelst.  He lived in Brussels until 1583, when he moved to Antwerp, where he may have become an apprentice to the landscapist Gillis van Coninxloo, as Karel van Mander claimed (viii).  In 1584-85, Pieter the Younger registered as a vrymeestersson (‘free master’s son’) in the Antwerp painters’ Guild.  In 1588, he married Elizabeth Goddelet, who bore him seven children, all of whom were baptised in the Sint-Andrieskerk in Antwerp between 1589 and 1597.  Nine pupils are listed as having been trained in his workshop between 1588 and 1626, among them Frans Snyders and Gonzales Coques.  His eldest son, Pieter III, who also became a painter, probably trained with his father before registering in the Guild of St. Luke in 1608.  Although he enjoyed a long and productive career that lasted more than half a century and exported his works widely through the firm of Forchoudt, he seems never to have owned a house and, in 1597, was behind with his rent.  He died in Antwerp in 1637 or 1638.