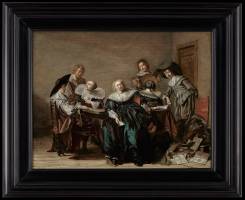 Art Market, Berlin, circa 1928
Arno Siegfeld (1884-1951), Berlin
Confiscated at the Philippins & Co., storage depot, Amsterdam, by the German authorities following the occupation of The Netherlands
Van Marle & Bignell, The Hague, 27 January 1942, lot 15 (4,200 guilders), where acquired by
Van Wieringen, The Hague (possibly via H. A. J. Stenger, The Hague)
Acquired by the husband of the previous owner in Austria in the 1950s
The present work is now back on the market following a settlement agreement between the previous owner and the heirs of Arno Siegfeld.

The Amsterdam painter Pieter Codde specialised in guardroom and merry company scenes, the latter featuring modishly attired young men and women, enjoying music, drinking, gaming and sometimes even dancing.  As well as scenes of contemporary life, he painted portraits and a small number of history paintings.  With the exception of his contributions to Frans Hals’s large unfinished, life-size group portrait of one of Amsterdam’s civic guard companies, known as The Meagre Company, Codde produced cabinet-sized paintings with small-scale figures.

In this characteristic work of 1636, Codde has depicted a sparsely furnished interior, with a company of elegantly dressed young men and women gathered round a table, amusing themselves with music, conversation, and cards.   On the far side of the table, a lute-player accompanies a young lady who sings from a songbook.  At the opposite corner, three young people are playing cards for money: one of the young ladies is conferring with a gentleman standing at her side, while the other, dressed in blue, has swung round to face the viewer and shows us the ace of clubs in her hand.  Her right foot rests on a foot-stove.  The seventh member of the company, a nonchalantly posed young man, wearing a grey doublet, breeches and slouch hat, stands somewhat apart from the others, apparently lost in his own thoughts.    Still-life elements – a lute and a quantity of books and pamphlets - are heaped carelessly on the floor in the right-hand corner.

Merry company scenes (geselschapjes), as they were known, emerged as a new subject in painting in the early seventeenth century.  The genre had its origins in the outdoor scenes of young people enjoying themselves in gardens and on terraces (buitenpartijs) painted by Esaias van de Velde (c. 1590-1630) and David Vinckboons (1576-c. 1632) in the second decade of the century.  Around 1620, the Rotterdam artist Willem Buytewech (1591/2-1624), who also worked in Haarlem for a while, broke new ground when he started painting parties of merrymakers indoors.  Although he only painted a handful of pictures of this type, he set a  trend that became enormously popular with genre painters throughout the 1620s and 1630s.  Among the leading exponents of this new genre were such painters as Dirck Hals (1591-1656) in Haarlem, Anthonie Palamedesz. (1601-1673) in Delft, and Pieter Codde and Willem Duyster (1598/99-1635) in Amsterdam.

Codde painted many variations on the merry company theme.  This well-preserved panel, painted when the artist was at the height of his powers, is a particularly good example.  The refined manner of painting and tonal palette of silvery greys, browns and blue is typical of this time in his career.  In contrast to the bare interior, the artist has lavished great care on the details of the figures’ modish clothing – the lustrous fabrics, the lace collars and cuffs, the buttons and bows, and the slashed sleeves – and has rendered their hands and faces with the utmost delicacy.  He has also applied his fine brush to the description of the wood-grain in the floor boards, the cracks in the plasterwork round the door, and the leather bindings and tattered pages of the books on the floor.   The young people in our painting are all dressed in the height of fashion for the mid-1630s. The women wear voluminous, high-waisted dresses, with full sleeves and broad lace-trimmed collars, while the men are clad in matching doublets and breeches, with slashed sleeves and flat lace collars, or falling ruffs, and wide-brimmed hats.

Card games were a popular theme in Dutch seventeenth-century art, but interpretations of such scenes varied.  Some representations of card players emphasise the idleness of the pastime, or the stupidity or untrustworthiness of the participants.  In others, games of cards provide the scenario for an amorous dalliance between the sexes.  The artist’s intention here is not entirely clear, but the latter interpretation seems more likely on account of the painting’s generally light-hearted mood and the cultivated and restrained behaviour of the participants.  Nowhere are there signs of the drunkenness – indeed no alcohol is being consumed – or debauchery so often associated with scenes of card-playing and gambling.   On the contrary, the gentle strumming of the lute-player sets an altogether different tone, and the central figure, with her confident gaze and trump card held firmly in her hand, seems to suggest that she has got lucky in love as well as in cards.   On the other hand, although the scene focuses mainly on civilised enough amusements, Codde has taken care to provide a moment of reflection, for the still life of old, thumbed books and musical instruments which occupies the right-hand corner of the composition, carries an unmistakably vanitas message, warning the viewer that all such earthly pleasures are transient.

Pieter Jacobsz. Codde was baptised in Amsterdam on 11 December 1599.  He was the fourth of nine children born to Maria Jansdr. and Jacob Pietersz. Codde, a minor government official.    Nothing is known of Codde’s early life or training, but he is first described as a painter, aged twenty-three, in a deed of 27 October 1623 announcing his intended marriage to the eighteen-year-old Marritge Aerents.  The couple were married on 24 April 1624 : a daughter, Clara, was baptised in the Oude Kerk six months later, but she died in August 1635.    Codde lived in the Anthoniebreestraat (now the Jodenbreestraat) from around 1628 until at least 1650-53.    During the late 1620s and early 1630s, the artist seems to have moved in literary as well as artistic circles in Amsterdam: in 1627, the playwright Elias Herckmans dedicated his tragedy Tyrus to “Pieter Codde, artist-painter in Amsterdam”, and in 1633 the artist’s own pastoral love poem was published in the Hollands Nachtegaelken.

The artist got himself into trouble on more than one occasion.  In 1625 he attacked the genre painter Willem Cornelisz. Duyster (1598/99-1635) during a quarrel, and, in 1636, he was accused of raping his 22-year-old maidservant, for which he and the maid were locked up in Amsterdam Town Hall.  In the same year, he separated from his wife, who had had an affair with the painter Pieter Potter (1597/1600-1652) that led to the drawing up of an inventory of their possessions on 5 February 1636, which included paintings by Frans Hals, Jan van Goyen, Salomon van Ruysdael, Jan de Heem and Adriaen Brouwer.

Codde had apparently gained a reputation as a portraitist by 1637 when he was commissioned to complete the large civic guard painting, commonly known as the Meagre Company (i), which had been begun by Frans Hals four years earlier but left unfinished.  Although Codde rarely dated his works after 1645, he continued to paint and remained active in artistic circles in Amsterdam throughout the 1650s.    He apparently prospered, for on 7 January 1657 he was able to buy a house at 385 Keizersgracht together with the two buildings behind it for a total of 5000 guilders, where he lived until his death.   In 1672, he was one of the artists consulted by the art dealer Gerrit Uylenburgh to value a group of Italian paintings.  Codde made his will on 12 October 1669, and died nine years later, aged around seventy-eight.  He was buried beside his sister Elizabeth in the Oude Kerk on 12 October 1678.