Keep me updated about Willem Bartsius:

An Allegory of Avarice

We are grateful to Dr. Fred G. Meijer for endorsing the attribution on the basis of a photograph, dating the work to the first half of the 1630s.

An old woman in a fur-trimmed cape and gold-embroidered head-scarf is seated before a table weighing gold.  A money bag sits in her lap, while a second rests on the table, together with a pile of gold and silver coins, gold chains, a pocket watch and a box of weights.  A casket appears at the back of the table.  Captured in a moment of deep concentration, she weighs a gold coin, using a balance held in her poised right hand, while carefully selecting a weight from the box on the table before her.  The artist has paid close attention to the modelling of the old woman’s care-worn, wrinkled face and hands, as well as to the detailed description of the various fabrics of her clothing and the still-life elements.  The whole composition is rendered in a palette of greys, browns, russet, yellow and ochre.

This signed painting by the rare and enigmatic painter Willem Bartsius, which has recently surfaced in an old European aristocratic family collection, is a major addition to the artist’s small surviving oeuvre.  Very few biographical details on Bartsius have come down to us, but an article published in 2008 by the art historian Bernadette van Haute (i) unravelled some of the mysteries of his life and began the process of reconstructing his oeuvre.   Bartsius came from the provincial city of Enkhuizen, in the far north of the province of Holland, and had close ties to members of the Potter family, also natives of Enkhuizen, through the marriage of his sister, Aagje, to the painter Pieter Simonsz. Potter (c. 1599–1652), father of the famous animal painter Paulus Potter (1625–1654).   The name of his teacher is not documented, but it seems likely that he accompanied his much older brother-in-law Pieter Potter to Leiden in 1628 and was trained by him there, before settling in Amsterdam in the mid-1630s.  The painter’s move to Amsterdam was likely motivated by the promise of better financial prospects.

Although Bartsius is consistently described in the early art historical literature as a genre and portrait painter, his existing oeuvre consists primarily of history paintings – Old and New Testament scenes, themes from mythology and literature and allegories – and portraits and tronies.  Old inventories also mention landscapes, though none are known today.  In 2008, van Haute listed sixteen works by Bartsius, of which six bear dates between 1631 and 1638, plus another five works known only from descriptions in the literature: a further handful has turned up at auction since then.  The artist’s very small output, produced during a brief period of only eight years, can be largely explained by his premature death, while still in his twenties.

Whilst the circumstances of Bartsius’s training are not clear, the style and subject matter of his work situates him firmly within the circle of painters who came under Rembrandt’s sphere of influence, during the master’s final years in Leiden and his first years in Amsterdam.  For this reason, Werner Sumowski included Bartsius in his six-volume magnus opus on Rembrandt and his School (ii).  Like most of Rembrandt’s pupils and followers, Bartsius showed a marked preference for biblical, mythological and allegorical subjects, as well as for portraits and tronies.  Furthermore, he seems to have chosen subjects that were popular with artists in Rembrandt’s circle, including some very obscure ones that were rarely treated elsewhere.   Also noticeable is his obvious interest in the depiction of old men and women.  His work displays some of the same richness of detail and precise brush technique as the Leiden fijnschilders, or fine painters. Given their stylistic affinities, his pictures have occasionally been confused with those of Gerrit Dou (1613-1675), Willem de Poorter, (1608-1649/68), Jacob de Wet (c. 1610-before 1691), and others in Rembrandt’s circle.

In seventeenth-century art, the act of weighing gold was often associated with avarice or greed.  Thus, images of old men and women weighing gold were seen as allegories of avarice, one of the seven deadly sins.  The age of the person portrayed was significant as avarice was thought to increase with advancing years.  Allegories of avarice also invariably carried a Vanitas connotation, warning at both the transience of life and the ultimate futility of worldly wealth.  Here, the old lady’s preoccupation with her treasures and the pocket watch – a symbol of transience - placed unobtrusively amongst the gold coins and chains, underscore this meaning.

The tradition of painting tax collectors, money changers, moneylenders, and men and women weighing gold, had its origins in the work of the sixteenth-century Flemish painters Quinten Massys (1465/66-1530) and Marinus van Reymerswaele (c. 1490- before 1546).  The subject was introduced in the Northern Netherlands in the 1620s by the Utrecht painters Abraham Bloemaert (1566-1651) and Gerrit van Honthorst (1592-1656).  Honthorst’s Allegory of Avarice was very likely an important source for Rembrandt’s 1627 Parable of the Rich Man (Avarice), in Berlin (iii), which depicts a bespectacled old man examining a gold coin by candlelight, surrounded by moneybags and ledgers.  Subsequently, the subject was taken up by a number of painters in Rembrandt’s circle.

Very little is known about Willem Bartsius (who also spelt his name Bartius, Baldeus, Baltuis, Bardesius), although recent research has at least established some secure facts about his lifeiv.  He was baptised in Enkhuizen on 24th January 1612 (v) and came from a middle class family.  His parents, Paulus Pietersz. Bartsius, a pensionary of Enkhuizen, and Frederickje Meijnertsdr. Semeyns, were married in the Reformed Church in Enkhuizen on 31st March 1598.   His mother was a member of the wealthy Semeyns family and owned land and properties in the city.  However, by the time of her death in Amsterdam in 1635 she seems to have fallen on hard times.  The couple also had a son, Pieter, who was baptised on 23 February 1599 but probably died young, and a daughter, Aagje, who later married the landscape and figure painter Pieter Simonsz. Potter (c. 1599–1652), a native of Enkhuizen, and gave birth to the famous animal painter Paulus Potter (1625–1654).    Nothing is documented regarding Willem’s training as a painter, but it is likely that he was taught by his brother-in-law Pieter Potter, who was some twelve years his senior, probably in Leiden, where Pieter Potter settled in 1628.   The first indication of the artist’s activity is in 1633, when he reported to the Alkmaar Guild of St. Luke on 17 September 1633 to be registered as a member.  He was enrolled as a master in 1634 and the same year took a pupil, Abraham Meyndertsz.  His registration in the Alkmaar guild was likely prompted by a prestigious commission from the city of Alkmaar to paint a large group portrait of their militia company, The Officers and Standard Bearers of the Oude Schutterij of Alkmaar (vi), which bears the date 1634.  The awarding of such a commission to the young artist seems to imply that he had already established himself as an independent painter and made something of a name for himself.  In a notarial deed drawn up on 25th May 1636 at the request of Pieter Potter, Bartsius is mentioned as living in Amsterdam, although he had probably settled there at an earlier date.   His name appears for the last time in a document dated 11 April 1639, in connection once again with Pieter Potter and one of his enterprises, a gold leather factory and a shop, in which Bartsius apparently worked.  The artist’s last dated painting is from 1638.  After 1639, there is no trace of his name in any document and it has therefore been assumed he died in or shortly thereafter. 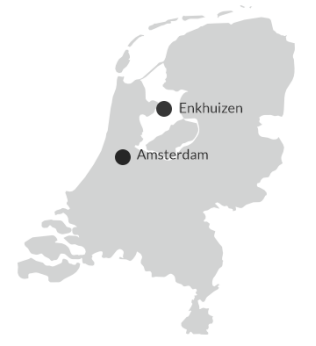 Keep me updated about Willem Bartsius: