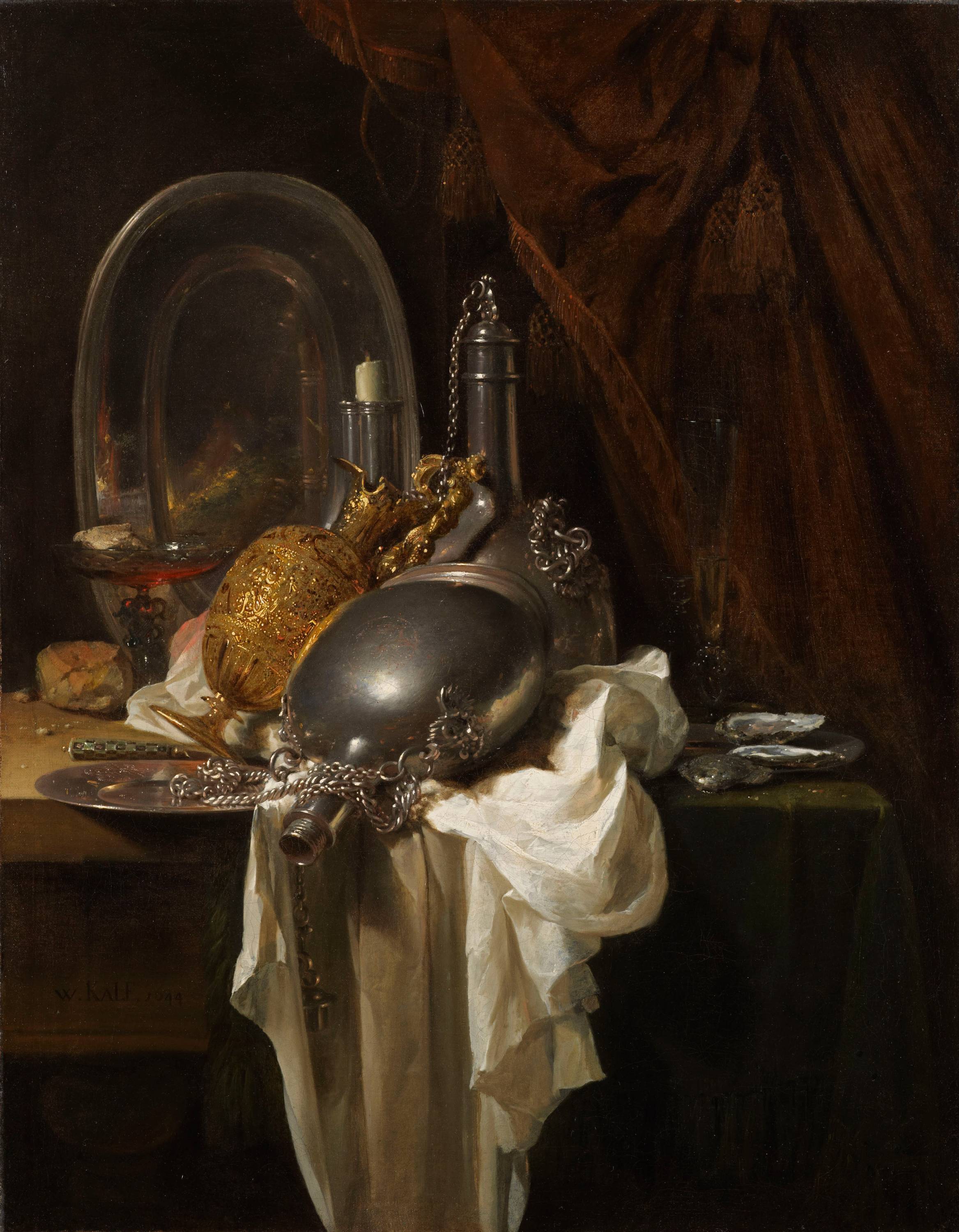 A Still Life with Silver, Pewter and Gilt Objects on a partly draped Table

Of all the still-life painters of the Dutch Golden Age, perhaps Willem Kalf enjoyed the greatest reputation.  In his lifetime his praises were sung by poets such as Joost van den Vondel and Jan Vos (i), and after his death his work was described in terms of admiration by Gerard de Lairesse (ii) and Arnold Houbraken (iii).

In this outstanding still life of 1644, Willem Kalf shows a table, partly covered with a green cloth, upon which appears an assemblage of ornamental objects.  A pewter pilgrim’s flask forms the centrepiece, flanked on one side by a richly crafted silver-gilt ewer, titled at an angle.  Behind it and to its right are a silver candlestick, a large pewter platter, a façon-de-Venise glass and a bread roll, while in front of it, lying on its side on a crumpled white napkin, is another flask, its stopper and chain dangling over the front edge of the table.  To its left are a pewter plate and a knife, with an inlaid handle, and on the right, some oysters and a tall flute glass.  A heavy curtain, with tasselled cords, is drawn up behind.  Light falling obliquely from the upper left is reflected in the finely wrought metal objects, which gleam and glitter in the dimly lit interior.  These effects are realised with a muted palette of soft greys and grey-brown hues, and a broad, painterly touch, enlivened by vibrant little strokes of yellow and white in the scintillating highlights.

Kalf was born in Rotterdam in 1619, the son of a prosperous burgher.  Few details of his early life are known.  According to Houbraken, he studied with Hendrik Pot (c. 1580-1657) in Haarlem, but his youthful work seems more closely related to that of the Middelburg artist François Ryckhals (after 1600-1647), who painted peasant interiors in the Rotterdam tradition and pronk still lifes of metalware.  Kalf travelled to Paris while still quite young, arriving in the French capital sometime around 1639.  He remained there until 1646, living in the Saint-Germain-des-Près quarter of the city, an area frequented by many painters, both French and Flemish.  While in Paris, Kalf painted small-scale farmhouse interiors with prominent still-life elements, and more significantly, large still lifes of precious metalware gleaming in dark interiors, which are the precursors of his mature pronk still lifes.  After taking up residence in Amsterdam in 1653, Kalf turned his attentions wholly to the pronkstilleven -  still lives of luxurious objects - on which his great fame rests.

This painting, dated 1644, belongs to a group of about a dozen still lifes that Kalf painted during his stay in Paris.  The paintings in this category form a fairly homogenous group: generally upright in format, they focus predominantly upon finely crafted metalware objects, to which may be added a piece of fine Chinese porcelain, some fancy glassware, a nautilus shell, an orange, some oysters, and so on.  The objects in these paintings are grouped together in a seemingly careless fashion and often one or more vessels are overturned, or titled at an angle, in a way that enlivens the design and enhances the sense of recession.  Kalf was evidently fascinated by the way in which the variously polished, chased and finely wrought surfaces reflect the light, as well as by the distinctive properties of the individual materials.  A soft grey-brown colour scheme and a rich, dusky atmosphere are characteristic of his Parisian oeuvre.

The present painting, which exhibits all the features described above, is a superb example of the still very young artist’s work in this genre.  Kalf indulges his penchant for different kinds of metal vessels and with youthful enthusiasm demonstrates his virtuosity at rendering  different surface textures, whether the dull gleam of pewter, the metallic glitter of the relief on the silver-gilt ewer, the soft folds of the crumpled white cloth, or the translucent quality of the wine glass, with its glowing red contents.  Also effective is the suggestion of depth by means of the judicious placement of the objects and the use of illusionistic tricks: for example, the objects poised on the front edge of the table – the pewter plate, the cascading white cloth and the overturned flask, with its hanging chain and dark, gaping mouth – which seem to project forward from the picture plane into the viewer’s space and heighten the sense of immediacy.

In his Parisian still lifes Kalf worked with a relatively limited number of objects, which he arranged and rearranged in different combinations in an attempt to find new solutions to the problems of selection and composition.  The pilgrim’s bottles appear in a number of the Parisian still lifesiv, the silver candlestick occurs at least three timesv and a similar golden ewer is a prominent element in at least six other worksvi.  It is possible that some of these props belonged to the artist, but in the case of the elaborately worked silver-gilt ewer, it seems that Kalf derived its design from a print after Polidoro da Caravaggio of 1582.  A very similarly conceived still life, which must date from around the same time as ours, is in a private collection and was recently on loan to the Metropolitan Museum of Art, New York.  Though slightly differently arranged, the two pilgrim’s bottles, the candlestick, the ewer, the bread roll and the large silver salver all recur in that painting, in combination with a silver chafing-dish, a nautilus cup and several other objects.

After his return to the Netherlands, Kalf’s still lifes take on a very different character.  His compositions become calmer, very few objects are overturned, and the number of objects is greatly reduced.  His repertoire of objects is different too: he now focuses upon costly pieces of Chinese porcelain, Dutch and German glassware, finely wrought silver objects and Oriental carpets, together with lemons, oranges and the occasional pocket watch.  A richer colour palette is now employed and the evocative lighting effects which he first developed in Paris are brought to perfection.

Although Kalf’s primary concern here seems to have been to capture the sparkle of shiny objects in a dark setting, allusions to vanitas are not entirely absent from his composition.  The overturned flask and snuffed out candle are unmistakable symbols of transience and the brevity of life.  However, the interpretation of seventeenth-century Dutch still lifes is never a simple matter and opinion on the subject is as divided today as it was then.  The views of the artist and theorist Gerard de Lairesse, who greatly admired Kalf’s art, for example, seem contradictory: writing in 1707, he referred on the one hand to Kalf’s representations of precious objects as vanitases, but on the other, remarked that Kalf “could give us little Reason for what he did as other before or after him: He only depicted what occurred to him, a Porcelain Pot or Dish … without any thought of doing something of Importance which might bear some particular meaning or be applicable to something (vii)”.

Biography
Willem Kalf was baptised on 11 March 1619, the son of a successful textile merchant and a member of the Rotterdam Town Council.  His father died in 1625 and his mother in 1639.  The name of his teacher is not known.  Houbraken claimed that he studied with Hendrick Pot, but Kalf’s earliest works resemble the peasant interiors and still lifes of metalware by the local expatriate Flemish artist François Ryckhals.  Around 1639/40 and certainly by 1641 Kalf travelled to Paris where he was active until 1646: in October of that year he was back in Rotterdam.  In 1651, he married Cornelia Pluvier, a talented poet, composer and calligrapher, in Hoorn.  They both became Roman Catholics. Cornelia Kalf later met Constantijn Huygens, who wrote a poem in honour of her and her husband.  The couple had settled in Amsterdam by 1653 when Willem joined the local Guild.  Documents record his presence in Amsterdam from 1654 to 1690.  However, after about 1680 he seems to have worked primarily as an art dealer.  His last dated paintings are of 1679/80.  He died in Amsterdam on 31 July 1693.  Houbraken described Kalf as a friend and helpful man and a good raconteur, and praised his art and wide experience.  The poet Joost van den Vondel also offered poetic praise for Kalf’s art.
Download Essay
Browse all notable sales
©2021 Johnny Van Haeften Ltd - Registered Company No. 01345215
Web Design : naked ideas
CLOSE