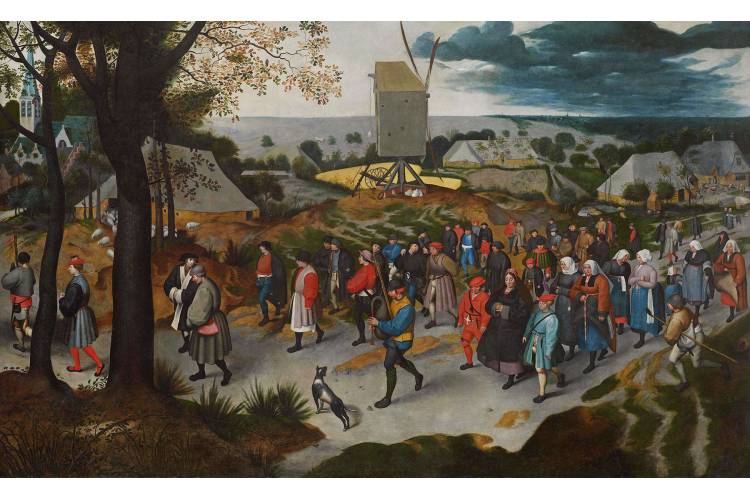 This year the gallery is delighted to present a varied group of paintings by Dutch and Flemish masters; the highlight of which is a monumental work by the 16th Century artist Marten van Cleve.   This powerful image of the wedding procession has long been associated with members of the Brueghel family, but recently this painting was recognised as a work by Marten van Cleve, a contemporary of Pieter Bruegel the Elder.  The composition is probably derived from a now lost painting by the elder Bruegel, but van Cleve’s treatment of the subject could very well have served as the model for later versions by Bruegel’s sons, Pieter the Younger and Jan the Elder.

Against the backdrop of rolling farmlands and a giant windmill, the wedding party makes its way along a road leading from the village on the left to the church in the upper right corner.  According to custom, the bride and groom walk separately, each of them processed by a bagpipe player.  First comes the groom, followed by the two fathers and the men of the village, then the bride, with the mothers and female members of the party, and finally a motley crowd of villagers and hangers-on.

The gallery has collaborated with William Lyons, a scholar of ancient music, who has composed a piece to be heard alongside the painting at the fair.  In his composition, the evocative sound of bagpipes, played on period instruments in the same key as the pipers in the painting, mingles with the natural sounds of the surrounding village to create a heightened sensory experience.  William Lyons has described his experience creating the piece below:

"This is a marvellous painting, full of character, with a series of small narratives that make up the whole of the casual wedding procession towards the church. In creating the soundscape for this, I considered the world of the villagers and the sounds they would have heard every day. Pigs, hens, a windmill are all there in the background whilst in the foreground a dog twists excitedly, pursued by its master. Other elements not depicted are included: footfall on the dry earth, the wind rustling through the leaves of trees, birdsong. The bells of the church start to toll and, central to the sound world as it is central to the painting itself, is the joyful skirl of the bagpipes. The use of pipers in processions was common all over Europe at this time and I chose a Flemish tune of the mid sixteenth century for the two pipers to play. The instruments I play on the recording are copies of just the kind of instruments depicted. Moreover, I could see that the central piper is playing an E on his pipes, so I made sure that it occurred in the recording and the piece was in a suitable key. Finally, the procession passes, the bells fade, the pipers cease and nature sighs through the trees and a fly weaves its way above the lane."

For more information and to book tickets please follow this link